The Impact of Transportation Electrification on Public Health 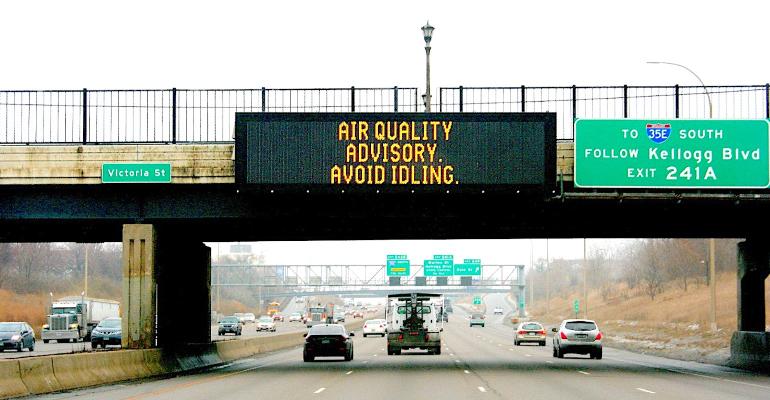 As traffic continues to worsen, air pollution advisories for ozone and particulates become more frequent.
Could transportation electrification save lives in addition to saving the planet?

It doesn’t take any special genius to understand that an electric vehicle (EV) produces less climate-changing greenhouse gas (GHG) emissions than a vehicle with a conventional internal combustion engine (ICE). 29% of GHG emissions in the US come from the transportation sector and 60% of that comes from light-duty vehicles. With an efficiency three times that of an ICE vehicle, and even with a relatively dirty, fossil-fuel-powered electric power grid (only around 17% of electric power on the grid comes from renewable sources), it’s pretty clear that EVs are one of the primary ways to cut back on GHG emissions to help mitigate climate change.

The advantages that come from moving the emissions source away from a vehicle’s tailpipe and centralizing it at an electric power plant are not just reductions in climate change. Air pollution from ICE automobiles and trucks—primarily ozone (O3) and particulate matter (PM)—causes between 19,300 and 54,000 premature deaths per year in the US. A 2015 International Council on Clean Transportation report estimated that the US experienced 22,000 transportation deaths that year attributable ambient PM2.5 and ozone. Those numbers are roughly on par with the 35,000-40,000 US traffic deaths that occur each year from accidents.

Ozone forms from O2 (oxygen) by the action of ultraviolet (UV) light and electrical discharges in the Earth’s atmosphere at between about 10 and 50 kilometers (6-13 miles) above the surface. It forms a low-concentration layer in the stratosphere, which absorbs most of the Sun's ultraviolet (UV) radiation, protecting life on the planet from the UV ray’s harmful effects.

Low level ozone is something else. It is one of the most prevalent atmospheric pollutants and results from the action of UV rays from the sun on a group of pollutants called ozone precursors. The ozone that forms near the ground comes primarily from precursors formed during the combustion of fossil fuels, although methane is also a natural precursor. The reaction of sunlight on air containing hydrocarbons and oxides of nitrogen form ozone at the source and in the surrounding area. Areas with high traffic densities have high levels of ozone, especially in summer months when the solar radiation is highest.

Ozone is a powerful oxidant and causes damage to mucous and respiratory tissues in animals, and tissues in plants, particularly in concentrations above about 0.1 ppm. An increase in death from respiratory illness has been shown due to long term-exposure to ground-level ozone with studies revealing cities like Los Angeles and Houston having high ozone levels with an overall 30% increased risk of dying from lung disease. 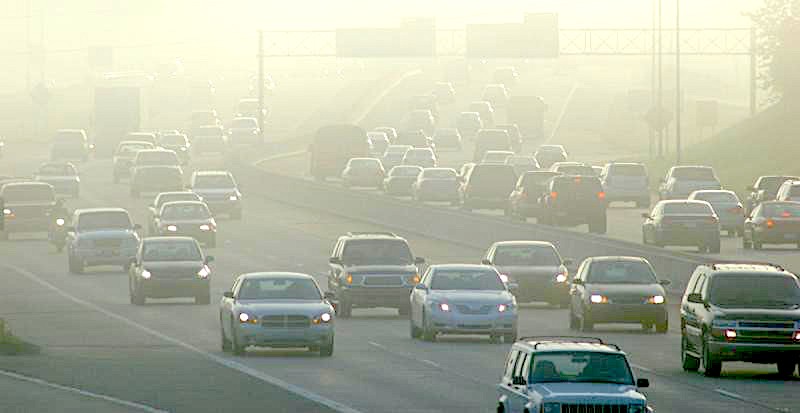 Smog is created from the interaction of sunlight with hydrocarbons and oxides of nitrogen from fossil fuel combustion.

Particulate matter (also called fine particulate matter, or PM2.5) are air pollutant particles with a diameter of 2.5 micrometers or less. This makes them small enough to invade even smallest airways in the lungs. One of the largest sources for PM2.5 particles is the burning of fossil fuels and about 90% of populations living in cities are exposed to particulate matter concentrations that exceed the WHO air quality guidelines. Fine particulate matter is associated with heart attack, stroke, lung cancer and other diseases. A study of national data by the University of Minnesota showed that about half of all PM2.5 air pollution-related deaths are from burning fossil fuels. The other half comes largely from animal agriculture (animal manure and crop fertilization), from dust from construction and roads, and from burning wood for heating and cooking.

And Then There’s COVID

EVs Can Make A Difference

Researchers at Northwestern University did a study, published in the journal GeoHealth found that “Vehicle electrification in the United States could prevent hundreds to thousands of premature deaths annually while reducing carbon emissions by hundreds of millions of tons,” according to Daniel Peters, who led the study. “This highlights the potential of co-beneficial solutions to climate change that not only curb greenhouse gas emissions but also reduce the health burden of harmful air pollution,” he added in a Northwestern news release.

“A good example is to look at nitrogen oxides (NOx), a group of chemicals produced by fossil-fuel combustion,” Peters explained. “NOx itself is damaging to respiratory health, but when it’s exposed to sunlight and volatile organic compounds in the atmosphere, ozone and particulate matter can form.”

To simultaneously simulate the atmosphere’s weather and chemistry, the Northwestern researchers used a chemistry-climate model developed at the Geophysical Fluid Dynamics Laboratory. The model included simulations of how emissions from combustion engines and power generation sources interact with each other and other emissions sources in their environments.

“The social cost of carbon and value of statistical life is much-studied and much-debated metrics,” Daniel Horton, senior author of the study said. “But they are regularly used to make policy decisions. It helps put a tangible value on the consequences of emitting largely intangible gases into the public sphere that is our shared atmosphere." The study found that “if EVs replaced 25% of the combustion engine cars currently on the road in the United States, the country would save about $17 billion annually by avoiding damages from climate change and air pollution.” The study predicted 437 fewer deaths due to PM2.5 and 98 fewer ozone-related deaths.

If the number of EVs climbed to 75% of all cars on the road with the present power grid the result would be 1,576 fewer PM2.5 deaths and 420 fewer ozone deaths.

The big payoff comes, however, when substantial numbers of EVs are combined with adoption of low to zero-emission electricity generation—the savings could reach as high as $70 billion.  With EVs at a 75% level, and with double the amount of renewable energy on the grid, PM2.5 deaths are reduced by 2,939 per year, while ozone-related deaths drop by 366 per year, according to the Northwestern study.

We have to get this right. If we are learning anything from 2020, its that we need to look at much bigger pictures when it comes to public health and social welfare. The emphasis of moving to an electrified transportation system has always been to help mitigate the long-term effects of climate change through the reduction of greenhouse gasses. As important as that is, Northwestern’s study has shown EVs have the potential, along with a revised power grid with more renewable energy sources, to prevent deaths due to respiratory illness, all the while saving a substantial amount of money. It doesn’t take a genius to see where we need to go.