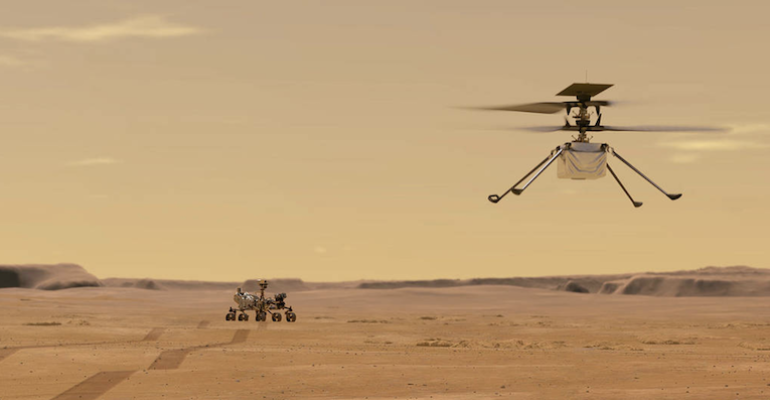 A small lithium-ion battery-powered helicopter is number one for take-off on its makeshift Martian airfield.

Sometime during this month, a small battery-operated helicopter will take off from the Martian surface, make a brief flight, and then safely land again on the red planet. Not only will this flight be the first time NASA or any human space agency has accomplished a takeoff and landing on an extra-terrestrial world, but it also represents a triumph for the primarily commercially available, hobby-level parts, batteries, and components that make up the Mars rotorcraft.

Ingenuity, NASA’s Martian helicopter, was delivered to the Jezero Crater on the surface of Mars on February 18, carried on the bottom of the Perseverance Rover. Weighing just 4 pounds (1.8 kg), Ingenuity’s simple mission is to prove powered flight is possible in the thin atmosphere of Mars. Although the gravity of Mars is about one-third that of the Earth (meaning Ingenuity weighs about 1.5 pounds there), the planet’s atmosphere is only 1% as thick, making it difficult for an aircraft to generate aerodynamic lift.

You Could Build This At Home

Although Ingenuity was designed and built by flight pioneer AeroVironment, Inc. and NASA’s Jet Propulsion Laboratory (JPL), it bears striking similarities to the types of buzzing drones that hobbyists back on Earth fly. The rotorcraft is 19.2 inches tall and has two, 4-foot-long counterrotating carbon fiber blades that spin at up to 2,400 RPM. The tilt of the flour propellor blades to control the lift and direction of flight is handled by six 10-millimeter in diameter miniature brushed DC motors made by Swiss-based motor maker maxon. Although it has no scientific instrumentation, it does carry two cameras: one color to show terrain images, and a black-and-white one to aid with navigation.

At the heart of the Ingenuity craft are six lithium-ion batteries that any electronics hobbyist would probably recognize. They are Sony SE US 18650 VTC4 cells that are commonly used for a variety of home-built projects and to power drones and flying machines here on Earth. The nameplate capacity of each of the Sony cells is 2 amp-hour and the maximum discharge rate is 25 amps with a maximum cell voltage of 4.25 volts. The total power capacity of the pack is 480 watts with a peak power capacity of 510 watts. The total weight of the six cells (on Earth) is just 273 grams. The battery capacity is 35.75 watt-hours (Wh), of which 10.73 Wh (30 percent) is kept as reserve, while approximately 10 Wh is available for flight operations. This allows flight times of up to about 90 seconds at about 80 percent (or about 360 watts) of total power capacity.

Although Ingenuity will receive its initial pack charge from its Perseverance Rover buddy, recharging of the flight drone is accomplished with a solar panel made from Inverted Metamorphic (IMM4J) cells made by SolAero Technologies. These particular cells are optimized for the solar spectrum that reaches Mars and have an active cell area of 544 square centimeters. The solar panel is placed immediately above the pair of rotors.

The batteries and solar panels are the only energy supply for Ingenuity once it has left the rover. That’s important because the helicopter must survive nighttime temperatures that can drop below -100°C. Critical components in the drone must be kept above -15°C to avoid permanent damage, so Kapton film heaters are attached to the outer surfaces of the lithium-ion cells and electronic components are clustered near the cells to help them stay warm. Prior to flight, thermal systems activate to bring the battery cells up to 5°C so that they can produce adequate power output. The cells warm up further during operation, but flight durations are so short, they do not overheat. 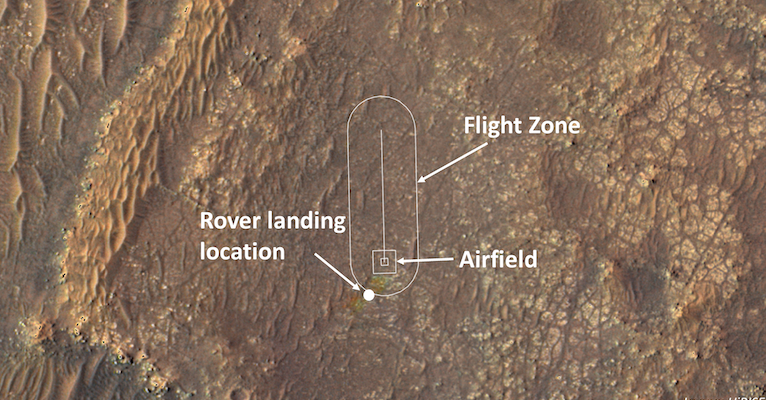 This image shows the “airfield” where NASA’s Ingenuity Mars Helicopter team will attempt its test flights.

Ingenuity will fly from a 33-foot by 33-foot (10-meter by 10-meter) airfield that has been chosen to be level and present no obstacles to the flyer. Ingenuity communicates with NASA through a link with Perseverance, but because it takes almost 12 minutes for a signal from Earth to reach Mars, the entirety of the flight operations must take place autonomously. The helicopter is designed with a maximum flight speed of 22 mph, a ceiling of 15 feet, and a range of slightly less than 1,000 feet. None of these are that much different than the flight envelope of the original aircraft flown by the Wright Brothers at Kill Devil Hill.

In fact, as the first aircraft to fly on a planet other than Earth, Ingenuity is carrying a special memento—a postage-stamp-size piece of the original Wright Flyer that made the first controlled powered flight on Earth on December 17, 1903, has been carefully taped to a cable on the underside of the drone’s solar panel. “We are very proud to honor that experimental aircraft from long ago by carrying a small piece of fabric on Ingenuity,” said Bob Balaram, Ingenuity’s chief engineer, during a press conference on March 24, 2021. Ingenuity is expected to make its first flight sometime during the month of April.