Lifting the Limits of Battery Cathodes with Lithium 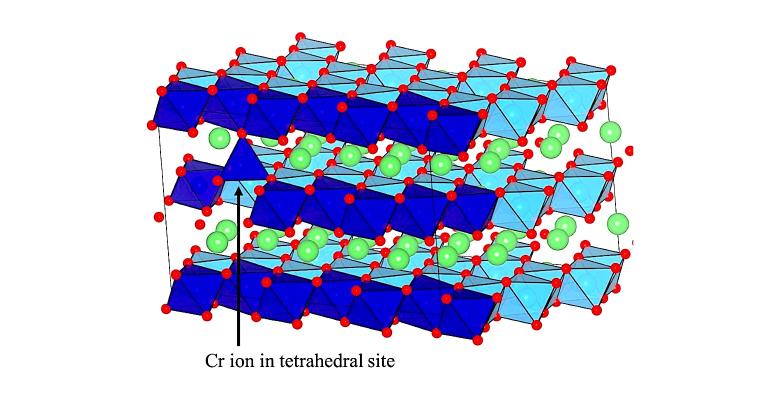 Simulations capture migrating chromium atoms within the model, lithium-rich cathode.
A combination of computer simulation and lab benchwork provides some surprises in the study of lithium-rich oxides that could be used in battery cathodes.

Although lithium-ion batteries are proving to be an effective energy storage device for everything from electric vehicles (EVs) to renewable electric power grids, their storage capabilities are limited by their cathode materials.

Commercially available lithium-ion batteries rely on a cathode made from layers of transition metal oxides. The batteries operate through the movement of lithium ions between the cathode and the anode electrodes when charging and discharging. The most common cathode material, NMC, uses nickel, manganese, and cobalt to make up the layers. Aluminum is sometimes substituted for manganese, in the NCA cells used by Tesla, for example. The metal oxide cathodes result in batteries with energy storage capacities of about 200 mAh per gram.

If it were possible to move more lithium, initially contained in and supplied by the cathode, more current would be available to power everything from phones and laptops to EVs and airplanes. There is a class of lithium-rich materials that might fit the bill.  “Lithium-rich oxides offer the possibility of more sustainable and cost-effective options over many current technologies as they can be made predominantly of Earth-abundant elements, with manganese being the most promising candidate,” said Jason R. Croy, a physicist in Argonne’s Chemical Sciences and Engineering (CSE) division, in an ANL press release.

Elements like lithium, chromium, manganese, titanium, oxygen, and fluorine arrange themselves in complex ways at an atomic level when they are incorporated into oxides used in a battery cathode. Researchers at Argonne National Lab (ANL) found that oxygen participates in the generation of current in these lithium-rich oxides, something that does not occur in traditional lithium-ion batteries. This allows higher energy storage capacities, greater than 300 mAh per gram.

But there is a problem. Cathodes using lithium-rich oxides exhibit an energy inefficiency, a hysteresis between charging and discharging and therefore the amount of energy needed to charge the battery is significantly more than the energy returned on discharge.

It has been generally accepted that the oxygen in the lithium-rich oxides has been responsible for this hysteresis effect and most previous research has focused on oxygen. But scientists at ANL decided to examine if that was truly the case.

The ANL press release explained it thusly: “To advance our understanding of hysteresis and gain insights on other mechanisms that play an important role, the researchers designed an experiment based on a model, lithium-rich oxide. This material is a model because it contains substantial amounts of lithium and displays a hysteresis between charge and discharge; however, oxygen does not participate in the charge/discharge processes of the cell. Through the design of this system, along with theoretical calculations and measurements of working cells, the team showed that the movement of elements, in this case, titanium and chromium, between certain sites within the oxide was the sole cause of hysteresis in this material — not the processes directly involving oxygen.”

The result shows that all lithium-rich materials form similar atomic-level configurations, and regardless of oxygen’s participation in the charge/discharge processes, the movement of other elements within the materials can also occur.
Lithium-rich oxides provide an avenue to attain high-energy, cost-effective, cobalt-free oxides. “Working on this project allowed us to design a modeling experiment to address the specific fundamental question of oxygen redox in a model system,” said Hakim Iddir, a physicist in CSE.

The actual work required a high degree of coordination among several researchers. According to the ANL release, Iddir and Juan C. Garcia, an assistant materials scientist in CSE, performed the computational analysis to verify the design goals and gained insights into the mechanisms that took place during electrochemical reactions. Meanwhile, Croy synthesized the designed cathode material, performed electrochemical analyses, and participated in synchrotron X-ray studies.

Steve Trask, an engineering specialist at the Cell Analysis, Modeling and Prototyping (CAMP) Facility, worked with the team to design and build cells that could be probed by X-rays in a working cell. “The CAMP Facility was critical in the design and fabrication of cells tailored to this study,” said Croy. “The range of X-ray energies used, along with electrode thickness and cell designs that enable practical electrochemical operation, all had to be taken into account.”