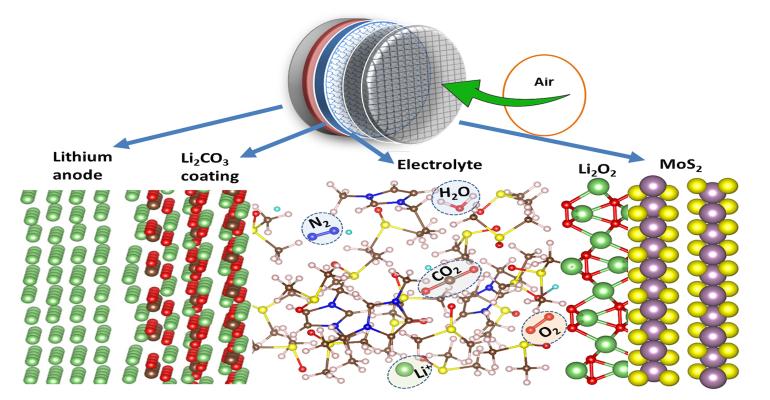 Lithium-ion batteries are proving themselves in applications as diverse as cell phones and electric vehicles (EV). The push is on, however, to develop ever more powerful and energy-dense battery storage systems. One that looks promising is the lithium-air battery, whose initial concepts date back to 1987. Where lithium-ion batteries have capacities of 387 watt-hours per kg (Wh/kg), rechargeable lithium-air batteries could offer capacities as high as 3500 Wh/kg.

The key to the high capacity of a lithium-air battery is the use of lithium metal as the anode. In lithium-ion batteries, the anode is typically made up of carbon graphite sheets that store lithium ions in their structure during charging via a process called intercalation. When the battery is discharging during use, the lithium ions travel out of the graphite anode, through the electrolyte, and into the cathode, which is typically made from a metal oxide.

Rather than using the graphite anode, lithium metal can be used to provide the lithium ions needed at a much higher rate. When charging a lithium-ion with a metal anode, spikey crystals of lithium, called dendrites form and they can grow large enough to short out the battery and cause a fire. Researchers worldwide are looking at sold or semi-solid electrolytes that would suppress the growth of dendrites and allow the use of lithium metal anodes, but no large scale commercialization has yet been achieved.

Lithium-air batteries can take advantage of the higher rate of lithium ions available from a lithium metal anode. Rather than use a cathode made from a metal oxide, however, the positive electrode is porous and exposed to the air. During discharging, lithium metal at the anode is oxidized to Li+ and moves through the electrolyte to the air cathode. In the meantime, oxygen accepts electrons from the external circuit and combines with Li+ to form lithium peroxide (Li2O2) as a discharge product. When charging the battery, the electrochemical processes are reversed.

The present lithium-air batteries have some drawbacks, such as low energy efficiency, short cycle life, and poor rate capability. The main reasons are the slow oxygen reduction reaction (ORR) and oxygen evolution reaction (OER) rates and slow mass transport on the cathode side. To improve the ORR and OER rates, researchers are looking at a variety of cathode materials and the addition of catalysts that can accelerate the electrochemical reactions. 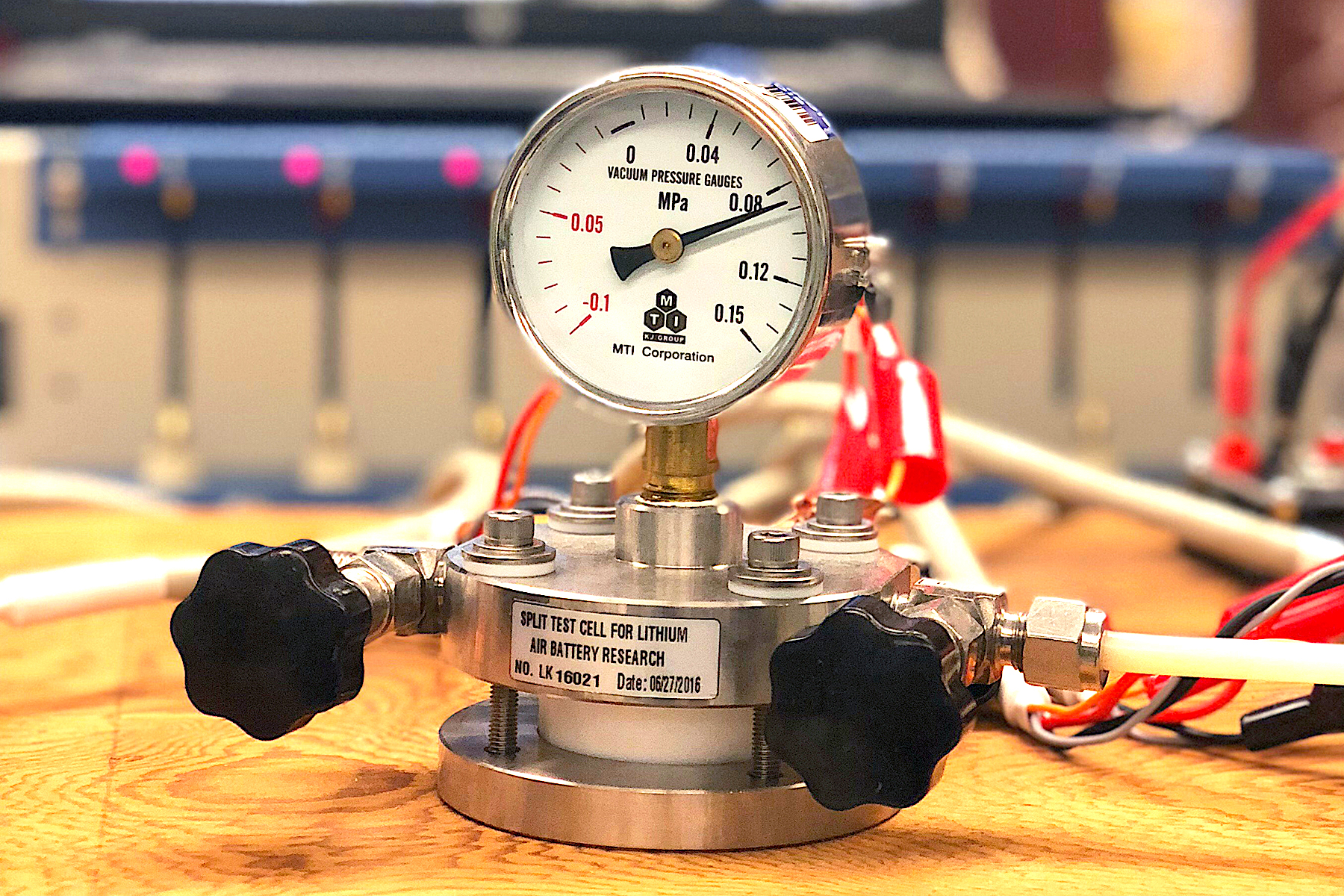 Precious metals such as gold, platinum, and palladium can be used as catalysts to improve the kinetics of the reactions by a factor of about ten. The cost of these materials is a large stumbling block, so research into other catalytic materials such as transition metals and their oxides, carbides, nitrides, and sulfides. Researchers have found that oxygen vacancies can improve the electronic conductivity and migration of the lithium ions as well as serve as active sites for O2 and Li2O2. Creating oxygen vacancies is a very common method to improve the performance of transition metal oxides. It has been found that cobalt oxide catalysts have good performance characteristics, but just as with the use of cobalt in lithium-ion batteries, the uncertain sourcing and high price of cobalt makes this transition metal less attractive.

Researchers at the University of Illinois at Chicago (UIC) and Argonne National Laboratory have reported on a lithium-air battery that works in a natural air environment and still functioned after a record-breaking 750 charge/discharge cycles. The UIC-Argonne research team uses a unique combination of anode, cathode, and electrolyte to prevent anode oxidation and a buildup of harmful reaction byproducts on the cathode and that allow the battery to operate in a natural-air environment.

They coated the cathode lattice structure with a molybdenum disulfate catalyst and used a nonaqueous hybrid electrolyte made of ionic liquid and dimethyl sulfoxide, a common component of battery electrolytes, to facilitate lithium-oxygen reactions, minimize lithium reactions with other elements in the air, and boost the efficiency of the battery. They report that during cycling a stable layer of lithium carbonate (Li2CO3) is created on the anode that selectively allows lithium ions from the anode to enter the electrolyte while preventing other unwanted reactions with the air and the electrolyte.

“Our lithium-air battery design represents a revolution in the battery community,” said Amin Salehi-Khojin, assistant professor of mechanical and industrial engineering in a UIC release.  “This first demonstration of a true lithium-air battery is an important step toward what we call ‘beyond lithium-ion’ batteries, but we have more work to do in order to commercialize it.”