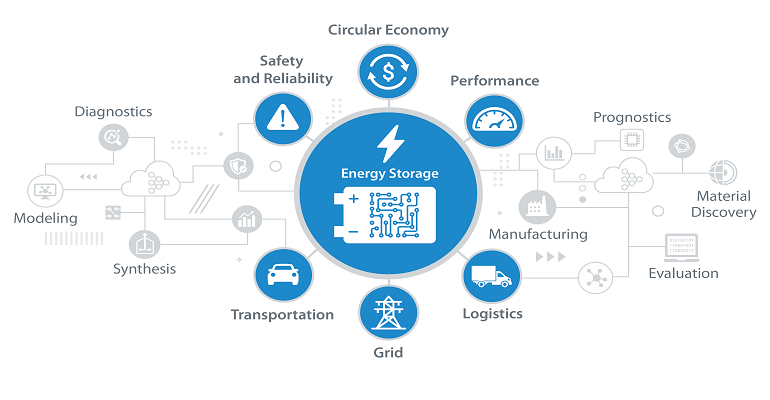 Machine learning is being used to develop better algorithms to predict lithium-ion battery safety, lifetime, and performance degradation in order to meet consumer needs.
NREL is using machine learning to move the accuracy of battery modeling far beyond previous efforts.

Battery research continues to reach new levels of sophistication. It isn’t enough to throw together a negative electrode (anode) and a positive electrode (cathode), along with an electrolyte that allows the transfer of ions between the electrodes and hope for the best. Consumers are pushing for electric vehicles (EV) that can travel more than 300 miles on a charge, and cell phones that last for days on a single charge, and the only way to get there is through the highest levels of materials and chemical research and engineering.

Lithium-ion batteries are an interesting case. They power EVs, laptop computers, and personal electronics, and serve as a backup resource for electrical power grids. The mechanism by which a lithium-ion battery works is not simple. During charging, for example, positively charged lithium ions travel from the cathode, which is generally made from a metal oxide material, through the electrolyte to the anode, which is made from carbon graphite. The lithium ions move between the planes of the graphite in a process called intercalation. When the battery is discharged, the lithium ions move out of the graphite anode, travel through the electrolyte, and then intercalate within the crystal structure of the cathode materials.

Battery researchers use their experience to develop battery lifetime models that use algebraic and differential equations to help mimic and predict the physical degradation processes. But researchers are often limited to small data sets and it is difficult to create accurate model equations that are valid for a variety of battery types and conditions. That’s why the National Renewable Energy Laboratories (NREL) has developed machine learning (ML) to characterize battery performance, lifetime, and safety.

For example, NREL researchers recently used machine learning to identify the most effective models to predict battery lifetime and performance. The NREL-developed algorithm analyzed a number of existing models to identify crucial equation components and generate a model that would run with a reasonable amount of computer time. This new model used battery aging data to determine lithium-ion battery capacity fade rates more accurately and with more confidence than had been possible with conventional models.

“The machine-learning method automatically discovered factors that, as scientists, we know lead to accelerated battery degradation,” said Kandler Smith, who leads NREL’s battery computational modeling team. “This physical underpinning gives us confidence in their predictive capability. Accuracy is double that of our previous human-expert models.”

Another area of interest for machine learning at NREL is battery safety. Because individual cells do not always react in the same ways to abuse, a full understanding of lithium-ion battery failures is difficult. According to the NREL release, “Physics-based machine learning adds a fresh perspective to existing prediction models, integrating electrical, thermal, acoustic, and mechanical data to identify when and how failure will occur. Simulation data supported by these experiments will help researchers pinpoint safe operating conditions and cell designs for increased safety, as well as informing engineers of the specific hazards associated with failure to facilitate design of safer battery systems.”

"The ability to accurately predict hazardous failure scenarios of batteries will lead to substantial improvements in the safety of battery systems," said NREL energy storage researcher Donal Finegan. "Interfacing physics-based modeling and machine learning with experimental data may accelerate the design of safer and more reliable cells and battery systems.”

To access the high-quality and robust open-source data needed to accelerate the development of ML algorithms that match well with complex lithium-ion battery physics, NREL has made available through open-source the following databases:

The development of these databases, and the machine learning algorithms, along with NREL work with other national laboratories and collaborators are pushing the understanding and development of lithium-ion batteries to new, unexpected levels.