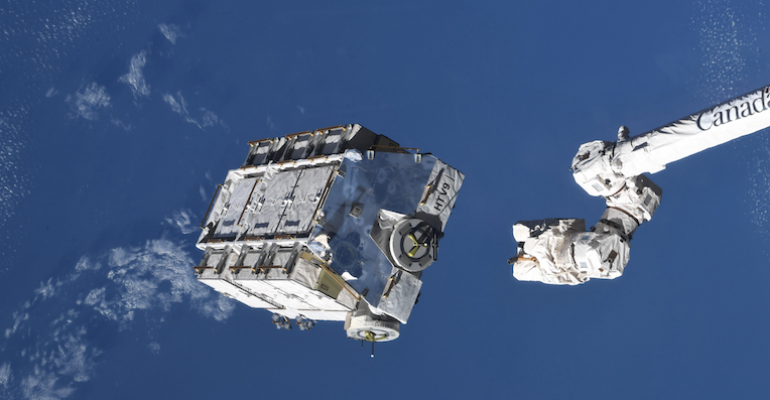 The International Space Station has jettisoned 2.9 tons of outdated and spent batteries after replacing them with lithium-ion cells.

NASA released a 2.9-ton pallet of spent nickel-hydrogen batteries from the International Space Station (ISS) on March 11. From 2017 through 2020, 24 new lithium-ion battery packs have been delivered to the ISS via the Japanese HTV cargo freighter supply ship. The 48 spent batteries were loaded onto an HTV pallet over the course of the battery replacement, which required a series of spacewalks over several years.

According to a story in Spaceflight Now, the pallet of old batteries is the largest item ever jettisoned from the Space Station. It was released by the ISS robotic arm some 265 miles above the Earth’s surface. As reported in the story, the refuse is expected to remain in orbit for 2-4 years before it finally burns up when re-entering the Earth’s atmosphere.

Nickel hydrogen batteries were first developed in the early 1970s for use in the US space program. They use hydrogen in a gaseous form and nickel electrodes. The advantage of the design is a very long service life and an ability to handle more than 20,000 charge and discharge cycles. The disadvantage of the nickel-hydrogen battery is its relatively low energy density—about a third that of the modern lithium-ion batteries which have replaced them in the Space Station.

The image above is of the HTV pallet of batteries that has just been released by the ISS robotic arm. The photograph was taken by astronaut Mike Hopkins and posted on his Twitter account.