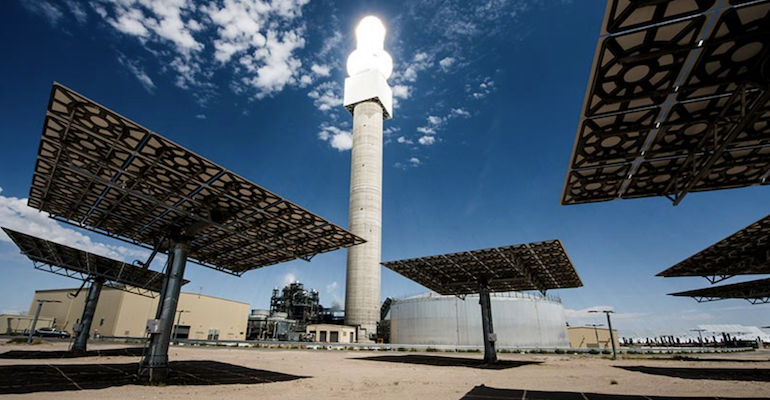 Over 10,000 tracking heliostats focus solar energy at the receiver on the 640-foot power tower at the Crescent Dunes Solar Thermal Facility in Nevada. The facility is representative of concentrating solar power modeled in the Annual Technology Baseline
The Annual Technology Baseline (ATB) provides researchers a consistent data set to build cost and consumption models.

Every year, a team of analysts from the U.S. Department of Energy’s (DOE) national laboratories integrates current and projected data for electricity-generation technologies into one user-friendly tool. It is led by the National Renewable Energy Laboratory (NREL) and the result is the Annual Technology Baseline (ATB).

Based on a Need

Related: Can Renewables Stabilize and Support the Power Grid? Hawaiians Will Find Out

The ATB was created because there was no existing database with the level of nuance on technology innovation that energy analysts need. As a national laboratory dedicated specifically to renewable energy, NREL partners with Oak Ridge National Laboratory to dive into those nuances for renewable generation technologies. The challenge of aggregating energy data from different sources into studies is knowing whether the data uses consistent assumptions. The ATB resolves this challenge by creating consistent assumptions across all electric generation technology cost and performance data. Without the ATB, analysts would have to seek out data in many places and are likely to have inconsistent assumptions.

All renewable energy technologies are represented in the ATB. In this Q&A, solar power technology leads and NREL analysts—David Feldman, Chad Augustine, Parthiv Kurup, and Craig Turchi—share their insight on why the ATB is unique and what is new in terms of solar photovoltaics (PV) and concentrating solar power (CSP) in the 2021 update, including new technologies, expanded financial data, and better interoperability with other models.

The ATB is useful for analysts and researchers who are trying to model the electric grid, or individual technologies, in the United States or internationally. The report covers cost and performance metrics that include upfront costs, operating costs, system performance, and financing costs for most technologies over a 30-year period. These values can be used to calculate a Levelized cost of energy (LCOE)—an important metric of comparison between electricity generation technologies—as well as other factors, such as the value of the energy.

Recently, the California Energy Commission and Cal-ISO [California System Operator] commissioned modelers to look at the future of their grid. They use the ATB for their model inputs to understand the impacts of policy with high renewables deployment. Internationally, organizations like the energy department in Chile have utilized the ATB costs in their scenarios and comparing them to costs in the market as a validation.

Although all renewable energy technologies are represented in the ATB the current issue (July 2021) features the insights of solar power technology leads and NREL analysts David Feldman, Chad Augustine, Parthiv Kurup, and Craig Turchi on what is new in terms of solar photovoltaics (PV) and concentrating solar power (CSP), including new technologies, expanded financial data, and better interoperability with other models. They discuss CSP technology in the form of a molten salt power tower with two-tank thermal energy storage, which drives a Rankine steam cycle. The system uses molten sodium and potassium nitrate as the heat transfer fluid and the energy storage media.

The ARTB has also been useful to spot trends in the cost and performance of solar technologies. “Generally, performance has increased, and cost has decreased, dramatically for PV and overall in CSP,” the NREL reports. “The ATB has shown us there are several paths forward for continued price reduction. In the Standard Scenarios studies, you can see that when price decreases, renewable energy can become a significantly larger share of U.S. electricity generation. When that happens, there is also a lot of opportunity for greater deployment of storage technologies.”