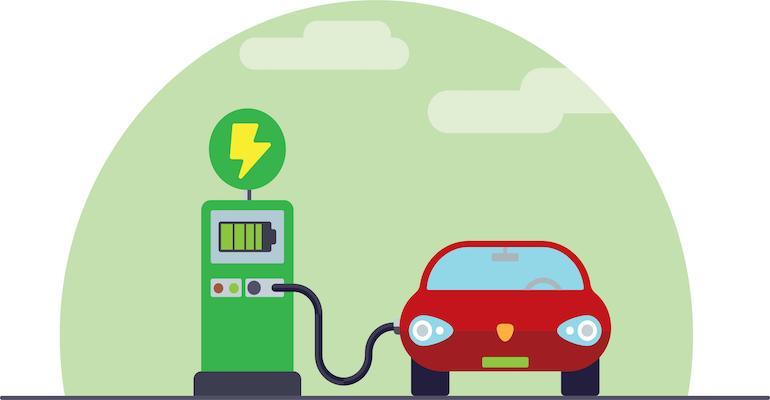 Scientists claim that they can leverage resources using quantum techniques to greatly speed up the charging process from 10 hours to three minutes.

Researchers have turned to quantum physics to find clues in how they can create batteries for electric vehicles (EVs) that can charge as fast as or even faster than it takes to fill up a tank of gas.

A team of scientists from the Center for Theoretical Physics of Complex Systems within South Korea’s Institute for Basic Science (IBS) explored how to optimize quantum batteries for EVs, identifying how much charging speed can be achieved within this type of system.

Currently, EVs take about 10 hours to fully recharge at home, with the fastest superchargers at charging stations taking about 20-40 minutes for a full recharge. Ideally, to make these cars more attractive to consumers, charging the battery should take no longer than the few minutes refueling a car with a tank of gasoline does.

To address this problem, scientists at IBS decided to turn to the field of quantum physics, a still oft-mysterious field that studies matter and energy at the most fundamental level, aiming to uncover the properties and behaviors of nature’s building blocks.

Related: 6K and Our Next Energy to Collaborate on Low-Cost Cathode Material

In their research, the team discovered that quantum technologies may provide new mechanisms to charge batteries at a faster rate. These so-called “quantum batteries” – proposed by scientists in 2012—theoretically would use quantum resources, such as entanglement, to speed up the battery charging process significantly by charging all cells within the battery simultaneously in a collective manner, researchers said.

Indeed, large-capacity batteries such as the ones required for EVs typically contain numerous cells, and the advantage of charging them all collectively—over charging them in parallel independent of one another--can be measured by the ratio called the “quantum charging advantage,” researchers said.

Researchers already know that there are two possible sources behind this quantum advantage—one called “global operation,” in which all the cells talk to all others simultaneously, and “all-to-all coupling,” in which every cell can talk with every other but only a single cell at a time.

However, so far it’s been unclear whether both these sources must occur simultaneously for a charging advantage, and also whether there are any limits to the charging speed that can be achieved.

The IBS team decided to explore these questions and came up with some answers that provide a foundation for creating faster-charging EV batteries, researchers said.

One discovery they made is that all-to-all coupling is irrelevant in quantum batteries; another is that the presence of global operations is the only ingredient in the quantum advantage, they reported.

The group also pinpointed the exact source of that advantage while ruling out any other possibilities for design, providing a blueprint for how to develop a quantum battery with optimized charging, researchers said. 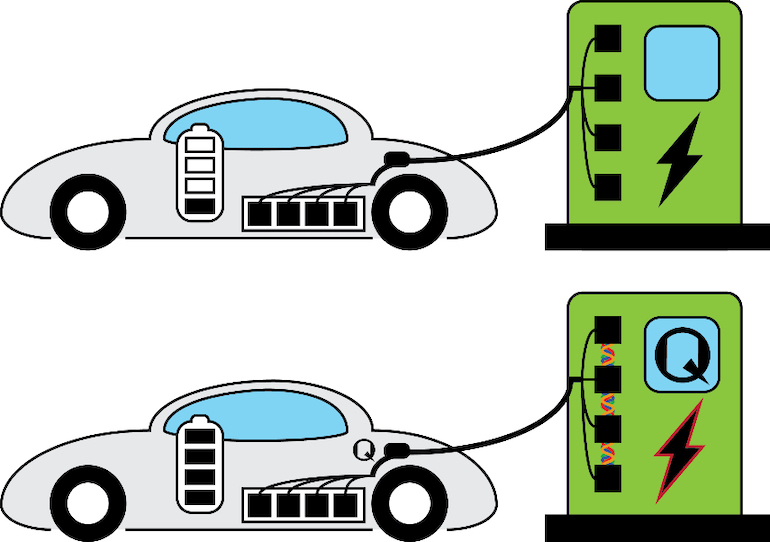 A pictorial illustration of current electric vehicles (EVs) versus the future EV based on a quantum battery. Employing quantum charging would lead to a 200 times speed boost in a typical EV, which means that the charging time would be cut from 10 hours to about 3 minutes (at home), or 30 minutes to 9 seconds at a charging station, researchers found

From Hours to a Few Minutes

Further, the team also quantified specifically how much charging speed can be achieved in their quantum design. While the maximum charging speed increases linearly according to the number of cells in classical batteries, IBS researchers found that quantum batteries using global operation can achieve quadratic scaling in charging speed.

For example, if one considers that a typical EV battery contains about 200 cells, employing quantum charging would lead to a 200-times boost in speed over classical batteries. That has the potential to turn at-home charging time from10 hours to about three minutes, researchers said. Further, at charging stations where a battery can charge in 30 minutes, a quantum battery theoretically can charge in mere seconds, researchers said.

Researchers published a paper on their work in the journal Physical Review Letters.

The impact on future EV battery design is massive, though the exploration into quantum batteries is still very much in its early phases, researchers said.

Moreover, EV batteries are not the only field for which their work has implications, they said. For example, the research can be applied to future fusion power plants, which require large amounts of energy to be charged and discharged in an instant, researchers said.