HomeIndustry OutlookSolar Cells Used for Rapid Underwater Wireless Communication
Recent
Industry Outlook
How the US Can Catch China in the Battery Race
May 17, 2022
We Must Keep EVs from Overpowering the Grid
May 17, 2022
Ford's Electric F-150 Lightning is a Real Pickup Truck
May 17, 2022
Volkswagen’s Electric Successor to the International Scout 4x4
May 17, 2022
What's Behind Booming Battery Prices?
May 17, 2022
Quantum Physics Holds Key for Faster-Charging EV Batteries
May 13, 2022
BASF Brings Battery Protection Solution to Ford F-150 Lightning
May 12, 2022
Solar Cells Used for Rapid Underwater Wireless Communication
May 10, 2022 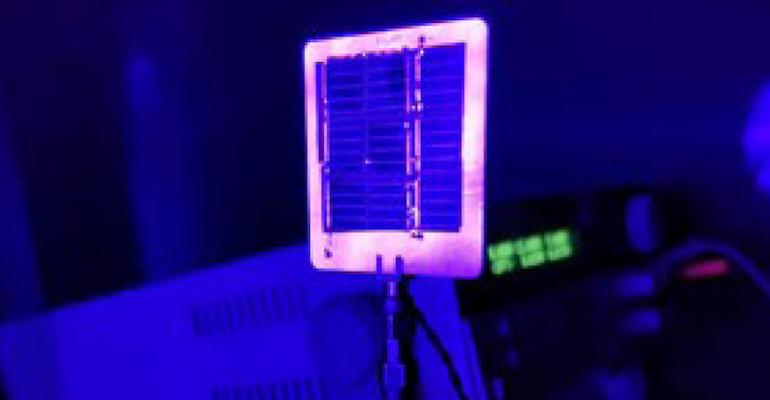 Researchers showed that high data rates can be achieved by using an array of solar cells as the detector in an underwater wireless optical communication system
Researchers in China have developed an array of series-connected photovoltaic devices as detectors that they said can offer a cost-effective, low-energy way to transmit data.

Solar cells are known best for their ability to turn sunlight into electricity. However, scientists are discovering that they have a range of other uses, such as water desalination and a more recent discovery—to achieve underwater wireless optical communication with high data rates.

Researchers at Zhejiang University in China developed an array of series-connected solar cells as detectors that they said can offer a cost-effective, low-energy way to transmit data underwater. This could serve a current need for this type of communication to support ocean-protection activities that need to transmit data underwater, said Jing Xu, a professor at the university who led the research.

The system developed by Xu and his team uses commercially available solar cells to create an array that offers a larger optical-detection area than photodiodes, which traditionally have been used as detectors in wireless optical communication, he said.

One such use of the system, for example, would be to transmit data from divers, submarines, underwater sensors, and unmanned autonomous water vehicles to surface ships in coral-conservation efforts, Xu said.

Typical light-based underwater wireless communication exhibits higher speed, lower latency, and requires less power than communication-based on radio or acoustic waves. However, most long-distance high-speed optical systems are not practical for use underwater because they require strict alignment between the transmitter emitting the light and the receiver that detects the incoming light signal, researchers said.

Solar cells, however, can detect light from a large area and convert it to an electrical signal. Using them as detectors for underwater optical communication, then, can ease the requirement to place the transmitter and receiver in a specific alignment. However, so far it has been difficult to achieve high bandwidth because solar cells are optimized for energy harvesting rather than communication, researchers said.

Aware of these previous limitations, Xu’s team used modeling and simulation of connected solar cells to optimize the peripheral circuit, which significantly improved the performance of the solar cell-based detector researchers that developed, he said.

In tests, the solar-based system demonstrated both a large detection area and significant bandwidth for a commercial silicon solar panel-based optical communication system, researchers reported. “This type of system could even allow data exchange and power generation with one device,” Xu said.

To prove their system--which uses a 3x3 solar array to create a detection area of 3.4 × 3.4 centimeters—the team tested it in a 7-meter-long water tank that emulated an underwater channel.

Researchers used mirrors to extend the path length of the optical signal, creating a transmission distance of 35 meters. In the tests, the system showed reliable stability, low power consumption, and high performance, they said.

Detection bandwidth was also higher—and thus enabled a higher data rate—than in previous attempts to use commercial silicon solar cells with a large detection area as detectors, the team reported in a paper on their work in the journal Optics Letters. As they increased the size of the solar array from 1×1 to 3×3, the −20-dB bandwidth increased from 4.4 megahertz (MHz) to 24.2 MHz.

“Because solar cells are mass-produced, the proposed scheme is quite cost-effective,” he said in a press statement.

The team plans to study the system’s performance with weak optical signals to optimize the system further for real-world applications in underwater communication. This will demonstrate how well it works in muddy or moving water, researchers said.

Researchers also aim to make the system more practical by fine-tuning key parameters, such as the number of solar cells in the array and the required reverse bias voltage, they said.