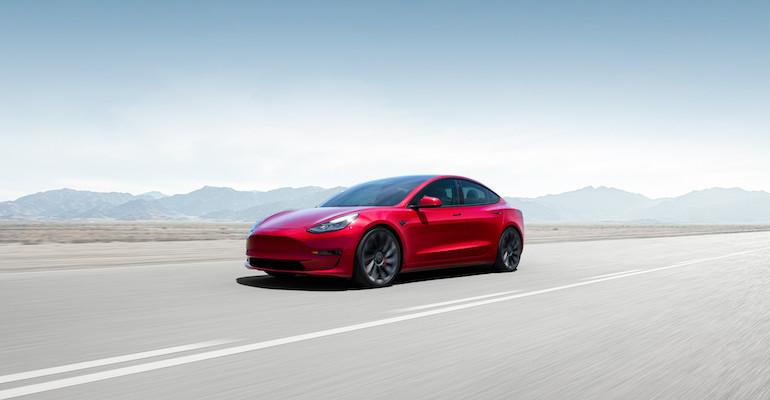 Tesla Model 3
Tesla sold nearly twice as many EVs in 2021 as it did in 2020—With new plants in Texas and Germany, the carmaker should hit more than 1.5 million EVs this year.

Five years ago, in 2016, when Tesla delivered 76,295 vehicles worldwide there were still plenty of skeptics that the electric vehicle (EV) company would survive let alone continue to thrive. In 2021, Tesla became the world’s most valuable car company, worth more than a trillion dollars and at the same time delivering 936,172 vehicles produced in plants in California and China. In 2022, the company’s newest factories in Texas and just outside Berlin will add to that total, producing as many as 1.5 million all-electric vehicles for the worldwide market.

If we ignore the United States for a moment, worldwide EVs have shown dramatic growth during 2021. According to Clean Technica, plugin vehicle registrations globally were up 72 percent in November 2021 compared to November 2020, with fully battery electric vehicles (BEVs) representing 72 percent of plugin registrations in November, compared with 69 percent for 2021 year to date. In November plug-in vehicles had an 11.3 percent share with BEVs having an 8.3 percent share of the overall auto market. When the numbers come in it is expected that the plug-in vehicle market will exceed 6.5 million vehicle sales globally.

Related: How Much Are the 14 EV Makers That Come After Tesla Worth?

How About the US?

Related: Hertz Will Buy 100,000 Tesla EVs in the Next Year: Biggest EV Purchase in History

Tesla vehicles accounted for 79 percent of all EVs sold in the US in 2020. This has dropped to about 56 percent for 2021 as new EVs like the Ford Mustang Mach-E and Volkswagen ID.4 arrived. 2022 will see a much broader range of EV types—from pickup trucks to crossover utility vehicles—hit the US market to better meet the mix of vehicles that consumers believe that they want.

The US market share of battery electric vehicles is still only between 2 and 3 percent of the total—Tesla has been the dominant player in a very small overall portion of the market. Depending upon whose industry forecast you choose to believe that EV number will be between 20 and 40 percent by 2030—the question is will Tesla and other startup EV companies like Rivian, Lucid, Canoo, and Fisker, along with a group of Chinese players like BYD, Nio, and Geely be able to outpace the established giants like Ford, General Motors, Stellantis, BMW, Toyota, and Daimler once these legacy manufacturers get serious about building EVs? One thing is certain: It’s going to be a bumpy ride.