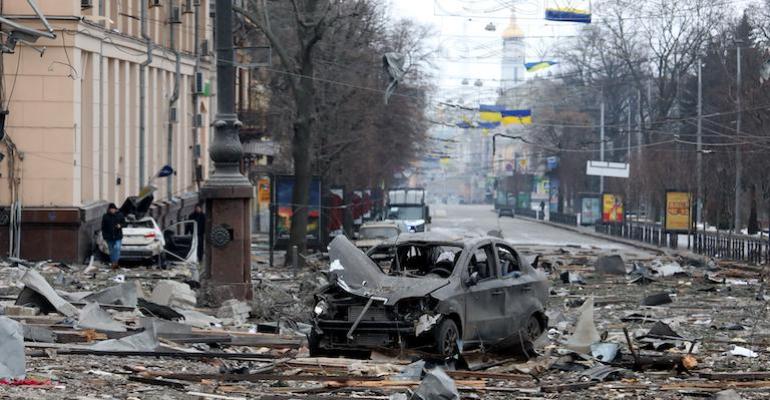 Start Slideshow ›
Kharkiv, Ukraine
Could stealing vast amounts of the natural resources needed for future electric vehicles (EVs) be a reason to go to war—and will China be the winner?

Historically, the reason for war or conquest has been the lure of a neighboring county’s natural resources. The Ukraine shield, which is part of the East-European platform, is an unusual geological structure. The 3.7 billion-year-old formation is characterized by a wide variety of geological and ore-bearing features.

These include some of the world’s richest iron and manganese ore deposits, as well as proven economically feasible deposits of lithium, aluminum, uranium, copper, graphite, and rare earth elements. In fact, Ukraine has the potential to supply almost all of the raw materials that are needed to build the lithium-ion batteries that are the key to an electrified future. Add in gold, nickel, and cobalt and the country of Ukraine appears to be a metallurgical treasure-chest—and potentially one of the richest countries in the world if its resources are exploited to help usher in a zero-emission future.

If that were not enough, Ukraine also has significant fossil fuel reserves, including a vast amount of natural gas that in Europe is second only to Norway’s reserves.

Europeans bought 2.3 million battery EVs in 2021, second only to China at 3.3 million—European EV market share is expected to reach 60%, or 8.4 million electric vehicles by 2030. At present China is the major supplier of critical advanced battery materials to both Europe and just about every place else in the world.

Europe is currently heavily dependent on imports of key raw materials, with China providing 98% of the EU’s supply of rare earth elements, a key component for magnets used in electric car batteries, smartphones, and wind turbines. The European Union (EU) understands the need to find more local resources that are less dependent on China if its EV goals are to be met. Last year the EU updated its list of 30 critical raw materials it will need in the future—21 of those 30 materials, including lithium, cobalt, manganese, and rare earth elements are found in Ukraine.

China, by design or coincidence, stands to gain the most from Russia’s aggression. With Russia teetering on the brink of energy sanctions, China can potentially gain a reliable source of much-needed fossil fuels from its Russian neighbor. With Ukraine decimated and under Russian influence, the production of battery raw materials that Europe needs for electrification has been suppressed and the Western world will need to continue to rely on China for decades to come. Meanwhile, the wholesale destruction of Ukraine’s cities and infrastructure will also need eventual rebuilding—construction contracts that are likely to go to Chinese companies in preference to companies in countries that have been a part of the sanctions against Russia.

If Ukraine’s neighbor Russia is playing a long game, one reason for its egregious invasion and war may be pure greed. Here are nine natural resources that will be critical to an electrified and energy future and that Ukraine has in economically recoverable quantities.

Battery Storage Will Help China Reach Carbon Neutrality By 2060: Can Others Keep Up?
Aug 10, 2021