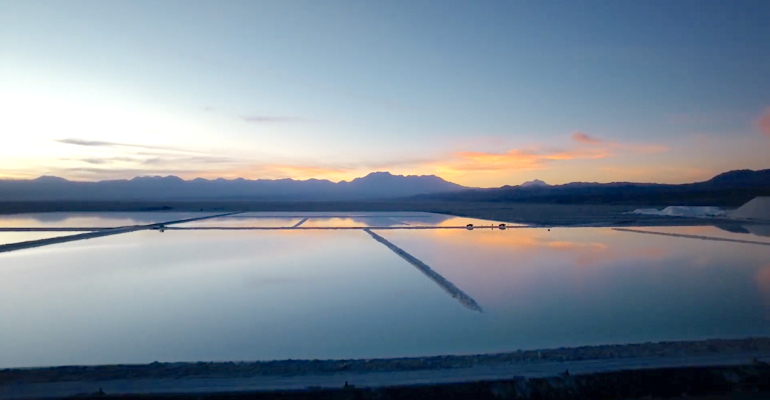 Albemarle’s Silver Peak brine lithium mine uses vast evaporation ponds that eventually convert lithium-rich brines into materials that can be used in lithium-ion batteries.
Albemarle will increase its lithium production in Silver Peak, Nevada to supply the US EV battery market.

With the future of electrical vehicles (EV) fully dependent upon sources of lithium raw materials with which to make lithium-ion batteries, it is perhaps surprising that there is only one active lithium mine in the United States. Albemarle Corporation, headquartered in Kings Mountain, North Carolina, and the world’s largest lithium producer operates its Silver Peak brine lithium mine in Nevada. Silver Peak started lithium production in 1967 and was purchased by Albemarle in 2014.

Where Lithium is Found

Silver Peak isn’t the only place lithium can be found in the US. In fact, Kings Mountain in NC, where Albemarle also has its research and development facilities sits on one of the richest spodumene ore deposits in the world. Spodumene is a hard rock mineral that is rich in lithium. Clay deposits in Nevada and geothermal brines in Arkansas are also potential future sources of the battery raw material that are under development.

The predominant sources of lithium worldwide are brine facilities in South America and spodumene hard rock mines in Australia. The vast majority of lithium is converted into battery materials in China.

In mid-2020, Albemarle idled production at its Kings Mountain lithium hydroxide plant in response to low worldwide demand due to softness in the EV market caused by the worldwide COVID-19 pandemic.

Silver Peak produces lithium carbonate from brines extracted from the Clayton Valley basin. The brines are pumped from below the surface and spread into large evaporation ponds, where, over many months, the water evaporates, leaving behind lithium enriched salts that are then purified to produce lithium carbonate. The company is looking for ways to optimize the lithium extraction from brine resources. The US Department of Energy is sponsoring a research project with Argonne National Laboratory, and Albemarle to investigate processes that improve the production of lithium.

Early in 2021, Albemarle announced that it will expand its lithium production at Silver Peak. The company plans to invest $30 million to $50 million, doubling the current production at the Nevada site by 2025, and making full use of its brine water rights. Albemarle also plans to begin exploration of nearby clay deposits and develop technology that could result in lithium production from clay resources in the region.

As US automakers are becoming serious about EV production and sales, there is a strong need for local domestic sources for battery raw materials like lithium. "As a leader in the lithium industry, our priority is to optimize our world-class resources and production. This includes Silver Peak, a site uniquely positioned as the only lithium-producing resource in the United States," said Eric Norris, Albemarle president, Lithium in a news release. "This investment in domestic capacity shows that we are committed to looking at the many ways in which Silver Peak can provide domestic support for the growing EV market," he added.

Meanwhile, Tesla announced that they had secured mining rights to 10,000 acres in Nevada to explore lithium production from clays. The company had originally begun working with Cypress Development Corporation to extract lithium from Nevada clays, but Tesla recently decided to develop its own technologies for such extraction. Tesla already operates its battery Gigafactory in Nevada and securing a local source for lithium could provide huge advantages. Tesla’s goal to offer an EV on the US market for less than $25,000 depends heavily on the ability to find low cost local domestic sources for battery raw materials.