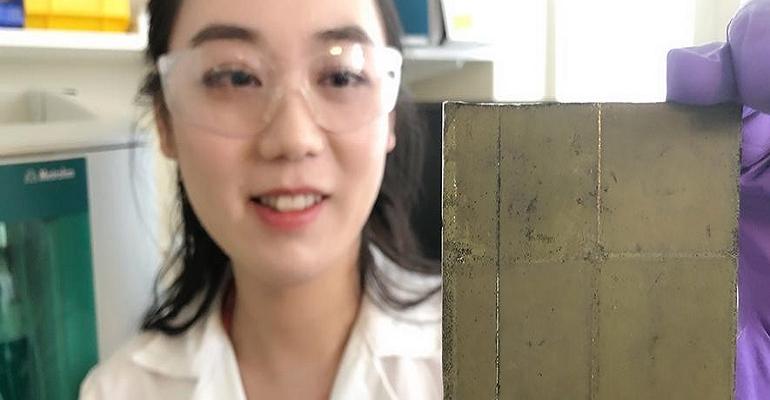 Solar energy is renewable, but still not optimal for the environment due to the materials used in the production of solar panels. However, researchers now have developed a device that could make solar fuel production more sustainable.

The device—based on an advanced ‘photosheet’ technology—can convert sunlight, carbon dioxide, and water into oxygen and formic acid. The latter two form a storable fuel that can be either be used directly or be converted into hydrogen.

“We hope this technology will pave the way toward sustainable and practical solar fuel production,” Erwin Reiser, a professor at Cambridge who led the research team there, said in a press statement.

Artificial photosynthesis mimics the ability of plants to convert sunlight into energy. The version of this process that the device practices represents a new method for converting carbon dioxide into clean fuels.

Researchers have achieved artificial photosynthesis to varying degrees, but often it’s been difficult to achieve this process “with a high degree of selectivity,” said Qian Wang from Cambridge’s Department of Chemistry, one of the researchers on the team.

Instead of converting as much of the sunlight as possible into the desired fuel, often researchers are “left with a lot of waste,” she said.

The new technology—which builds on research from the same team in 2019 to create an “artificial leaf”—produced almost no byproducts, which was a surprise to the team, Wang said.

“Sometimes things don’t work as well as you expected, but this was a rare case where it actually worked better,” she said in a press statement.

Building on the Past

The sheets, in turn, are comprised of semiconductor powders, which researchers said can be prepared in large quantities. Moreover, the fuel that the device produces is relatively easy to store and shows potential for producing fuel products at scale, researchers said. While the prototype unit is just 20 square centimeters in size, it can likely scale up to several square meters.

Another potential benefit of the device is that the formic acid it produces can be saved in solution and then be converted later into different types of fuel. The team published a paper on their results in the journal Nature Energy.

Researchers envision the device can be used on energy farms that are similar to solar farms to produce clean fuel using sunlight and water. However, the team still must improve efficiencies in the process before it can even be considered for commercial deployment.

The team is currently working on this aspect to optimize the system, as well as exploring other catalysts they can use with the device to produce different solar fuels, Reisner said.