Fifty Years Later: The Improbable Birth of the Lithium-Ion Battery 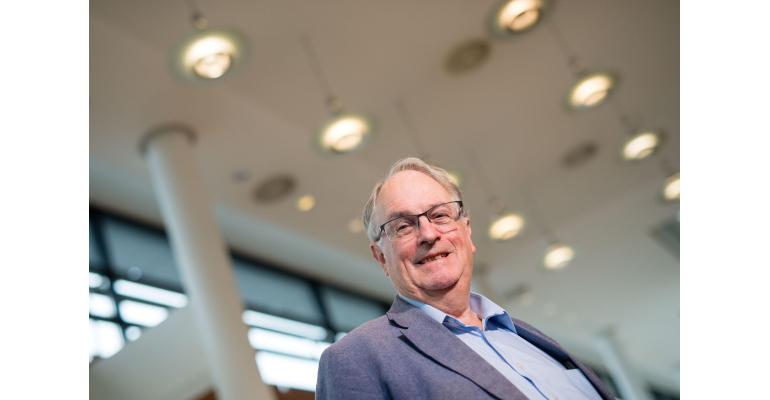 Stanley Whittingham invented the lithium titanium disulfide battery while working at Exxon Corporation in 1972. In 2019, Whittingham was co-winner of the Nobel Prize in Chemistry.
Lithium-ion is now a household name. But it wouldn’t be without some fortunate twists of fate and a lot of perseverance.

It took just three months in the fall of 1972 for Stanley Whittingham to conjure up the concept for the battery that changed the world. Whittingham, a 31-year-old Oxford-educated chemist, thought he saw a technical revolution on the horizon.

Fifty years later, the tale of his battery’s birth sounds improbable. Whittingham was young, fresh off a postdoc program at Stanford University, and working for the Exxon Corp. in New Jersey. Ironically, his battery concept would not benefit Exxon. Its early applications would include camcorders, laptop computers, and cell phones, none of which had any remote linkage to Exxon. Later, his concept would end up powering electric cars around the world, serving as a direct competitor to Exxon’s oil. In retrospect, it seems impossible that Exxon could have supported such research. But it did.

Whittingham’s work at Exxon moved rapidly. He joined the company in September of 1972, and within a few weeks began working on a concept he had studied at Stanford. The concept involved inserting ions into the atomic lattice of certain metals, and then extracting those ions. It was called intercalation (pronounced “in-TURK-a-lay-shun”). “I said, ‘Hey, we can store energy here,” he recalled in the book, Long Hard Road: The Lithium-Ion Battery and the Electric Car. “And that’s when we got into electrochemical studies, and then batteries.”

He decided to build a battery using intercalation materials at both electrodes. First, he considered a variety of layered compounds and chose titanium for the battery’s cathode. Then came the decision that changed the history of science. For an anode, he initially examined potassium, but decided it was too hazardous. He soon settled on a soft, silvery, lightweight metal…lithium. Ultimately, he would use lithium in the battery’s anode, then in its electrolyte. The results were astonishing. Whereas the best batteries of the day operated at 1.3 volts, this new battery offered 2.4 volts. And, thanks to the science of intercalation, it was rechargeable. Working versions of Whittingham’s lithium titanium disulfide battery were finished by December 1972.

A month later, Whittingham was summoned by Exxon corporate managers to their New York City offices. “I was asked to talk to a subcommittee of the Exxon board and explain what I was doing,” Whittingham recalled. “Someone in research had told them what was going on,” he said in Long Hard Road. “ So I went in there and explained it—five minutes, ten at the most. And within a week they decided, yes, they wanted to invest in this.”

That Exxon should have invested in a technology that would compete with oil now seems incredible. But the world was different in 1972. Scientific consensus at the time held that the Earth would run out of oil in 50 years. By 2000, scientists said, oil availability would be on a serious slide. Moreover, the culture of corporate research was different in 1972. Big companies, Exxon being a case in point, deeply believed in the concept of fundamental research—science for the sake of science. Scientific papers and patents were the goal. If a breakthrough were to be made, it was assumed the company would figure out how to benefit from it.

Such was the case for Whittingham. He was encouraged to move ahead. He did so, and Exxon filed for a patent in Belgium in 1973. When an oil crisis struck in the United States in 1973, Exxon’s sense of urgency grew. By 1975, its attorneys were filing for a flurry of U.S. patents on Whittingham’s battery.

To be sure, Whittingham’s battery was not called lithium-ion, nor did it use the same chemistry as today’s products. But it operated off the same fundamental mechanism—lithium ions inserted into a host electrode. A tiny button cell version of the battery was fabricated and employed in a “perpetual solar wristwatch” sold by a Swiss company, Ebauches SA. There, it served perfectly. What’s more, it was almost impossible to look at this new battery and not think about a potential future in an electric car.

Still, Exxon slowly lost interest in the lithium titanium disulfide battery. The oil crisis faded, the wristwatch application was deemed insignificant, and corporate priorities changed. Ultimately, the company’s managers decided to sell off the technology. The battery was licensed to three companies—one in Asia, one in Europe, and one in the U.S. “There wasn’t a lot of discussion,” Whittingham said years later. “One day they just said, ‘We’re going to stop doing this.’”

Saved by the Camcorder

But the rechargeable lithium battery was not dead. In 1980, John Goodenough, a 58-year-old American working at the University of Oxford in England, improved on Whittingham’s battery with a new cathode. Goodenough’s cathode was called lithium cobalt oxide, and it offered an amazing four volts. Now the battery was even better—more energetic and yet still rechargeable. There was nothing like it on the commercial market. 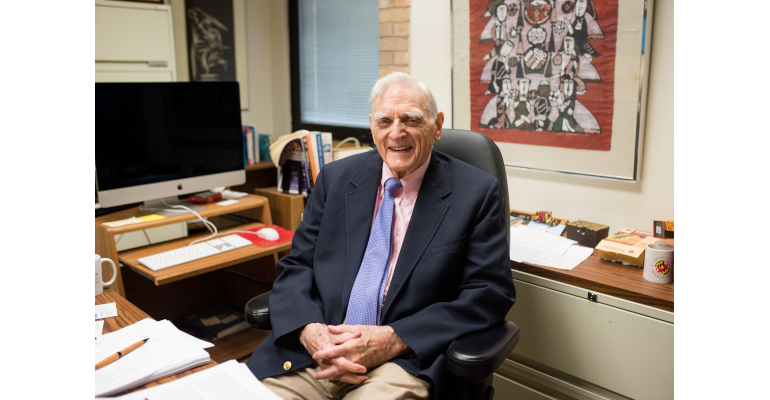 John Goodenough was co-winner of the Nobel Prize in Chemistry in 2019 for his development of the lithium cobalt oxide battery. At 97, Goodenough was the oldest Nobel laureate ever. He is currently working as a professor of mechanical, materials science and electrical engineering at the University of Texas.

But when Goodenough contacted battery manufacturers in the U.K., U.S., and mainland Europe, he found no interested parties. The world, it seemed, did not want the rechargeable lithium battery. Even his employer, Oxford University, declined to pay for a patent. To get patent protection, Goodenough had to travel to a government lab in nearby Harwell, England, and sign away his rights to the invention. The Harwell lab patented the technology. Then the patent laid idle.

Years later, however, the Harwell lab received an unexpected call from Sony Corp. in Japan, wanting to discuss a licensing arrangement on a patent that had been collecting dust for eight years. The call surprised everyone at the lab. At first, the lab’s scientists couldn’t imagine which patent had spurred the interest. Soon they realized that Sony was citing an old patent titled, “Electrochemical Cell with Fast Ion Conductors.” It was John Goodenough’s patent.

Sony engineers wanted the patent because they planned to build batteries for their new camcorder, called the Handycam. Using the rechargeable lithium cell, they reasoned, the Handycam could offer lighter weight and a longer run time. Their plan was to use Goodenough’s cobalt oxide cathode and couple it with a petroleum coke anode developed by Asahi Chemical in Japan.

At long last, the rechargeable lithium battery was on its way. Sony dubbed it the lithium-ion battery, featured it in the Handycam, and offered it to the market starting in 1991. Soon, the battery was serving in laptop computers and cell phones. In 1998, Nissan Motor Co. put lithium-ion in a limited-edition electric car called the Altra, and began laying bigger plans. Other automakers followed, and the lithium-ion battery became a $30 billion-a-year, growing business.

Neither Whittingham nor Goodenough made money off their inventions. Goodenough signed away the rights to his lithium cobalt oxide chemistry in 1980, making it impossible for him to personally profit. Whittingham’s lithium titanium disulfide was used only in the Ebauches wristwatch, and never for any other applications.

In 2019, both scientists were co-winners of the Nobel Prize in Chemistry, along with Akira Yoshino, who co-developed the petroleum coke anode for Asahi Chemical in Japan. By that time, 47 years had passed since Whittingham’s invention and 39 had passed since Goodenough’s development. 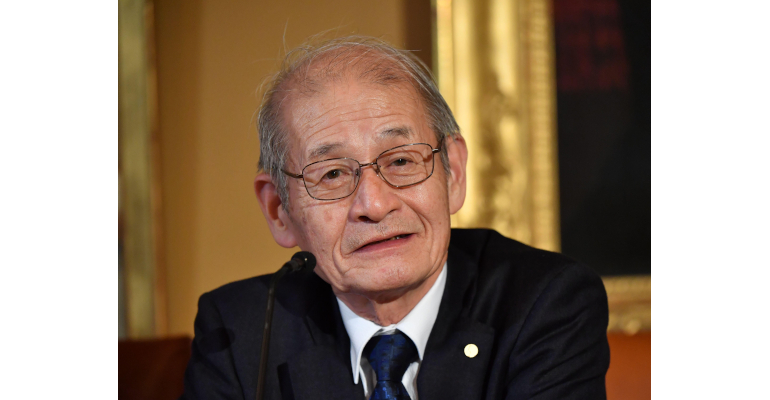 Akira Yoshino, who developed the petroleum coke anode for the lithium-ion battery, was co-winner of the 2019 Nobel Prize in Chemistry.

On his desk, Whittingham has a solar clock powered by a lithium titanium disulfide battery. He built the clock in 1977. It still operates today. His clock is the only remaining application to use that particular chemistry.

Today, he says he understands why his chemistry didn’t make a big commercial splash back in the 1970s. “The market (for batteries) just wasn’t going to be big enough,” he said in Long Hard Road. “Our invention was just too early.”