NanoGraf Has the World’s Most Energy-Dense Li-ion Battery 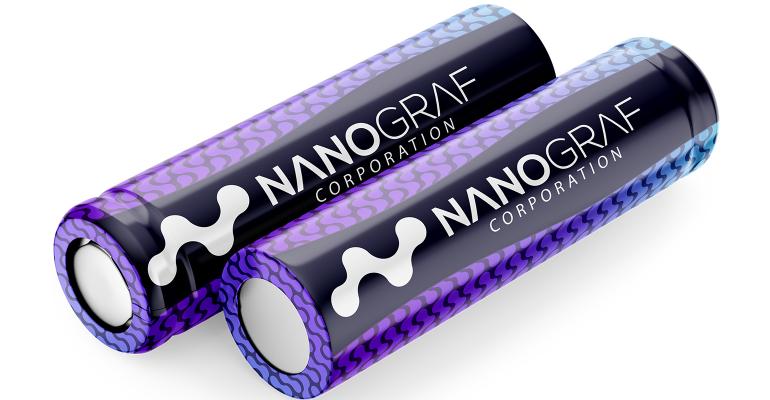 Rendering of NanoGraf cylindrical batteries with silicon anodes enabling record-breaking energy density.
NanoGraf CEO Francis Wang explains the silicon-anode advantages that made it possible and its implications for the US military and others.

When evaluating a battery, one of the most important specifications is the battery’s energy density—how much power it can hold. A new benchmark has been reached by battery developer NanoGraf, which recently announced the development of the world’s most energy-dense lithium-ion battery. Based on silicon anode technology, the new battery comes in an 18650 battery form factor while achieving an 810 Wh/L (4.0 Ah capacity).

Let’s define the terms: Energy density is the amount of energy that a battery can store per volume (Watt-hours per litre or Wh/l) or per mass (usually in Watt-hours per gram or Wh/g). A related term is specific capacity—the amount of electric charge (milliampere hours or mAh) the material can deliver per gram (g) of material.

Energy density is directly related to the overall capacity and, ultimately, battery life.

NanoGraf’s breakthrough is adding momentum to the silicon anode movement.

Battery Technology had the chance to discuss the breakthrough Dr. Francis Wang, CEO of NanoGraf and hear about the news firsthand:

What are the benefits of silicon anode as compared to traditional lithium-ion batteries?

Dr. Francis Wang: Silicon-containing lithium-ion batteries (LIBs) have much higher energy densities than traditional LIBs, meaning they are able to deliver a higher energy output on a per gram and per volume basis than traditional LIBs. Silicon can store up to ten times the amount of lithium than graphite and can dramatically increase a LIB’s overall capacity when incorporated into the anode.

What are the implications of this new milestone from NanoGraf?

What challenges needed to be overcome to reach this energy milestone?

Wang: Incorporating more silicon into the anode without sacrificing battery cycle life. The main disadvantage of using silicon in LIBs is that it swells significantly in volume, resulting in poor mechanical stability and battery cycle life. This has limited the amount of silicon that can be incorporated into a LIB to 5–10%. What sets NanoGraf apart from the competition is that we are able to incorporate more than 20% silicon into the anode and deliver world-class energy density and performance.

What technological innovations were necessary to achieve this energy milestone?

Wang: NanoGraf's proprietary coating technology stabilizes the silicon anode by dramatically minimizing electrode swelling and improving mechanical stability. This allowed us to incorporate the required amount of silicon into the anode to achieve the ambitious 4.0 Ah target.

What are the applications for the improved battery?

Wang: The target applications for the 4.0Ah cell are military hand-held radios and standard military battery packs such as the Small Tactical Universal Battery (STUB) and the BB-2590. Additionally, we see opportunities for the cell to be used in premium consumer products and hand-held medical devices that are looking to increase runtime before the charge.