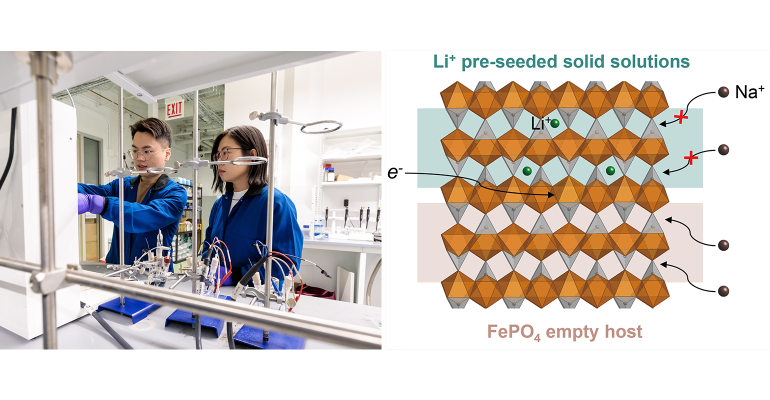 Left: University of Chicago Assistant Professor Chong Liu (at right) and her team reengineer materials on the molecular level. Right: Schematic showing that the creation of Li solid solution phases in the olivine iron phosphate via seeding can raise the Na intercalation barrier and promote Li selectivity.
Researchers have found a way to maximize an extraction process that can promote the reuse of the material for battery design.

One of the reasons scientists are looking for alternatives to lithium in battery technology is the complexity of sourcing the material, which is only available outside the United States and often in resource-rich but under-developed regions.

Now researchers have come up with a new solution to improve the extraction of lithium more locally by a technique that can take its ions from two unconventional water sources-- petroleum wastewater and geothermal brines, they said.

A team from the University of Chicago’s Pritzker School of Molecular Engineering developed a form of electrochemical intercalation--a process in which electrodes draw lithium from otherwise unusable water—that potentially can exfiltrate enough lithium ions from these water sources for reuse, researchers said.

Until recently, this type of extraction did not yield enough lithium from water resources that are extremely diluted, they said. But the University of Chicago team, led by assistant professor Chong Liu, developed a method to “seed” electrodes with lithium ions, which helps increase the host’s lithium selectivity and repel unwanted elements when performing the extraction, Liu said.

“In lithium extraction, you have competing intercalations between lithium and sodium that severely limits our ability to draw out lithium effectively,” she acknowledged. “We wanted to understand what was happening on the molecular level and how we could control that selectivity.”

Intercalation is a chemical process by which a “host” material draws in and stores “guest” ions, acting somewhat like a molecular beehive, researchers said. The process also can be reversed, so the same ions can be extracted from the host. Indeed, the repeatable process is the key mechanism behind rechargeable batteries and how they release and recharge over many cycles.

For their particular type of lithium extraction, researchers used olivine iron phosphate--a type of crystal that is well-suited to attract and store lithium ions—as their host material. However, though it is one of the most widely studied and found to be one of the best for this purpose, it has limitations, they said.

What happens with olivine iron phosphate is that competing ions—such as sodium--are often drawn into the host material along with lithium, which harms the effectiveness of the process, researchers said. Liu and her team set out to understand these co-intercalations and what happens to the two materials once they are stored in the crystal.

Collaborating with other scientists at the University of Illinois Urbana-Champaign, the team used transmission electron microscopy to peer inside their host material. What they found was that lithium and sodium tend to separate when given the chance, suggesting that they repel each other inside the crystal material in a similar way to the separation of oil and water when they mix. This is a process called phase separation.

The team confirmed this behavior with computational models developed in collaboration with researchers at the Illinois Institute of Technology, Liu said.

“It was remarkable to see these ions phase separate into two different domains where one domain was only lithium and one was only sodium,” she said. “It made us wonder how we could use it to boost lithium selectivity.”

Once they had a handle on what was happening inside the material, researchers could come up with a solution. In this case, they invented a system to pre-seed their host material with lithium, believing that this would increase the energy barrier for the sodium ions and make it more difficult for them to enter the olivine iron phosphate.

Tests showed that they were right—seeding 20 percent to 40 percent of the overall host materials’ storage sites demonstrated an increase in selectivity of 1.6-fold and 3.8-fold, respectively. Moreover, the seeded high-lithium solid solution phases of the host material showed a strong correlation to the selectivity enhancement, researchers said.

“We’ve demonstrated an effective way of manipulating the kinetic pathway in a host material,” Liu said in a press statement. “If you can control the lithium-sodium pathway, you have a powerful lever for influencing lithium selectivity.”

There were other factors in the work that made the material more selective in taking ion out of the water sources, researchers said. They included both host morphology and defects, giving the team several avenues for further research into how to improve the process.

Indeed, based on their findings, future work will include a look into the ideal seeding conditions and host morphology to maximize lithium selectivity and create “a sustainable system for extracting lithium.”