How Many EV Chargers Does the US Need? 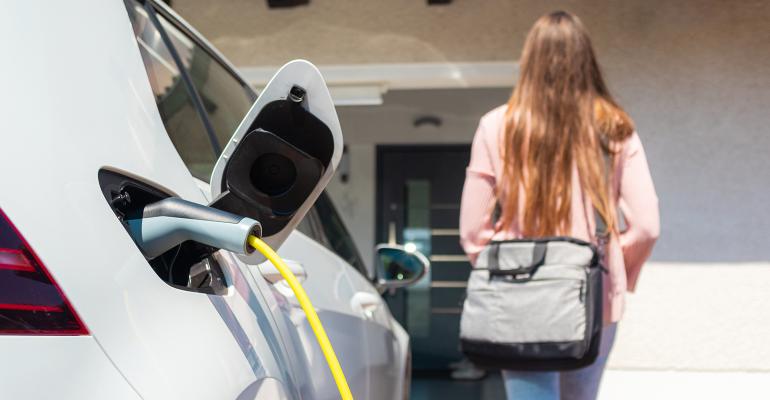 Supporters of vehicle electrification point to the more than 140,000 EV charging stations currently deployed across the United States – including Level 2 AC and Level 3 DC fast chargers and both public and restricted access units – as a sign that a budding system to support our transportation transformation is in place.

However, S&P Global Mobility data shows that the charging infrastructure is not nearly robust enough to fully support a maturing electric vehicle market.

Even when home-charging is taken into account, to properly match forecasted sales demand, the United States will need to see the number of EV chargers quadruple between 2022 and 2025, and grow more than eight-fold by 2030, according to S&P Global Mobility forecasts.

“The transition to a vehicle market dominated with electric vehicles (EVs) will take years to fully develop, but it has begun,” said S&P Global Mobility analyst Ian McIlravey. “With the transition comes a need to evolve the public vehicle charging network, and today's charging infrastructure is insufficient to support a drastic increase in the number of EVs in operation.” 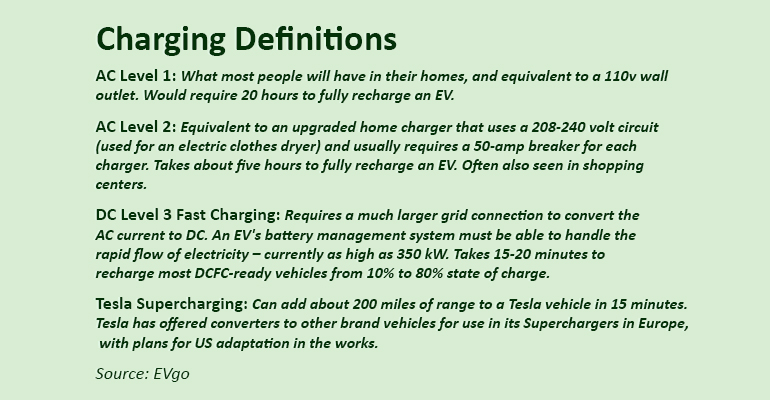 S&P Global Mobility estimates there are about 126,500 Level 2 and 20,431 Level 3 charging stations in the United States today, plus another 16,822 Tesla Superchargers and Tesla destination chargers. The number of chargers has grown more in 2022 than in the preceding three years combined, with about 54,000 Level 2 and 10,000 Level 3 chargers added during 2022.

S&P Global Mobility registration data shows that there are 1.9 million electric vehicles (EVs) in operation today, or 0.7% of the 281 million vehicles in operation, as of October 31, 2022. New light-vehicle registration share for EVs reached 5.2% over the first ten months of 2022. With the escalating number of EV nameplates forecast to launch within the decade, the market is poised for rapid growth. EV market share for new vehicles is likely to reach 40% by 2030, according to S&P Global Mobility forecasts, at which point the total number of EVs in operation could reach 28.3 million units. Hence the need for rapid development of a charging infrastructure.

While 2030 may seem years off and a problem for tomorrow, development of common standards and deployment of charging stations will take time. But even looking at 2025 – just three years away – there could be as many as 7.8 million electric vehicles in operation (VIO) in the United States, McIlravey said. 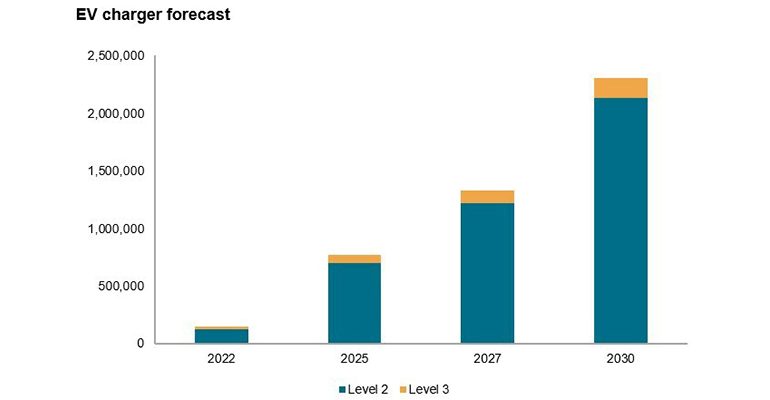 To support that vehicle population, we expect there will need to be about 700,000 Level 2 and 70,000 Level 3 chargers deployed, including both public and restricted-use facilities. By 2027, we expect there will be a need for about 1.2 million Level 2 chargers and 109,000 Level 3 chargers deployed nationally. Looking further to 2030, with the assumption of 28.3 million units EVs on US roads, an estimated total of 2.13 million Level 2 and 172,000 Level 3 public chargers will be required – all in addition to the units that consumers put in their own garages.

These national figures are illustrative of the direction needed, but we also expect demand across the United States to develop in a lopsided manner, especially in states where EV adoption is already comparatively strong. Currently, 35 states have signed on for federal assistance under the Bipartisan Infrastructure Law, of which $7.5 billion is earmarked for EV charging infrastructure. President Biden has pledged that the government will fund the installation of 500,000 charging stations – but that is just a starting point.

Noted McIlravey: “In states following the California Air Resources Board's path to zero-emissions vehicle (ZEV) sales, the faster growth of consumer demand will push private investment and more rapid charging infrastructure deployment. However, in states where EV adoption happens gradually, charging station deployment will not need to happen as rapidly and may also need a bit of a push.” 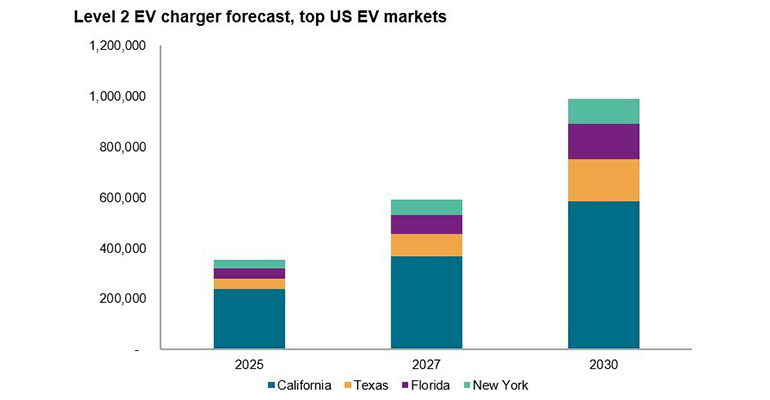 The four US states with the highest number of vehicles in operation and highest new-vehicle registrations traditionally are California, Florida, Texas and New York. California, which embraced EVs early, is the state pushing for the most significant emissions restrictions. As such, it is the largest EV market, with about 36.9% of total EVs in operation and 35.8% of total US light-vehicle EV registrations from January through September 2022.

However, neither Florida nor Texas have participated significantly in the emissions discussion nor followed California's lead like the “CARB states” mostly in the northeastern and northwestern United States. As a result, the size of these markets – rather than adoption rates – is the main reason Florida and Texas rank highly in EV share of new vehicle registrations and VIO.

These are also states which have weather largely favorable to EV operation. As EV adoption grows in the United States, the power of ZEV states remains important to EV growth, but there is little doubt we will see the necessary investment in these markets given the top-down (government) and bottom-up (consumers and charging network operators) support for development in order for the United States to achieve its target for EV adoption. But consumers in the large markets outside the ZEV states will need to be supported with sufficient public charging infrastructure.

Meanwhile, Florida currently has about 5,600 Level 2 non-Tesla chargers and 955 Level 3 chargers, but is expected to have 1.06 million EV VIO potential in 2027. To support these vehicles, S&P Global Mobility forecasts that Florida will need to grow its charging infrastructure to about 77,000 Level 2 and 6,800 Level 3 charging stations.

There also remains lower investment into charging systems outside of major metro markets. Though EV adoption in those areas will continue to be slower, creating a robust infrastructure is important there as well. Currently, 85% of Level 3 chargers are in US Metropolitan Statistical Areas (MSAs as defined by the US Census Bureau, and including 384 metro areas); 89% of Level 2 chargers are in these areas. For Tesla owners, 82% of its Superchargers and 83% of its destination chargers are in MSAs.

“The focus on urban areas follows where EVs are today, but distribution will need to be much wider as vehicles in operation grow, and consumers need to charge along their routes,” McIlravey said.

Some industry pundits look to the gasoline service station as a comparable model to electric vehicle recharging. But as at-home recharging is in most cases the easiest solution to integrate an EV into daily life, a robust charging infrastructure will look much different from the network of gas stations that has evolved to support the internal combustion engine.

The technology behind EV chargers, battery management systems, and battery technologies are leading to faster charge times for DC or Level 3 scenarios, which in turn can impact the locations of charging stations.

There also are evolving solutions capable of changing the model. Battery swapping, wireless charging, and increased deployment of DC wallbox solutions at home are three solutions which still can change the landscape. In China, the practice of battery swapping is growing and has had some success, though it has seen virtually no application in Europe beyond the first NIO stations in Norway, and not yet really tested (nor expected) in the US market.

“There's the propensity for home charging, the lack of governmental directive, and the need to homogenize battery packs – which would see OEMs and Tier 1 suppliers surrender some of their intellectual property – holding back a technology like battery swapping,” said Graham Evans, S&P Global Mobility research and analysis director.

The third technology with potential to shake up our existing assumptions are at-home DC wallbox solutions. According to Evans, they offer a halfway solution between slow AC chargers and the superfast public DC chargers. Wider deployment of these solutions has potential to shift the balance in the domestic versus public charging conundrum. Furthermore, there are models available that facilitate V2G (vehicle to grid) operation, which has potential to change the conversation by allowing EVs to effectively become part of our electric grid system and leading to some financial return for participating consumers.

As the US vehicle market transitions from internal combustion to battery electric, the refueling mechanism is transitioning with it.

“For mass-market acceptance of BEVs to take hold, the recharging infrastructure must do more than keep pace with EV sales,” Evans said. “It must surprise and delight vehicle owners who will be new to electrification, so that the process seems seamless and perhaps even more convenient than their experience with gasoline refueling, with minimal compromise on the vehicle ownership experience. Developments in battery technology, and how quickly EVs can receive power, will be as critical to improvements here as how quickly and plentifully infrastructure can provide the power.”