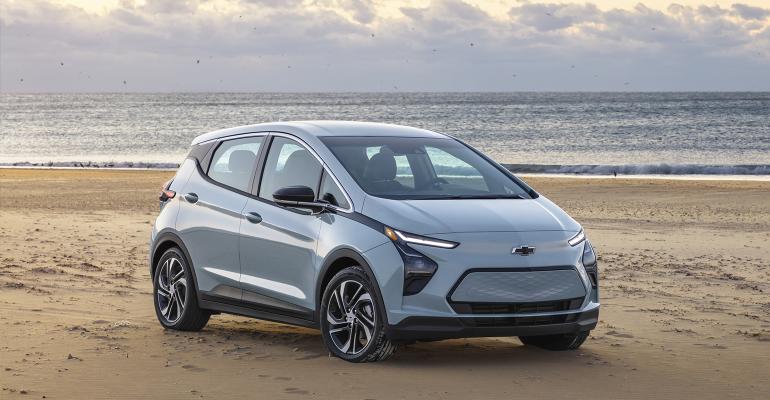 Start Slideshow ›
It might not be a surprise to read that electric vehicles outscore internal-combustion cars when ranked head to head for fuel efficiency—but let's look at which 2022 EV makes and models score the best in each size class.

It’s not breaking news that EVs are seen as greener and more fuel-efficient than their internal-combustion powered siblings—but the US Environmental Protection Agency (EPA) charts the details. Interestingly, the EPA maintains two versions of its list of most fuel-efficient cars by size class: One version excludes and the other includes EVs. The version that includes EVs is dominated by them—and the version that doesn’t include them features a good number of hybrid vehicles. We’ll look at which makes and models of 2022 EVs top each category.

First, though, a reminder of just how EPA calculates fuel efficiency for EVs—a vehicle for which “miles per gallon” (MPG) doesn’t really apply.

In the EPA EV tests, a fully charged all-electric vehicle is driven on a dynamometer over successive simulated city and highway routes until the battery is depleted. Once a vehicle battery is fully discharged, it is recharged using the manufacturer-supplied charger for that vehicle. The energy consumption is then calculated from the recharging energy, the energy-discharge data from the vehicle, and the distance traveled for each cycle. The recharge energy includes any charging losses due to inefficiencies in the manufacturer’s charger.

The EPA measures EV efficiency first in kilowatt-hours per hundred miles (kWh/100 miles). That gives a figure equivalent to what gallons per mile (not miles per gallon) would be with a gasoline-powered car. Then, trying to keep close to the terminology consumers are familiar with, the EPA uses that data to calculate MPGe—which stands for miles per gallon of gasoline-equivalent.

“Think of this as being similar to MPG, but instead of presenting miles per gallon of the vehicle’s fuel type, it represents the number of miles the vehicle can go using a quantity of fuel with the same energy content as a gallon of gasoline,” explains the EPA’s fueleconomy.gov web site. “This allows a reasonable comparison between vehicles using different fuels.”

Let’s look at the EV makes and models that ranked highest in each size class, starting with subcompacts: