Breaking Down the Breakthroughs in Battery Development 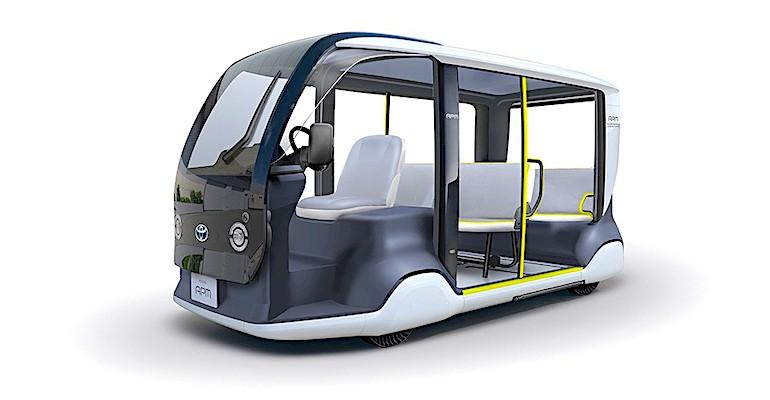 Toyota Motor Corporation (Toyota) partnered with the Olympic and Paralympic Games Tokyo 2020 and developed a special new EV, the "APM (Accessible People Mover)", a mobility vehicle designed to showcase its solid-state lithium batteries.
Opinion: How do we navigate the hype to find the truth about battery development?

Put two pieces of different types of metal in a medium that allows ionic exchange and you have a battery. Don’t believe it? Just do an Internet search for “Potato Battery.” The point is that dissimilar metals create an electric potential between them and that potential can be used to generate electrical current. From such a simple thing springs a whole world of misunderstanding, misdirection, hype, and, occasionally, outright lies.

A Miracle a Month

It seems almost every month an announcement comes about a new battery that is safer, cheaper, and will last millions of miles. A breakthrough. A game-changer. The Holy Grail. Is it real? Since the early 1990s, more than 300,000 battery patents have been filed, so it certainly seems people are trying. But it’s easy to make grand claims without providing any real evidence.

It’s About the Lithium

Lithium-ion batteries are today’s most important batteries for cell phones and handheld devices, laptops, and electric vehicles (EVs). Lithium is a highly reactive metal and is used in the form of ions that travel between a metal oxide cathode and a carbon graphite anode. Lithium metal, which potentially could have a much higher energy density, cannot be used with liquid electrolytes (more on that later) as spikey dendritic lithium crystals form on the metal surface during charging. These crystals can grow large enough to create a short circuit between the anode and cathode, potentially creating a fire hazard.

In a lithium-ion battery, a metal oxide cathode is used instead of lithium metal and it is the key to commercial lithium-ion battery performance. Just about every other element on the Periodic Table has been tried in combinations of metals and metal oxides for this application. Sodium, fluorine, magnesium, potassium, calcium, zinc, and aluminum have all had their turn. Currently, iron with phosphate (LFP), or nickel, with cobalt and either manganese (NCM) or aluminum (NCA), are the most commonly used cathode materials in commercial batteries for EVs.

Besides the various mixtures of either nickel or iron, other possibilities include lithium-air (using oxygen from the air—tiny hearing aid batteries are already made this way), and lithium-sulfur (an experimental version of which was used to set altitude and endurance records with an unmanned solar-powered aircraft called Zephyr in 2008).

Earlier this year, Tesla hinted that it will have a battery that will last more than a million miles, at a significant lower cost than the current battery technology that it shares with Panasonic. Commercial lithium-ion batteries are expected to last 100,000 to 200,000 miles. The new battery, a result of a collaboration with the Chinese battery giant Contemporary Amperex Technology (CATL), eliminates expensive cobalt from its chemistry, moving the purchase price of an EV closer to parity with its gasoline-engine counterpart.

In March, General Motors (GM) announced its Ultium advanced battery system. Created with its Korean battery maker LG Chem, the claim is also for a million-mile lifetime. A million miles seems a popular theme for battery and EV companies. The batteries will be produced at a new joint-venture battery plant at Lordstown, Ohio, and use a nickel, cobalt, manganese, aluminum chemistry—the aluminum addition allows a reduction in the amount of cobalt, reducing costs.

IBM Research’s Battery Lab, at the end of 2019 announced a new battery design that uses “a cobalt and nickel-free cathode material, as well as a safe liquid electrolyte with a high flash point.” IBM claims, “The unique combination of the cathode and electrolyte demonstrated an ability to suppress lithium metal dendrites during charging, thereby reducing flammability.” The company also claimed it takes less than five minutes to reach an 80 percent state of charge for its wonderous new battery. No mention of a million miles. The company says the battery will be made from materials derived from seawater and that it is made up of “three new and different proprietary materials, which have never before been recorded as being combined in a battery.”

Is the IBM battery a breakthrough? How would we know? The company media release is long on hype and promise but provides little or no substantive information about the chemistry of the configuration of the battery. Shouldn’t we expect more from “Big Blue”?

Another way to increase lithium-ion battery performance and safety is through the use of a solid electrolyte. Present-day lithium-ion batteries use an organic liquid electrolyte (see above) that provides mobility of lithium ions between the anode (negative) and cathode (positive) electrodes. That organic solvent is flammable, however, and thus can be a fire hazard should the battery cell become damaged or if it overheats or is overcharged.

A ceramic or polymer solid electrolyte can be substituted for the organic solvent, which would help make the battery safer. According to an Oak Ridge National Laboratory study, “The key to improving density lies in developing a powerful thin solid electrolyte.” Also, when lithium metal foil is used to replace the current graphite anode, the combination could increase battery performance and storage capacity by 2-3 times.

Toyota has announced that it will have solid-state electrolyte batteries on the market in it’s EVs by 2025. The company had intended to showcase its new lithium-sulfur solid electrolyte technology at the 2020 Tokyo Olympics, an event that has been postponed to 2021. The claim is that the new batteries can recharge fully in less than 15 minutes and will last more than 30 years.

Toyota has technology-sharing agreements with Suzuki, Subaru, and Mazda and a joint-development pact with Nissan, Honda, and the Japanese government. Ford, BMW, Daimler, Volkswagen, Renault, Nissan, Mitsubishi, and Hyundai, as well as several Chinese EV companies, are also investing hundreds of millions of dollars in solid-state battery research and development. Finding that much money means someone has to promise a big return, even if the research doesn’t always support the conclusions. 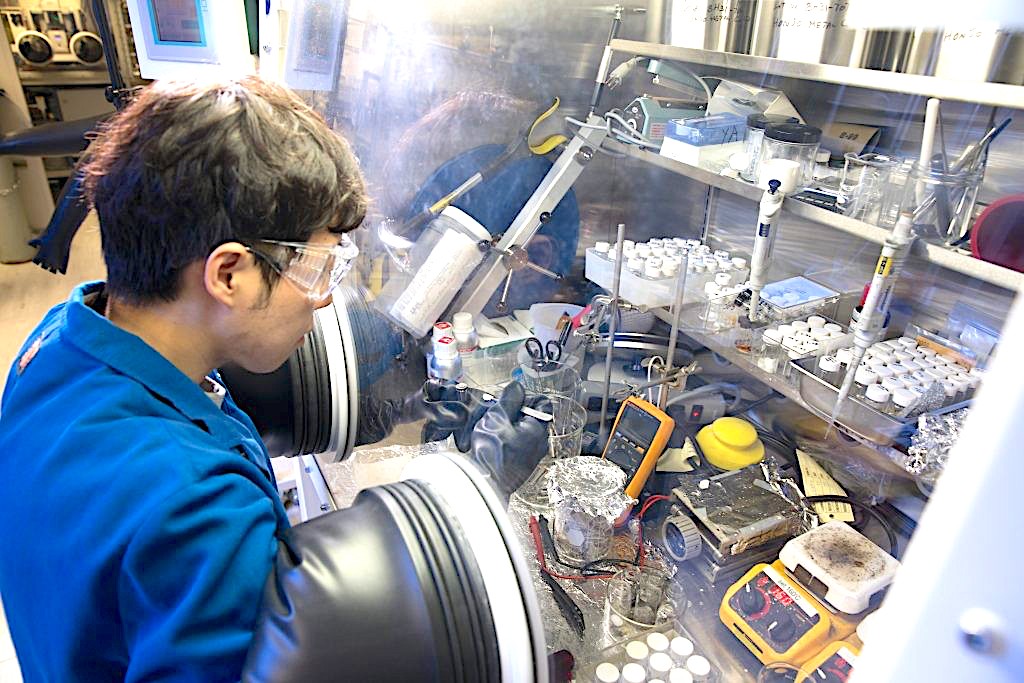 A technician evaluates the electrochemical performance of the coin cells fabricated in-house in the IBM battery lab. Coin cells are often used for initial battery studies but their results do not always scale well to full-size battery cells.

What A Battery Must Do

The reality is that batteries must meet requirements which include power and energy density, capacity, cycle lifetime, cost, charging time, reliability, and safety. If they are to be used in an EV or a laptop, they must also be relatively light in weight—obviously not a concern for stationary power batteries. Doing so has never been easy and finding just the right combination of chemistry and configuration to meet these requirements doesn’t come cheaply.

It turns out that’s something else a battery has to do—bring in money. Lots of money. All of the misdirection, over-inflated claims, wild promises, and outright lies provide “proof” that your company, university, or research organization is on the cutting edge of battery understanding and deserving of more publicity, more funding, or a higher stock price. Because the claims are all but impossible to check or verify, and the promises sound like something we want and need (lower cost, safer, longer range, “million-mile” lifetime), it is easy to make a claim and wave your hands about the details. Easy, perhaps, but it doesn’t make it right.

Will Toyota’s batteries last 30 years? Will IBM’s really charge in just five minutes? Will Tesla’s and GM’s batteries really last a million miles? We have no way of knowing, but it sounds great, especially to a public that is just beginning to learn about EVs.

It’s time to stop this foolishness. There are some interesting and potentially useful innovations in battery research—but finding them among the hype and hyperbole feels all but impossible. Universities public relations departments need to stop overstating the miracles their research will enable. Car companies need to stop making claims that are beyond rational belief. Battery companies and startups need to be realistic in what is possible. Only then can the true potential for EVs and the new technology batteries that power them be evaluated.