Can Ice Structure Anodes for Sodium and Potassium Batteries? 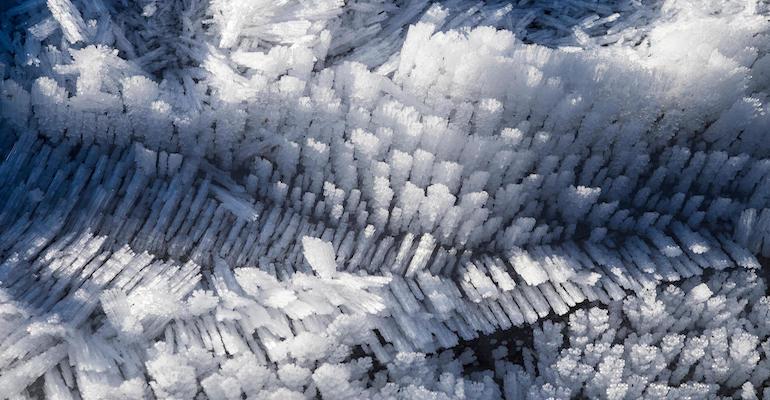 As an alternative to lithium, sodium or potassium can be used as battery materials—if the right kind of anode can be created.

Lithium-ion batteries have become the dominant design for electrical energy storage for electric vehicles (EVs) and portable electronics. This hasn’t stopped the search for cheaper, more environmentally friendly battery configurations that use more earth-abundant materials. Researchers at Bristol University have developed high-performance sodium and potassium ion batteries using cellulose nanocrystals (a nano-sized form of cellulose) that are formed into a porous structure using ice crystals that are grown and then sublimated. The process is called ice-templating and it leaves large channels within the structure that can carry the large sodium and potassium ions.

Alternatives to lithium-ion batteries (LIBs) such as sodium-ion batteries (SIBs) and potassium-ion batteries (PIBs) are appealing owing to the abundance of both sodium (Na) and potassium (K) within the Earth’s crust and similar electrochemical behavior to lithium.  Due to the larger ionic radius of K+ (1.38 Å) compared to Li+ (0.76 Å) however, the insertion of K+ ions into graphite layers of a normal anode (called intercalation), with a 3.35 Å graphite interlayer spacing), causes substantial volume change and relatively slow motion of the ions into and out of the anode material. This causes structural degradation over a small number of charge and discharge cycles and poor capacity. The challenge in the development of SIBs/PIBs has been to find suitable anode materials which can quickly accommodate Na+/K+ during the charge-discharge process while remaining stable enough to attain a high number of cycles without degradation of the battery performance.

Related: Could a Novel Graphene Anode be the Key to Future Sodium-Ion Batteries?

Ice-templating can be used to create a carbon-based anode structure with sufficiently large channels to allow the easy motion of K+ and Na+ ions within the anode. The technique comprises the freezing of a suspension or slurry in a solvent (usually water) which is subjected to a temperature gradient that causes ice crystals to form in desired patterns. The ice is then subjected to heating causing sublimation of the ice crystals which leave behind the solid particles in the structural pattern that was formed by the ice. The slurry can be sintered to form a rigid solid.

The performance of these new sodium and potassium ion batteries has been shown to outperform many other comparable systems, and it uses a sustainably sourced material—cellulose—in the slurry.

“We were astounded with the performance of these new batteries. There is great potential to develop these further and to produce larger scaled devices with the technology,” said Steve Eichhorn, Professor of Materials Science and Engineering at the University of Bristol in a news release.

“We proposed a novel controllable ice-templating strategy to fabricate low-cost cellulose nanocrystals/polyethylene oxide-derived carbon aerogels with hierarchically tailored and vertically-aligned channels as electrode materials, which can be utilized to well-tuning the rate capability and cycling stability of sodium and potassium-ion batteries,” said Jing Wang, a Ph.D. student in the Bristol Composites Institute. “Benefiting from the renewability of the precursor and scalability at relatively low cost in the environmentally benign synthesis process, this work could offer an appealing route to promote large-scale applications of sustainable electric vehicles and large-scale energy storage grids in the near future.”

Professor Eichhorn said: “In light of these findings, we now hope to collaborate with industries to develop this strategy on an industrial scale and to explore whether this unique technology can be easily extended to a variety of other energy storage systems such as zinc, calcium, aluminum and magnesium-ion batteries, thus demonstrating its universal potential in next-generation energy storage systems."