Zhengyu Ju and Guihua Yu, University of Texas at Austin 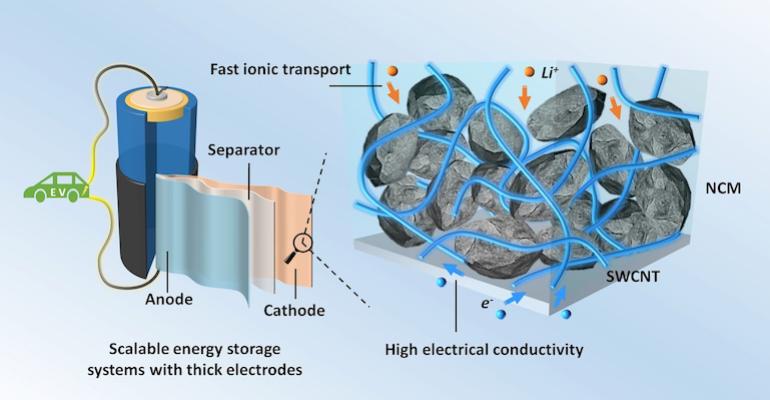 Battery performance is usually a trade-off between high energy density and longevity. However, researchers have devised a new way that uses carbon-based materials to improve the transport of lithium ions in devices to help improve their long-term performance.

A team comprised of scientists from the University of Texas (UT) at Austin, Stony Brook University, and the Brookhaven National Laboratory used conductive carbon fillers that they added to battery electrodes to balance high energy density with reversible energy storage, they said.

Related: Lifting the Limits of Battery Cathodes with Lithium

Researchers used three types of materials in their work to observe their various effects on the electrode material. Fillers examined included single-walled carbon nanotubes (SWCNTs), graphene nanosheets, and a substance known as Super P--a type of carbon black particles that are produced during oxidation of petroleum precursors. Super P also is the most commonly used conductive filler in lithium-ion batteries, researchers noted.

The team added these materials to a type of electrode material known as NCM, which contains nickel, cobalt, and manganese, and then examined the resulting composites using scanning electron microscopy techniques, including Raman and X-ray absorption spectroscopy.

Though lithium-ion batteries remain the key source of portable energy storage and power for myriad devices from smartphones to electric vehicles, a trade-off in design between how energy-dense a device is and how many times it can perform the charge-recharge cycle is a constant challenge for scientists.

Moreover, while the optimum battery design involves thick electrode structures—which enhances energy density—this design does not lend itself to efficient lithium-ion transport, which is key to the efficiency of the overall charge-discharge-recharge process, researchers said.

It’s this aspect of design in which the carbon fillers can help solve the problem, researchers said. The approach is different from other techniques previously tried to improve transport, including building vertically aligned channels or creating pores of the proper size to facilitate the transport of the lithium ions, they said.

“The measured conductivity is consistent with percolation theory, explained Guihua Yu, associate professor of mechanical engineering at UT Austin and one of the researchers on the work. “When an electrically conductive filler is added to an insulating matrix, significant increases in conductivity will occur once the first conducting pathway through the composite is formed.”

Since percolation requires a complete pathway through the filler, researchers knew that they would need to use a certain amount of conductive filler to achieve optimal effectiveness, they said.

The team considered various amounts of filler and eventually discovered that combining NCM electrodes with as little as 0.16% by weight of SWCNT was sufficient enough to produce good electrical conductivity, making these materials the best performers of the group. To achieve the same results, they needed to use higher amounts of Super P and graphene, they said.

Researchers also used a number of configurations for the materials in terms of their arrangement in the electrodes. They arranged Super P and NCM particles in a point-to-point contact mode, while the SWCNTs were wrapped around the NCM particles to form a conductive coating, researchers said.

They also observed networks of interconnected SWCNTs in the spaces between NCM particles. The graphene nanosheets also wrapped themselves around the NCM electrode particles but not as uniformly as the SWCNTs, researchers noted.

The team published a paper on its work in the journal Applied Physics Review.

Researchers hope their work can be used to inform future battery design in which integration of carbon fillers into electrodes can bolster performance, Yu said.

“Our findings suggest that the integration of SWCNTs into the NCM electrode facilitate ion and charge transfer [that] will lead to higher electrochemical utilization, especially at high rates of discharge,” he said in a press statement.