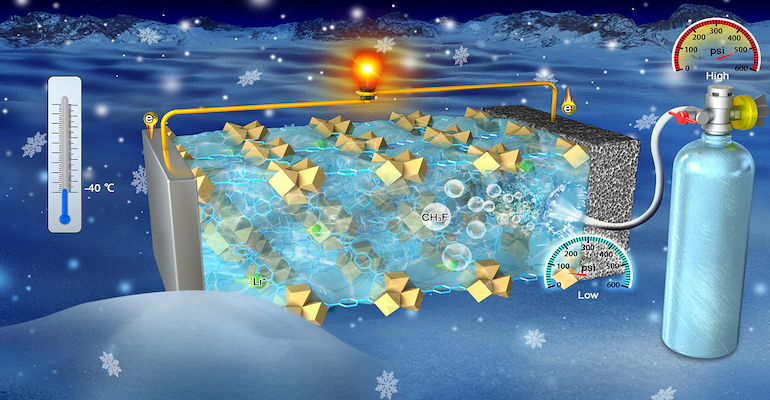 Researchers have developed a new way to separate the anode and cathode in devices with gas electrolytes to keep them from vaporizing.

Batteries that operate with gas electrolytes at temperatures as low as -60 degrees Celsius require a special type of electrolyte called a liquefied gas electrolyte, which turns gas into a liquid by applying pressure to it. This makes the electrolyte much more resistant to freezing than a conventional liquid electrolyte, researchers said.

However, this pressure can also build up, leading to swelling and explosions in these batteries. To prevent this, the separator developed by the team, led by Zheng Chen, a professor of nanoengineering at the UC San Diego Jacobs School of Engineering, was designed to keep the gas-based electrolytes in these batteries from vaporizing, he said.

“By trapping gas molecules, this separator can function as a stabilizer for volatile electrolytes,” he explained in a press statement.

The research by Chen’s group builds on a previous study published in Science by the lab of UC San Diego nanoengineering professor Ying Shirley Meng. Her team is the one that discovered that lithium-ion batteries that can work at temperatures as low as -60 degrees Celsius using a liquefied gas electrolyte.

Once researchers realized a drawback with these devices—that the gas electrolytes have a high tendency to go from liquid to gas, requiring the use of significant pressure to keep the electrolyte in liquid form—Chen’s team collaborated with Meng and UC San Diego nanoengineering professor Tod Pascal to develop a way to liquefy the electrolytes easily without having to apply so much pressure, he said.

The approach they took takes advantage of a physical phenomenon known as capillary condensation, in which gas molecules spontaneously condense when trapped inside tiny, nanometer-sized spaces. This scenario enables a gas to become liquid at a much lower pressure, researchers said.

Knowing this, researchers used capillary condensation to build a battery separator that would stabilize the electrolyte in their ultra-low temperature battery. To do this, they developed a liquefied gas electrolyte made of fluoromethane gas and a separator comprised of a porous, crystalline material called a metal-organic framework (MOF), which has tiny pores that can trap the gas molecules and condense them at low pressures, Chen said. These pores keep more electrolyte flowing in the battery, even under reduced pressure, he said.

“This MOF significantly reduces the pressure needed to make the electrolyte work,” Chen explained in a press statement. “As a result, our battery cells deliver a significant amount of capacity at low temperature and show no degradation.”

Indeed, fluoromethane typically condenses under a pressure of 118 psi at -30 C; but with the MOF, it condenses at just 11 psi at the same temperature, he said.

However, the pores not the only reason for the novel separator’s performance. The separator also was designed so that the pores form continuous paths from one end to the other, allowing lithium ions to flow freely through the separator, researchers said.

The researchers tested the MOF-based separator in lithium-ion battery cells filled with fluoromethane gas electrolyte under internal pressure of 70 psi, which is well below the pressure needed to liquefy fluoromethane. The batteries used a carbon fluoride cathode and a lithium metal anode.

Results showed that the new separator also provides another benefit to the battery—it boosts its performance at ultra-low temperatures. The batteries retained 57% of their room temperature capacity at -40 C. By contrast, cells with a commercial separator exhibited almost no capacity with fluoromethane gas electrolyte at the same temperature and pressure, researchers said.

Moreover, the devices still showed high capacity after sitting unused for two months, which demonstrates the potential for the electrolyte to prolong a device’s shelf life, they added.

Chen said the technology brings researchers a step closer to building lithium-ion batteries that can power vehicles in the extreme cold, such as spacecraft, satellites, and deep-sea vessels.

The team is now testing the MOF-based separator on other electrolytes and “seeing similar effects,” he said.

“We can use this MOF as a stabilizer to adsorb various kinds of electrolyte molecules and improve the safety even in traditional lithium batteries, which also have volatile electrolytes,” Chen said in a press statement.