Could Reversible Rusting be a Solution to Renewable Energy Storage? 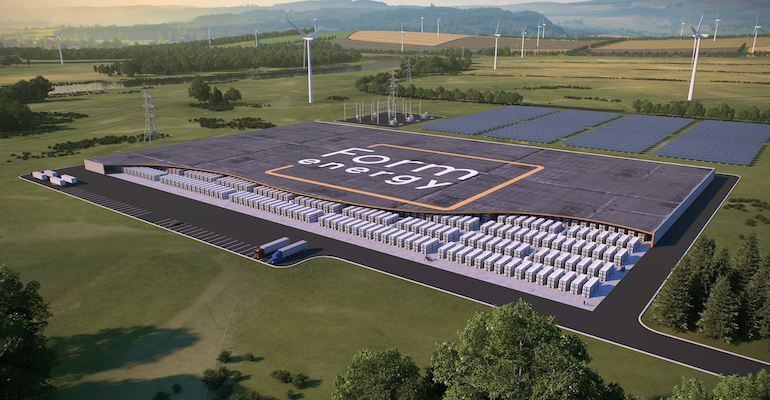 An iron-air battery is under development that could help with renewable energy storage using Earth-abundant materials.

If intermittent renewable energy sources like wind and solar are going to completely replace fossil fuels, there needs to be a way to store the energy that they produce when the wind is blowing, and sun is shining and return it when it is calm or at night. A variety of schemes are under investigation, including electrochemical storage of electrical energy using batteries. For example, companies like Tesla are strong advocates of using lithium-ion battery chemistries, and others like StorEn Technologies are proposing vanadium flow batteries as the best solution.

One of the keys to renewable energy storage is that it must be cheap, and that implies it must use easily available Earth-abundant materials to produce its electrochemical storage reactions. That’s the idea behind a battery that uses iron, water and air that is under development by a Somerville, Massachusetts based company called Form Energy that was founded in 2017. The basic principle of operation this battery is literally reversible rusting of the iron electrodes. While discharging, the battery breathes in oxygen from the air and converts iron metal to rust. When charging, the application of an electrical current converts the rust back to iron and the battery breathes out oxygen.

In company literature, Form Energy describes the individual batteries as being “about the size of a washing machine.” The battery modules are filled with a water-based, non-flammable electrolyte, which the company says is similar to the electrolyte used in AA batteries. Inside the battery are stacks of between 10 and 20 meter-scale cells, which include iron electrodes and air electrodes, which are the parts of the battery that produce the electrochemical reactions that store and discharge electrical energy. 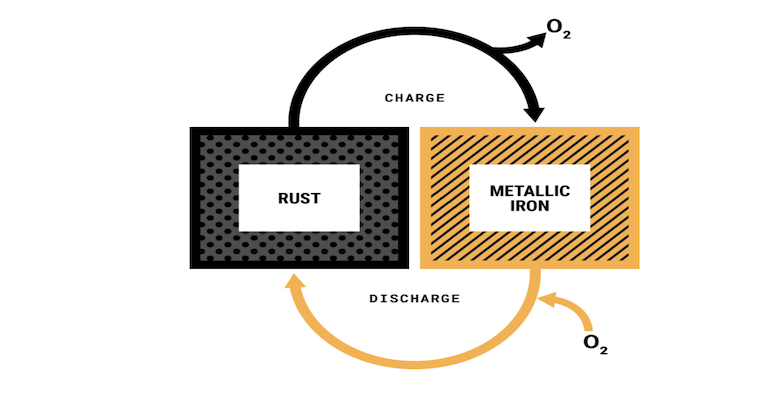 The battery modules are grouped together into megawatt-scale power blocks, made from thousands of battery modules in a protective enclosure. Tens to hundreds of these power blocks can be connected to the electricity grid—a megawatt storage system will require about an acre of land. The iron-air battery is capable of delivering electricity for 100 hours at system costs competitive with conventional power plants and at less than 1/10th the cost of lithium-ion.

Mateo Jaramillo, CEO and Co-founder of Form Energy, said in a company news release that, “We conducted a broad review of available technologies and have reinvented the iron-air battery to optimize it for multi-day energy storage for the electric grid. With this technology, we are tackling the biggest barrier to deep decarbonization: making renewable energy available when and where it’s needed, even during multiple days of extreme weather or grid outages.”

Form Energy and ArcelorMittal are working jointly on the development of the iron based battery storage system. ArcelorMittal is the world's leading steel and mining company, with a presence in 60 countries and primary steelmaking facilities in 17 countries. The battery systems can be sited anywhere, even in urban areas, to meet utility-scale energy needs and Form Energy intends to source the iron domestically and manufacture the battery systems near where they will be sited. Form Energy’s first project is with Minnesota-based utility Great River Energy, located near the heart of the Iron Range.

“Form Energy is at the leading edge of developments in the long-duration, grid-scale battery storage space. The multi-day energy storage technology they have developed holds exciting potential to overcome the issue of intermittent supply of renewable energy,” said Greg Ludkovsky, Global Head of Research and Development at ArcelorMittal in the Form Energy news release.