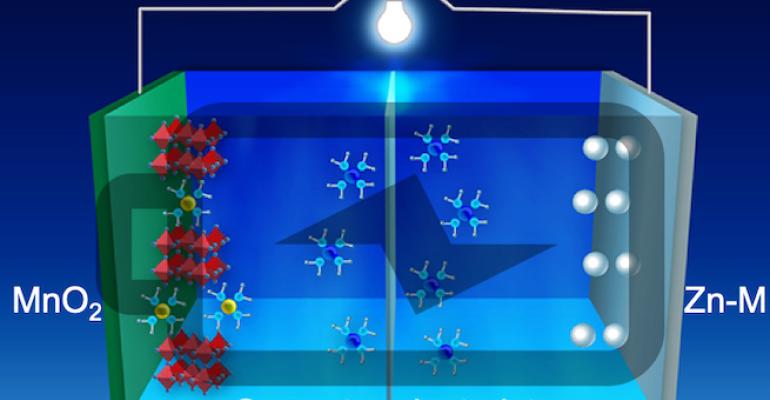 The future will be bright if we can figure out how to build better batteries with earth-abundant, environmentally friendly, and less expensive materials. That’s the premise behind the development of metal-anode-based batteries that use aqueous electrolytes to replace the flammable organic solvents that are used in today’s commercial lithium-ion batteries. Anodes for lithium-ion batteries are typically made from layers of carbon graphite, which serve to store lithium ions during charging through a process called intercalation. The lithium ions are released from the anodes during discharging of the battery, traveling through the electrolyte to the cathode and freeing electrons that can be used to power electrical devices. The cathode in a high energy density lithium-ion battery is typically made from a combination of nickel and cobalt—both of which are expensive materials—along with aluminum or manganese.

Instead of intercalation of lithium ions in graphite, it is possible to use lithium metal as an anode and source for the ions. This produces a battery with a high energy density, but when charging, lithium ions can form deposits of spikey lithium dendritic crystals on the anode surface. These dendrites can grow large enough to bridge the gap between the anode and cathode, shorting out the battery and potentially causing a fire, which is made even worse by the flammable electrolyte used in lithium-ion batteries.

Although current lithium-ion batteries are finding commercial success in everything from cell phones to electric vehicles (EV), there is a push to find materials that less expensive and more abundant, while also improving battery safety by eliminating the flammable organic solvents used for today’s electrolytes. Aqueous electrolytes could be one answer.

“Aqueous batteries, which use water-based conducting solutions as the electrolytes, are an emerging and much safer alternative to lithium-ion batteries. But the energy density of aqueous systems has been comparatively low, and also the water will react with the lithium, which has further hindered aqueous batteries’ widespread use,” said Zhenxing Feng, a chemical engineering researcher at Oregon State University in an OSU press release. The large-scale use has been limited, however, hindered by a limited output voltage and low energy density.

Lithium isn’t the only element in the periodic table, and a zinc-based system is looking like it might be a promising candidate for a battery that uses an aqueous electrolyte. Ordinarily, zinc metal anodes have the same dendritic growth problems that lithium metal anodes exhibit. But a group of researchers from OSU, University of Houston (UH), and the University of Central Florida is working with a new 3D zinc-manganese nano-alloy anode that is claimed to overcome the limitations, resulting in a stable, high-performance, dendrite-free aqueous battery. What’s more, the team is using seawater as the electrolyte.

“The use of the alloy with its special nanostructure not only suppresses dendrite formation by controlling the surface reaction thermodynamics and the reaction kinetics it also demonstrates super-high stability over thousands of cycles under harsh electrochemical conditions,” Feng said. “The use of zinc can transfer twice as many charges as lithium, thus improving the energy density of the battery.

“We also tested our aqueous battery using seawater, instead of high purity deionized water, as the electrolyte,” he added. “Our work shows the commercial potential for large-scale manufacturing of these batteries.” Testing determined that the 3D zinc-manganese nano alloy anode remained stable without degrading throughout 1,000 hours of charge/discharge cycling under high current density (80 mA/cm2).

Beyond zinc-manganese, the research teams are examining zinc-nickel, zinc-cobalt, zinc-iron, and zinc-magnesium as possible anode alloys. One goal is to inspire follow-up work by other research groups in order to move the idea of lower cost and safer batteries using aqueous electrolytes more rapidly forward.