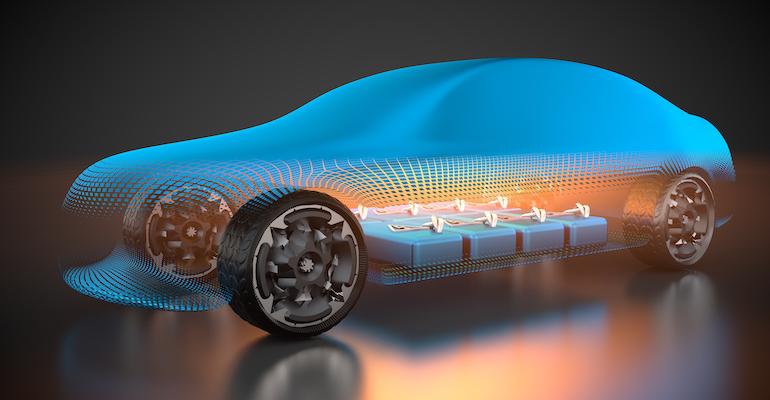 Researchers at the U.S. Department of Energy have made a significant discovery in the chemistry of high-capacity lithium batteries that can lead to the development of smaller, lighter, and less expensive batteries for electric vehicles (EVs).

A team of chemists at Brookhaven National Laboratory identified new details of a chemical reaction that takes place in batteries with lithium-metal anodes, which are different than the graphite anodes typically used in commercial batteries currently found in myriad devices and EVs.

Scientists long have known this type of anode to have significant advantages for high-performance batteries, said Brookhaven chemist Enyuan Hu, who worked on the project.

“Their advantage is two-fold,” he said in a press statement. “First, their specific capacity is very high; second, they provide a somewhat higher voltage battery. The combination leads to a greater energy density.”

However, the lack of “reversibility” of these anodes—or the ability to be recharged through a reversible electrochemical reaction—has been a roadblock to their widespread use in commercial devices, which is why researchers turned to graphite.

Now, however, researchers believe they can make lithium-metal anodes reversible using the interphase, or the solid material layer that forms on the battery’s electrode during the electrochemical reaction.

“If we are able to fully understand the interphase, we can provide important guidance on material design and make lithium metal anodes reversible,” Hu said in a press statement.

This understanding historically has been a challenge because the interphase is tricky to work with because it’s very thin, with a thickness of only several nanometers, he noted. The layer also has an extreme sensitivity to air and moisture.

The work of the Brookhaven scientists was done as part of a consortium called Battery500, led by DOE’s Pacific Northwest National Laboratory (PNNL) and comprised of researchers across several national laboratories and DOE-sponsored universities have formed.

The goal of the group is to make battery cells with an energy density of 500 watt-hours per kilogram, which is more than double the energy density of today’s state-of-the-art batteries. To achieve this, the consortium is focusing on batteries made with lithium-metal anodes. 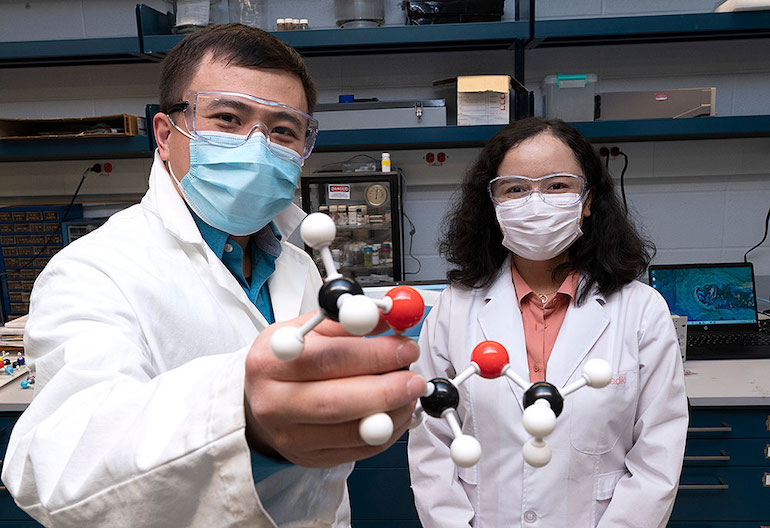 Brookhaven chemists Enyuan Hu (left, lead author) and Zulipiya Shadike (right, first author) are shown holding a model of 1,2-dimethoxyethane, a solvent for lithium-metal battery electrolytes. The researchers were part of a team that delved into the chemistry of lithium-metal anodes to create new battery designs for electric vehicles.

To solve the challenges associated with this type of anode, researchers first had to investigate the chemistry of the interphase. To do this, they used the National Synchrotron Light Source II (NSLS-II), a DOE facility at Brookhaven that generates ultrabright X-rays to study material properties at the atomic scale.

Using this technology, the scientists could examine a small sample of the chemistry to generate useful data, Hu said. Further, they used an X-ray Powder Diffraction beamline to probe all the components of the interphase, including crystalline and amorphous phases of the anode.

The result of this analysis was the discovery of the existence of lithium hydride (LiH) in the interphase, something researchers had been debating for years.

“When we first saw the existence of LiH, we were very excited because this was the first time that LiH was shown to exist in the interphase using techniques with statistical reliability,” Hu explained in a press statement. “But we were also cautious because people have been doubting this for a long time.”

Indeed, since LiH and lithium fluoride (LiF) have very similar crystal structures, the scientists’ work could have drawn criticism that they misidentified the material, they said.

To further prove their discovery, researchers also used an air exposure experiment so there would be no doubt as to what they found, they said. LiF is air-stable, while LiH is not Thus, researchers exposed the interphase to air with moisture, which decreased over time the amount of compound being examined. This confirmed the existence of LiH, not LiF, they said.

In addition to this discovery, researchers also solved another longstanding misconception about LiF, which long has been considered a favored component in the interphase without scientists knowing exactly why. The team identified that the reason for this is are structural differences between LiF in the interphase and LiF in the bulk, with the former facilitating lithium ion transport between the anode and the cathode.

Researchers published a paper on their work in the journal Nature Nanotechnology.

Their discoveries about the inner workings of lithium-metal anodes provide practical guidance for the use of lithium-metal anodes in new energy-storage devices, researchers said. The Brookhaven team will continue to work within the context of Battery500 to investigate and apply their discovery in collaboration with other experts in the field, researchers said.