Earth-abundant Elements like Aluminum Could Replace Lithium in Batteries 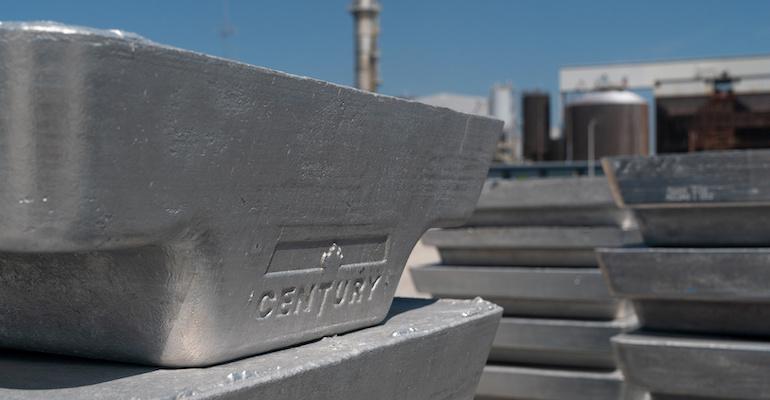 Replacing lithium with much more abundant aluminum could produce batteries with higher energy density at a much lower cost.

One area of intense battery research is to find ways to use low-cost, Earth-abundant elements to develop batteries that can eventually replace lithium-ion batteries. The commercial success of lithium-ion batteries in applications as diverse as cell phones, laptop computers, electric vehicles (EVs), and grid storage is making them a tough act to follow. One element that seems promising in the replacement of lithium is aluminum.

An aluminum-ion battery fundamentally replaces lithium ions as charge carriers with aluminum ions. The theoretical voltage of an aluminum-ion battery is lower at 2.65 volts than the 4.0 volts of a lithium-ion battery, but the theoretical energy density of 1060 watt-hours/ kilogram is significantly higher than the 406 watt-hours/kilogram of lithium-ion batteries. Inside the battery, aluminum can provide three electrons during electrochemical reactions, while lithium can only provide one electron, allowing aluminum to transfer energy more efficiently. Aluminum is also the third most abundant material, making it cheap and available compared to lithium, which is the 25th most abundant and relatively expensive.

Of course, we aren’t using commercial aluminum-ion batteries because there are challenges. When used in a battery with a traditional graphite anode (negative electrode) the much larger aluminum ions will fracture the graphite, reducing shelf life and decreasing the energy capacity of the aluminum-ion battery. In addition, aqueous (water-based electrolytes) can produce corrosion and generate harmful amounts of hydrogen gas, so ionic electrolytes are preferred. Ionic electrolytes can be expensive to produce, reducing the cost advantages of using aluminum in the first place. Aluminum also reacts chemically with the glass fiber separator, which physically divides the anode and the cathode inside the battery. This unwanted reaction can cause the battery to short circuit and fail.

Researchers at Cornell University, led by Lynden Archer, the Joseph Silbert Dean of Engineering, and the James A. Friend Family Distinguished Professor of Engineering, have been exploring the use of low-cost materials, including aluminum, to create rechargeable batteries that will make energy storage more affordable.

The researchers designed a substrate of interwoven carbon fibers that forms a strong chemical bond with aluminum. When the battery is charged, the aluminum is deposited into the carbon structure via covalent bonding, allowing the sharing of electron pairs between aluminum and carbon atoms.

“A very interesting feature of this battery is that only two elements are used for the anode and the cathode – aluminum and carbon – both of which are inexpensive and environmentally friendly,” said Jingxu (Kent) Zheng, who is currently a postdoctoral researcher at the Massachusetts Institute of Technology. “They also have a very long cycle life. When we calculate the cost of energy storage, we need to amortize it over the overall energy throughput, meaning that the battery is rechargeable, so we can use it many, many times. So, if we have a longer service life, then this cost will be further reduced,” added Zheng in a Cornell news release.

The technique uses a three-dimensional – or nonplanar – architecture and creates a deeper, more consistent layering of aluminum that can be finely controlled when the electrode is created. “Basically, we use a chemical driving force to promote a uniform deposition of aluminum into the pores of the architecture,” Zheng said. “The electrode is much thicker and it has much faster kinetics.”

The aluminum-anode batteries can be reversibly charged and discharged more than 10,000 times, an order of magnitude more times than other aluminum rechargeable batteries under practical conditions.

“Although superficially different from our earlier innovations for stabilizing zinc and lithium metal electrodes in batteries, the principle is the same – design substrates that provide a large thermodynamic driving force that promotes nucleation; and runaway, unsafe growth of the metal electrode is prevented by forces such as surface tension that can be massive at small scales,” said Archer.

There are still several challenges that aluminum-ion batteries face before they will be ready for prime-time, including finding a less expensive and more adaptable electrolyte. Still, the work by the Cornell researchers looks promising and may eventually result in a much lower cost for electrical energy storage.