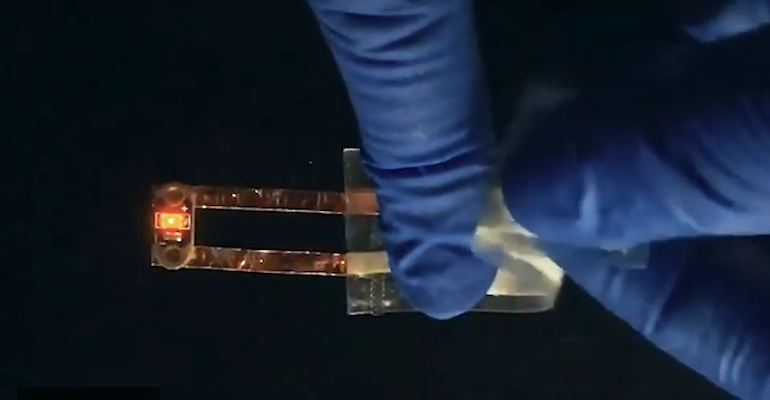 Silver oxide-zinc device can be fabricated using screenprinting and offers a new option for next-gen wearables and other electronics.

Battery researchers have taken another step toward finding a viable replacement for lithium-ion batteries in the next generation of flexible and wearable electronic devices.

A team from the University of California (UC) San Diego has teamed up with California-based company ZPower to create a flexible battery that can support up to 10 times more energy density than current lithium-ion designs, they said.

While most flexible batteries must be manufactured in sterile conditions, under vacuum, this one can be fabricated using screen printing in normal lab conditions, he said. This ease of manufacturing combined with its energy density provides new design capabilities for future electronics, Yin said.

The battery itself was built using ZPower’s AgO-Zn cathode material, which has benefits over typical cathodes made with AgO-Zn that are known for limited cycle life and low capacity. This drawback has made them unsuited for use in low-power, disposable electronics, researchers said.

The reason ZPower’s AgO cathode material stands out is that it uses a proprietary lead oxide coating to improve AgO’s electrochemical stability and conductivity, researchers said. This chemistry also gives the battery low impedance--or the resistance of an electric circuit or device to alternative current--which is assisted by current collectors with high conductivity, according to the team.

The resulting battery has an areal capacity of 50 milliamps per square centimeter at room temperature, which is 10-20 times greater than the areal capacity of a typical lithium-ion battery, researchers said. Comparatively, over the same surface area, the battery can provide 5 to 10 times more power in joules, Yin noted.

"This kind of areal capacity has never been obtained before," Yin said in a press statement. "And our manufacturing method is affordable and scalable."

That manufacturing method took some time and effort to create, as it is the first time AgO has been used in a screen-printed battery, researchers said. This is because the material is highly oxidative and chemically degrades quickly.

To overcome these challenges, researchers in Wang’s lab at UC San Diego discovered an ink formulation that makes AgO viable for printing. This allowed the team to print the new battery in seconds--once the inks are prepared--onto a polymer film that is chemically stable, elastic, and has a high melting point that can be heat sealed, researchers said. The process allots one stacked screen-printed layer each for current collectors, the zinc anode, the AgO cathode, and their corresponding separators, they said.

The team published a paper on its work in the journal Joule. Researchers used batteries that they printed to power a flexible display system equipped with a microcontroller and Bluetooth modules, reporting that they performed better than commercially available lithium-ion coin cells.

The batteries could be recharged for more than 80 cycles without significant capacity loss and remained in working order despite repeated bending and twisting, researchers added.

"Our core focus was to improve both battery performance and the manufacturing process," Meng, who also is director of the UC San Diego Institute for Materials Discovery and Design, said in a press statement.

The team envisions applications for the device that include flexible, stretchable electronics for wearables as well as soft robotics, she added.

Researchers already are working on a next-generation device with an even lower impedance so it can provide even faster charging and be used in 5G devices and soft robotics that require high power and customizable and flexible form factors, they said.