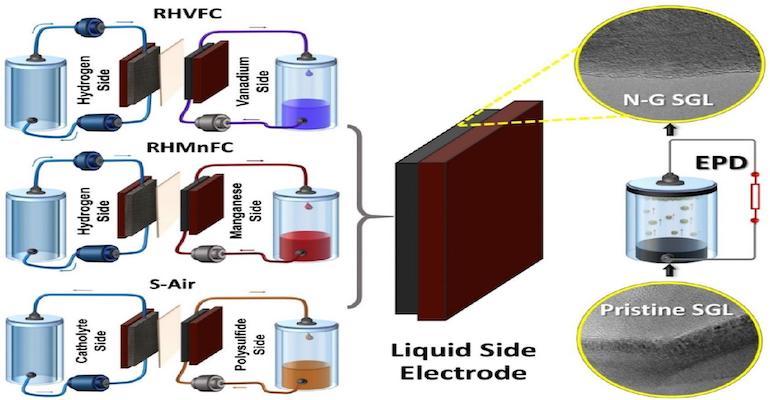 The key to the future of renewable energy is the ability to store vast amounts of energy, safely and cheaply. Although companies like Tesla have built utility-scale energy storage using lithium-ion batteries, the most cost-effective approach is still considered to be flow batteries.

Lithium-ion batteries consist of a negative electrode (anode), a positive electrode (cathode), and an electrolyte that allows the motion of lithium ions, all within a single case or container. A flow battery is different. It stores reactive electrolyte liquids in separate containers and pumps them through a reactor tank that contains a stack of inert electrodes that strip electrons out of the electrolyte solution to produce electric power. Typically, an ion-exchange membrane keeps the two electrolyte solutions separate from one another in the reactor. The capacity of a flow battery to store energy is simply related to the size of the containers holding the reactive liquids. This means that because energy is stored in the electrolyte, the amount of storage capacity is independent of the power level.

The material used for the two electrolytic solutions must form a reduction-oxidation (redox) couple, where reduction is the gain of electrons and oxidation is the loss of electrons. Commercially available flow batteries are made from either zinc and bromine or a combination of various oxidation and reduction states of the metal vanadium. Both types of flow batteries are expensive. Bromine is a highly toxic material and the corrosive nature of the electrolyte of a zinc-bromine flow battery requires components that can handle the aggressive environment. Vanadium itself is an expensive material and flow batteries containing vanadium can have up to 43% of their cost just in the vanadium materials.

How to Get Cheaper

The search for a lower cost option has led researchers to hybrid flow batteries. In a hybrid flow battery, the electrolyte contains one or more dissolved electroactive elements and flows through a reactor cell where the chemical energy is converted to electrical energy. The electrolytes are stored in separate tanks corresponding to the positive and negative electrodes. Because there is no insertion of ions into the electrodes, they remain intact and are not susceptible to stresses and cracking. In addition, the flowing liquid electrolyte helps to cool the electrodes and prevent overheating.

The electrodes, typically a metal hydride for the anode and a carbon graphite material for the cathode, have a significant effect on the performance and durability of the hybrid flow battery. That’s why a recent report by the University of Warwick (WMG) in the UK is of interest. WMG researchers have found a way, through a combination of carbon-based electrodes, treated using a simple and yet effective electrophoretic deposition (EPD) of nano-carbon additives (nitrogen-doped graphene), and economically sourced electrolytes of enhancing hybrid flow battery performance and durability, while significantly reducing costs.

In all three systems, the combination of the use of nanocarbon additives and carbon paper electrodes, with electrophoretically deposited nitrogen-doped graphene (N-G) with carbon electrodes, provided benefits. The hydrogen/vanadium offered an efficiency increase of over 70% while the hydrogen/manganese system achieved a 30% increase in energy efficiency. The S-Air cell showed a 3-fold improvement of kinetics compared to the bare carbon paper electrode.

“This EPD technique is not only simple but also improves the efficiencies of three different economical hybrid flow batteries thereby increasing their potential for widespread commercial adoption for grid-scale energy storage,” said Barun Chakrabarti, a Research Fellow in WMG at the University of Warwick and one of the researchers on the project.

Not only did performance and durability in highly acidic or alkaline environments improve, but according to WMG, the hybrid flow battery’s total chemical cost was about 1/30th the cost of competing batteries, such as lithium-ion systems. When the technology is scaled up, MWG expects large-scale electricity storage from wind or solar power, for multiple days, could be achieved for about $20-$25 per kilowatt-hour, compared to the $100-$175 cost for an equivalent lithium-ion battery system.