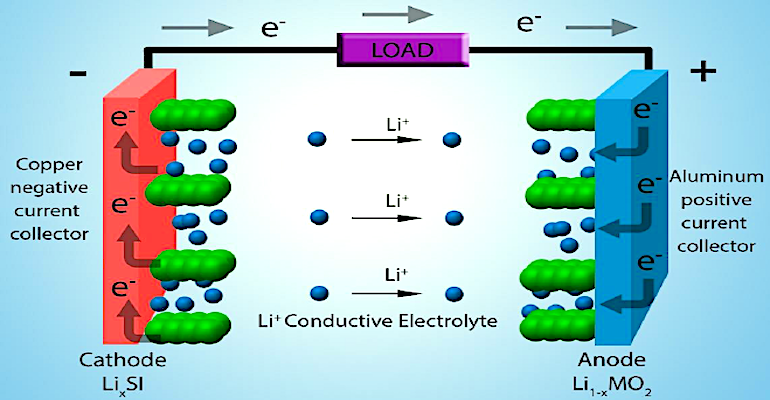 Lithium-ion batteries are made up of a variety of components. There is a positive electrode (cathode) that is usually made up of a metal oxide. There is a negative electrode (anode) that is typically a form of carbon graphite material. Between the electrodes is a liquid organic solvent electrolyte that allows the transfer of ions, and an ion-permeable plastic separator. Charge collectors (usually thin sheets of aluminum) back the cathode and anode to aid in the flow of electrons. The entire cell is made up of a long strip that is rolled up into a cylinder (jelly roll) or placed in a flexible plastic pouch or rigid plastic box-like structure.

Let’s consider the anode. The graphite material of the anode is placed in sheets or layers and reversibly allows the placement of lithium ions into (intercalation) or out of (deintercalation) during charging and discharging, respectively. Anode materials must allow fast diffusion of lithium ions into the structure, high ionic and electron conductivity, minimal structural changes (expansion and contraction) during charging and discharging, a high capacity for lithium ions, and an ability to form and maintain a stable Solid Electrolyte Interface (SEI) during the charge and discharge cycling. 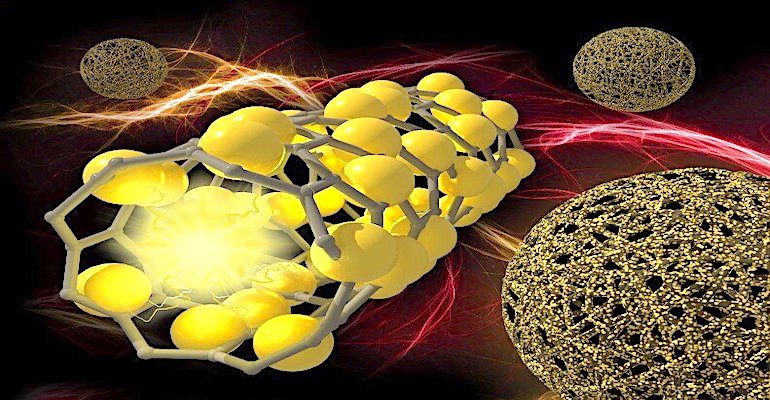 Silicon microspheres have extraordinary mechanical strength due to the addition of carbon nanotubes which make the spheres resemble balls of yarn. In this representation, the image on the left illustrates a close-up of a portion of a microsphere made of silicon nanoparticles deposited on carbon nanotubes.

Battery anodes require silicon oxide coated spherical graphite at over 99.9% purity and, at present, 100% of natural spherical graphite is produced in China. Synthetic or artificial graphite can also be used in anodes and when that is added into the mix, China and Japan together sell more than 95% of the total global anode materials.

Some alternatives are under consideration for the graphite used in lithium-ion battery anodes. Silicon as used in computer chips and electronics devices is getting a lot of attention. Potentially, silicon can hold 10 times the electrical charge per gram when compared to graphite, resulting in a battery with a much higher capacity and charge density. But the problem is when lithium ions enter the silicon structure, it expands greatly, and the volumetric changes can create cracking and disconnection of the silicon from its electron charge collector after just a few charge and discharge cycles. Silicon also can form a highly resistive SEI, reducing its ability to transfer ions. A variety of efforts are underway using stress relief through silicon nanostructures or the addition of carbon nanotubes, but nothing is ready for widespread commercial application at the moment.