How can Better Material Interfaces Boost the Flow of Electrons in Solar Panels? 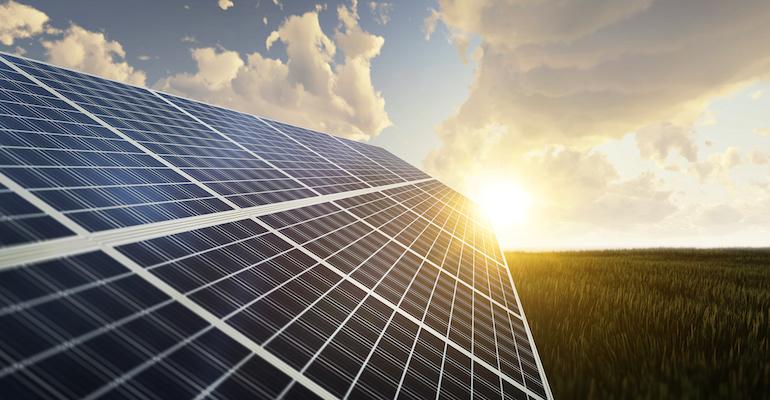 Researchers aim to identify better material interfaces for devices to boost the flow of electricity and create improvements.

As part of their work to improve solar cells to maximize the potential for renewable energy, physicists have analyzed noise signals inside the electrical current created by materials in these cells to identify limitations to their efficiency.

A team comprised of researchers from the University of Utah and Helmholtz-Zentrum Berlin used a technique called cross-correlation noise spectroscopy to measure minuscule fluctuations in the electrical current flowing between materials inside silicon solar cells, they said.

Related: Goodbye to Coal? Hello to Wind and Solar! Clean Energy Is Growing

Their technique allowed them to identify critical electrical noise signals that conventional noise-measuring methods can’t, narrowing down on the processes that cause the noise, which can result in a loss of energy and decreased efficiency, said Kevin Davenport, associate instructor of physics at the University of Utah.

“Measuring noise on an object is relatively simple,” he explained in a press statement. “You can just buy devices that do it. But the problem that plagues us is that these devices also have noise.”

By using a new cross-correlational technique that researchers developed, they could not only measure the noise of the solar cell but also the noise of the device they use to detect noise so they can remove it to identify much smaller noise signals, Davenport explained. 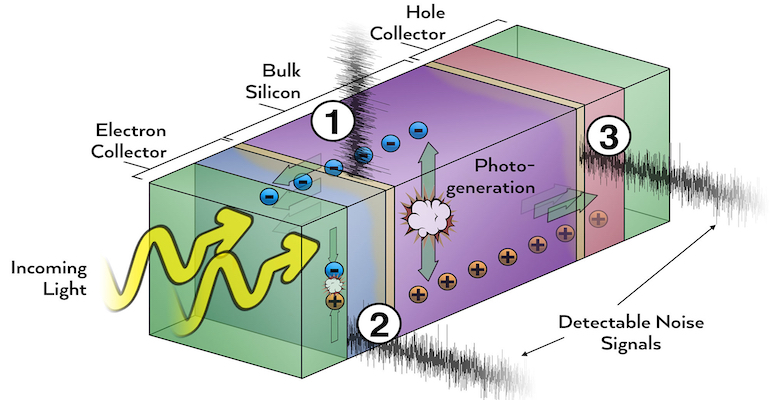 A cartoon schematic of a silicon heterojunction solar cell and its photo-generated charges. The numbers correspond to three of the major electrical noise signals identified by the researchers in the study. These noise signals occur when 1) electrons and 3) holes pass through the layers and 2) when charges are trapped at the boundary between the silicon and the transparent ITO layer at the front of the device

Specifically, researchers analyzed silicon heterojunction solar cells (HSCs), a high-end type of single-material solar cell. The ones the team worked with are currently the most efficient of these types on the market, converting 26.7 percent of light hitting the cell into electricity.

To understand how noise can create inefficiencies, one must understand the structure and inner workings of HSCs. These cells generate electricity when a photo-active layer comprised of crystalline silicon absorbs photons, resulting in the creation of pairs of negatively charged electrons and positively charged holes. An electrical field, created by two selective contacts made of hydrogenated amorphous silicon modified with impurities, then pulls the electrons and holes in opposite directions.

What creates inefficiencies in cells is that the selective electrode and photo-active silicon do not match together perfectly, creating defects that trap electrons, researchers said. To eliminate these defects, researchers place between them an ultrathin layer of pure amorphous silicon. Finally, these five layers are sandwiched between two layers of transparent conducting material, known as ITO, and gold electrodes.

The efficiency of HSCs depends then on how well the different layers are connected together. If two layers are even slightly mismatched, electrons will have a transport problem, which will produce a noise signal, Davenport explained.

“That problem is kind of hidden inside these interfaces, and it’s really difficult to be able to detect any kind of signal,” he said in a press statement. “But the noise technique that we use is very sensitive to really, really small individual signals.”

By being so finely tuned—able to identify a wide spectrum of different noise signals and different positions along the frequency axis—researchers can pinpoint which process is creating which noise, Davenport noted.

However,  “the device is full of these processes that all generate noise and it’s really difficult to un-entangle them—like pulling out a single voice in a 200-person chorus,” he explained in a press statement.

Cross-correlation noise spectroscopy allowed researchers to remove a lot of the unwanted portion of the signal, providing a new tool to improve material interfaces for a better solar cell or to analyze inefficiencies in other complicated devices, researchers said.

Researchers published a paper on their research in the journal Scientific Reports.

What they found in their analysis is that while silicon HSCs—with more efficiency than that typical 20 percent or so of commercial solar cells on the market—still have limits.

One key area where electrical noise signals and thus inefficiencies occur are at the interface of the device, where charges are trapped and released, the team learned from its work.  Another major signal occurred as holes passed through a similar barrier on the backside of the device.

Researchers believe that by identifying areas in the device where specific physical processes are producing electrical signals through their work, tweaks can be made that can improve the overall efficiency of the cells, they noted.

“The ability to detect these signals means that we can understand their sources and mitigate them,” Davenport said.

Solar Energy can be Stored for Months With This Innovative Material
Apr 22, 2021