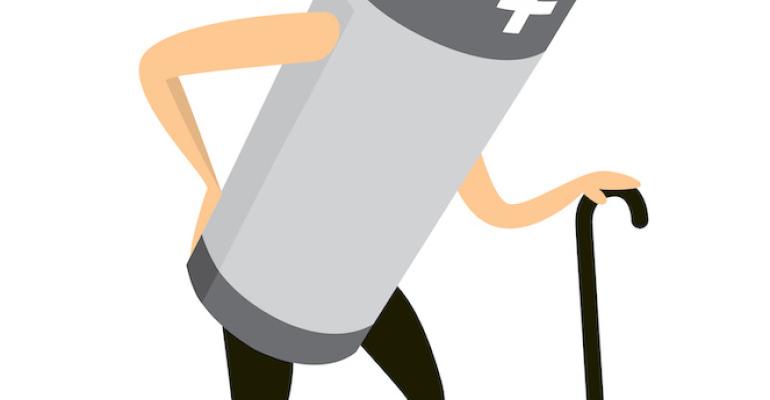 The electrolyte may be the reason next-generation lithium metal batteries suffer from rapid aging.

Replacing the graphite negative electrode (anode) in present-day commercial lithium-ion batteries with a strip of lithium metal promises to increase the energy density of individual cells by up to three times or more. It isn’t that simple, of course as lithium metal batteries bring a whole host of challenges such as uneven plating of lithium onto the anode surface during charging and finding ways to manufacture the new cells on existing production equipment that will need to be addressed before the technology will be ready for primetime.

One unexpected issue is called “calendar aging.” An ordinary lithium-ion battery will typically lose just 2-3% of its charge if left unused for a period of around 3 years. Experimental lithium metal batteries have been observed to lose that same 2-3% over 24 hours. Although the draining of the charge lessens over time, the overall effect can be a reduction of the battery’s lifetime of 25%.

In ordinary lithium-ion batteries, the electrolyte corrodes the surface of the graphite anode, and in the process creates a layer called the solid-electrolyte interphase (SEI). This layer consumes a small amount of battery capacity, but also protects the anode from further corrosion and protects against calendar aging. A smooth, stable SEI layer is required for optimum lithium-ion battery performance.

The Electrolyte is the Key

To determine if the same mechanism occurs with a lithium metal anode, scientists working at Stanford University and the Department of Energy's SLAC National Accelerator Laboratory have taken the first atomic-scale look at how calendar aging occurs. They discovered that it is the nature of the battery electrolyte, which carries charge between the electrodes, to attack lithium metal anodes and therefore electrolytes have a big impact on aging.

"Our work suggests that the electrolyte can make a big difference in the stability of stored batteries," said SLAC and Stanford Professor Yi Cui, who led the study with Stanford Professor Zhenan Bao. "This is something people haven't really spent time looking at or using as a way to understand what's going on," Cui added in a SLAC news release.

Lithium metal batteries undergo rapid calendar aging, which drains the battery even when it’s not being used and reduces its capacity. The battery electrolyte corrodes lithium metal anode particles (top left) or lithium metal filaments that form on the anode during charging (top right). The corrosion creates irregular clumps of a layer called SEI (bottom left and right).

The SLAC team decided to look at the calendar aging properties of a variety of electrolytes that had been developed to help solve some of the other problems exhibited by lithium metal battery anodes.

To do so, they first measured the charging efficiency of lithium-metal batteries containing the various types of electrolytes. Then, the fully charged batteries were allowed to sit for a day before being dismantled, removing the anode and flash freezing it in liquid nitrogen to preserve its structure and chemistry at a specific point in the calendar aging process.

The anodes were examined with a cryogenic electron microscope to see how the various electrolytes affected the anode at close to atomic scale. They found that in lithium-metal batteries, each time the battery is charged a thin layer of lithium metal is deposited on the surface of the anode. This layer offers a fresh surface for fresh corrosion during calendar aging. “We found much more aggressive growth of the SEI layer on these anodes due to more aggressive chemical reactions with the electrolyte,” researcher William Huang said in the SLAC release. According to the researchers, “Each electrolyte they tested gave rise to a distinctive pattern of SEI growth, with some forming clumps, films or both, and those irregular growth patterns were associated with faster corrosion and a loss of charging efficiency.”

Electrolyte Design Will Be Critical

They also found that electrolytes that would support highly efficient charging were just as likely to exhibit drops in efficiency due to calendar aging as less efficient electrolytes. According to Cui, there was no one electrolyte chemistry that did both things well.

“What’s really important is that this gives us a new way of investigating which electrolytes are most promising,” Bao said. “It points out a new electrolyte design criterion for achieving the parameters we need for the next generation of battery technology.” To minimize calendar aging, the corrosive nature of the electrolyte will need to be minimized, as well as the extent of the lithium metal on the anode’s surface that it can attack.