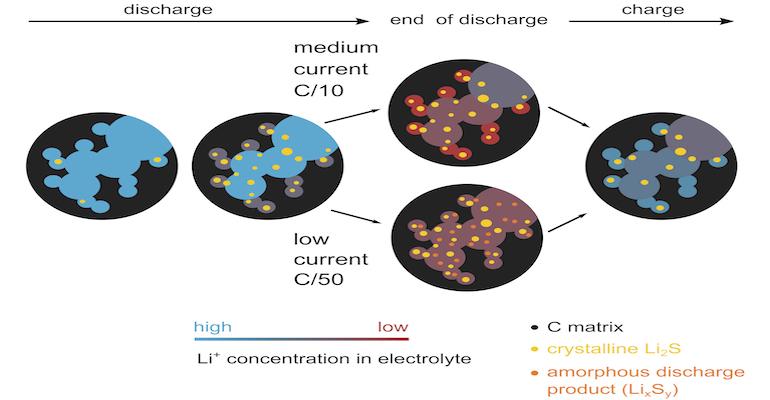 The figure shows how different reaction products in a lithium-sulfur battery form depending on how fast the battery is charged, and thus how various bottlenecks arise that change their efficiency. Researchers can use this information to develop better batteries
Localized storage of lithium is one reason that these devices suffer from a reduction in current and short lifespan, researchers in Sweden have discovered.

Lithium-sulfur batteries are an attractive option to supplement or replace lithium-ion batteries for future applications. However, while these types of devices can generally store more energy than lithium-ion ones, they historically have been hindered by short battery life and other energy-flow issues.

Now researchers in Sweden have identified performance factors related to material formation in lithium-sulfur batteries that can potentially extend the amount of discharge/charge cycles they can maintain, they said. Specifically, a team from Uppsala University has identified that the main bottleneck for electrical current in these devices is localized storage of lithium.

Related: Just a Spoonful of Sugar? It Might Help Sweeten Lithium Sulfur’s Future

Pinpointing the intricacies of performance and how it can be bolstered is “a big research challenge in a system as complex as lithium-sulfur,” observed Daniel Brandell, professor of materials chemistry at Uppsala University. However, it’s key to identify the bottlenecks hampering performance to take the next steps to developing commercially viable energy-storage devices, he said.

To do this, Brandell and a team at the university’s Ångström Advanced Battery Center used various radiation-scattering techniques to examine the material processes of a sulfur-lithium device. These techniques included X-ray analyses that they conducted locally as well as neutron results that were acquired through a partnership with the Institut Laue Langevin, a research facility in Grenoble, France.

Related: Could EVs Use This New Lithium-Sulfur Battery to get Greater Range?

“These instruments are expensive but are necessary to understand such complex systems as these batteries,” acknowledged Adrian Rennie from the Institut. “Many different reactions happen at the same time and materials are formed and can disappear quickly during operation.”

The team’s work focused on the electrochemical processes that occur in the positive electrode of lithium-sulfur batteries to identify performance bottlenecks, they said in an abstract for a paper on their work published in the journal Chem.

Researchers already knew that energy discharge in these devices is “complicated due to various reactions in multiple phases and the tortuosity of the highly porous carbon matrix,” they acknowledged in the abstract. Their approach to examining these mechanisms, then, was to take simultaneous measurements of small-angle and wide-angle scattering and cell resistance while lithium-sulfur cells were in operation.

What they found is that precipitates grow mostly in number, not in size and that the structure of the carbon matrix is not affected by this growth, researchers reported. “The comparison of the small-angle and wide-angle scattering reveals the amorphous discharge products found at a low discharge rate,” they wrote in the abstract.

Researchers also discovered a potential correlation between the diffusion resistance and the compositional change of electrolyte in the mesopores at the end of discharge, they said. This suggests that lithium-ion deficiency “is the limiting factor for sulfur utilization at a medium discharge rate,” researchers wrote.

These findings pave the way for novel designs of lithium-sulfur batteries that can solve the material bottlenecks and develop devices on par with current lithium-ion designs in terms of energy flow, cycling, and overall lifespan, researchers said.

“Learning about problems allows us to develop new strategies and materials to improve battery performance,” Brandell said in a press statement.