Investigating the Nature of the Solid Electrolyte Interphase 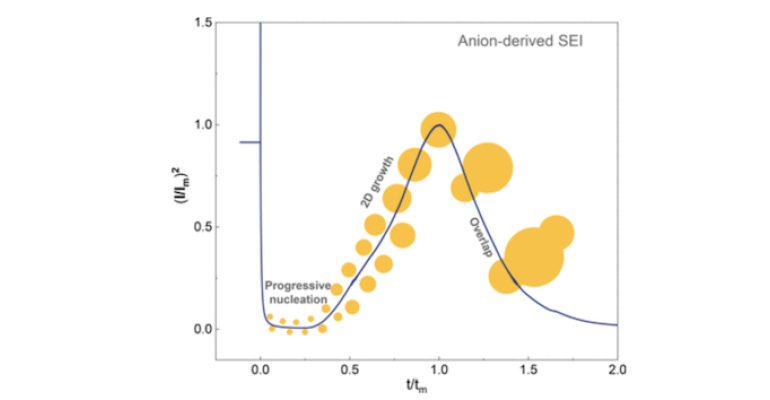 Development of lithium-ion batteries requires a scientific understanding of electrochemistry, including the formation of the solid electrolyte interphase (SEI).

Lithium-ion batteries have become increasingly important as electrical energy storage for everything from cell phones and laptop computers, to electric vehicles (EVs), to large-scale power grid systems. This has led to significant efforts to understand the basic science and mechanisms by which the electrochemical reactions occur within the battery cells. One area of interest is the formation of the solid electrolyte interphase (SEI) that forms on the surface of the anode (negative electrode) during charging.

Lithium-ion batteries consist of a positive electrode (cathode) which is usually made from a combination of nickel, manganese, and cobalt (or lower energy LFP cells made from iron and phosphorous), and a negative electrode (anode) which is made from carbon graphite sheets. Between the anode and cathode is a liquid electrolyte made up of organic solvents that allows the free transfer of lithium ions between the cathode and anode when the battery is charged or discharged.

During charging, lithium ions travel from the cathode to the anode, where they are inserted between the layers of the graphite anode in a process called intercalation. During discharging, the lithium ions are extracted from the anode and travel through the electrolyte to the cathode where they diffuse into spaces that exist in the cathode material’s crystal structure.

Except it isn’t quite that simple. It turns out that at the beginning of the charging process for a lithium-ion battery, elements from the electrolyte deposit onto the graphite anode and form a coating called the solid electrolyte interphase (SEI) that quickly covers the entire electrode. It is only after this SEI layer is complete that the positive lithium ions can begin to intercalate into the graphite electrode.

A team at Tsinghua University in Beijing, China is having a closer look at the nucleation and growth of the SEI on the graphite anode surface. The liquid electrolyte consists of lithium salts and organic solvents. The term solvation describes the interaction of the solvent with dissolved molecules, which can be uncharged or ionized. During the process of solvation, ions are surrounded by a concentric shell made up of the solvent molecules.

The team found that the solvation shell around the lithium ions must be stripped off in order to allow SEI formation and growth. They determined that the anions of the solvation shell first needed to be adsorbed on the fresh anode and that it then took up two electrons in an electrochemical reaction. This then triggered decomposition and nucleation of the SEI. The researchers concluded, “…that SEI formation mainly depended on how easily the anions can grab electrons and decompose compared with the solvent.”

To investigate crystal growth of the SEI the researchers used atomic force microscopy and found that a smooth SEI layer only formed when the cell was subjected to low overpotentials (less than the theoretically determined voltage for the cell). The nature of the electrolyte solvent influenced the overpotential—those having a high affinity to the SEI crystalline layer exhibited no overpotential.

According to a news release from Wiley Online Library, the researchers concluded,  “…that future designs of high-performance electrodes should focus more on the interplay between the negative ions of the lithium salt and the solvent.” They found the anions should outcompete the solvent to allow the formation of a homogeneous inorganic SEI layer to form. In other words, the anions needed to more easily adsorb to the electrode surface and undertake electrochemical reactions to create an optimal SEI layer. In turn, the end result could be batteries that charge and discharge more quickly and exhibit a longer cycle life—advantages that will be useful for every lithium-ion battery application.