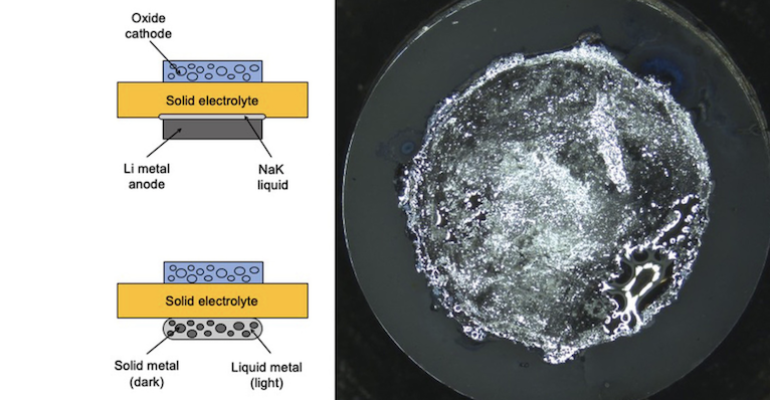 Placing a layer of liquid metal between the lithium anode and a solid electrolyte shows improvements in the charging of solid-state batteries.

Anyone who has been paying attention to the development of solid-state lithium metal batteries will know that the challenges come during charging. The anode (negative electrode) in these batteries is comprised of a thin foil of lithium metal which provides dramatically more lithium ions than the graphite anode used in a lithium-ion battery and thus produces much higher energy densities. The problem is that during charging lithium crystals plate onto the lithium metal surface in spikey, needle-like dendrites. The dendrites can grow large enough to short out the battery, potentially causing a fire.

The solid-state part of the battery comes from the solid polymer or ceramic electrolyte material that is used to help suppress the growth of the lithium dendrite crystals. This has been partially successful, but dendrite formation still plagues the design. One requirement for future electric vehicles (EVs) is fast DC charging. Unfortunately, dendrites form more rapidly with higher charging currents and thus far the problem has largely prevented the large-scale commercialization of a practical solid-state lithium battery.

The payoff in battery performance could be huge, so researchers around the world are hard at work on the problem. One group made up of scientists from MIT, Texas A&M University, Brown University, and Carnegie Mellon University have recently studied the use of a thin film of liquid metallic electrode material on the surface of the lithium metal anode.

The team was inspired in their approach by experiments with high-temperature batteries that use molten metal electrodes. These batteries operate at temperatures of several hundred degrees so are not practical for portable battery-operated devices or EVs. Yet, they can be charged at high current levels without the formation of harmful dendrites. “The motivation here was to develop electrodes that are based on carefully selected alloys in order to introduce a liquid phase that can serve as a self-healing component of the metal electrode,” said MIT graduate student Richard Park, in an MIT news release.

To provide a similar liquid-solid interface, the team developed a semisolid electrode that sits between the lithium metal of the anode and the solid electrolyte material. It provides a self-healing surface layer at the interface and also helps prevent tiny cracks in the brittle electrolyte surface that can provide sites for dendrite growth. The material is a mixture of sodium and potassium and is described as similar in consistency to “the amalgam dentists use to fill a cavity—solid metal, but still able to flow and be shaped.”

According to the news release, the team was able to run the system with the liquid metal interface at 20 times greater current than when solid lithium metal was used without forming any dendrites.

The team thinks that its new approach could be adapted to different versions and architectures of solid-state lithium batteries. One of the researchers, Venkatasubramanian Viswanathan, professor of mechanical engineering at Carnegie Mellon University, said, “We think we can translate this approach to really any solid-state lithium-ion battery. We think it could be used immediately in cell development for a wide range of applications, from handheld devices to electric vehicles to electric aviation.”

It is too soon to tell whether the layer of liquid metal between the lithium metal anode and a solid electrolyte is a breakthrough or just one more step in the long progression to solid-state lithium batteries. By focusing on the properties of the metal electrode, instead of just the nature of the solid electrolyte, it is possible that this research may inspire further innovation.