Might it be Viable to Make Lithium-Free Batteries Using Organic Redox Polymers? 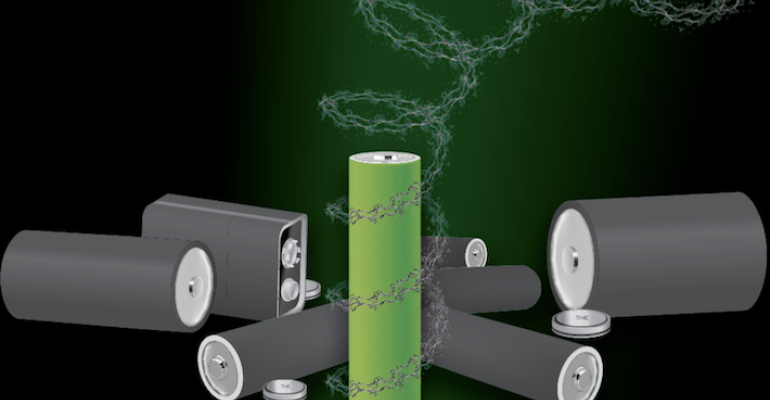 Easy to recycle metal-free batteries are a possible outcome from research into organic cathodes and anodes.

By now it’s clear that much of the future of electrochemical storage of electricity will take place using lithium-ion batteries. They can store adequate amounts of electrical energy to power a cell phone, laptop, electric vehicle (EV), or power grid and can be manufactured in a cost-effective way. The downside is the materials from which they are made: metallic elements such as lithium, cobalt, and nickel are not inexpensive, and when they are bound together into a battery they are not easy to separate for recycling.

Related: Ever Thought About the Parts of a Lithium-Ion Battery? Here, we do it for you

What if you could make a battery out of completely organic compounds—ones that were easy to synthesize and at the end of their life could be easily broken apart, degradable in addition to being recyclable? That’s the idea behind a recyclable polypeptide battery under development by a team at Texas A&M University.

"By moving away from lithium and working with these polypeptides, which are components of proteins, it really takes us into this realm of not only avoiding the need for mining precious metals but opening opportunities to power wearable or implantable electronic devices and also to easily recycle the new batteries," said Dr. Karen Wooley, distinguished professor in the Department of Chemistry in a University news release. "They [polypeptide batteries] are degradable, they are recyclable, they are non-toxic and they are safer across the board."

The key to an all-polypeptide organic radical battery is that is composed of reduction-oxidation(redox) active amino-acid macromolecules that can hold and release electrons during charging and discharging.

The Texas A&M team made battery electrodes using composites of carbon black and polypeptides that contain either viologen or 2,2,6,6-tetramethylpiperidine 1-oxyl (TEMPO). Viologens are relatively inexpensive organic compounds that have highly reversible redox reactions. The viologens were attached to a matrix used for the battery anode. A TEMPO-containing polypeptide was used for the cathode.

Because both viologens and TEMPO are active redox molecules, they act as the charge-storage centers, surrounded by insulating barriers formed by linkage and surface groups. Electrons were found to tunnel through the barrier during oxidation and reduction processes. The team measured the potential window between the anode and cathode in their devices to be about 1.5 volts. Although this is low, it is sufficient for applications (such as biosensors) that require little energy.

The polypeptide organic radical battery also can aid in the issues of battery recyclability. The components can be degraded on demand in acidic conditions, breaking down into amino acids and other degradation products.  Isolation and separation of these degradation products may present challenges for recycling and will need to be further addressed.

Redox-active polymers can also charge much faster than commercially available lithium-ion batteries, so batteries made from polymers have the potential to charge within minutes rather than hours, noted Wooley.

Polypeptide organic radical batteries are only in their beginning stages and further work is needed in the study of the optimization of materials and the structure of the electrodes. Applications in large-scale flow batteries for grid storage also could become a viable application for the technology.

Spent Lithium-Ion Batteries can Give Up Cobalt Without Crushing or Melting
May 13, 2021

Electric Vehicles Could Operate on Cheap Batteries Made with Salt
May 03, 2021