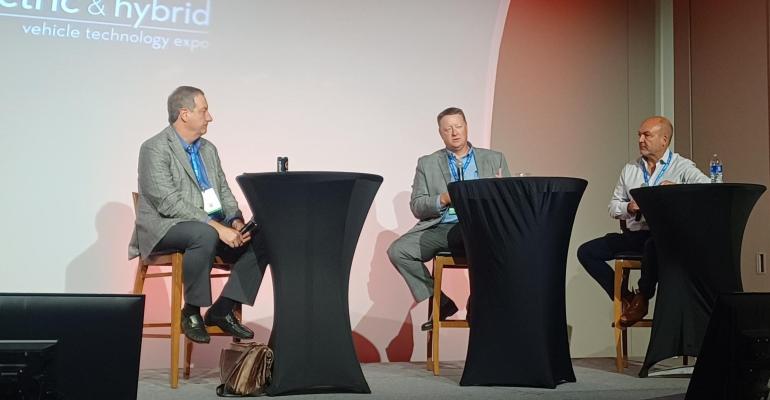 Panelists at a session on raw materials availability and pricing during the Battery Show discuss efforts to increase supplies of key minerals such as nickel and cobalt.
Battery Show panelists discuss initiatives to source more nickel and cobalt to meet increasing future battery needs.

Supply-chain issues have dominated the discussion at this year’s Battery Show in Novi, MI, and one of those issues has been the problem of obtaining sufficient minerals, such as nickel and cobalt, to meet the robust demand for electric vehicles and other battery applications. At a panel session Tuesday afternoon titled "Raw Materials Availability, Costs, and Pricing," several panelists on the frontlines of refining these minerals hashed out some of the current supply challenges.

Ken Hoffman, Co-Head of EV Battery Materials Research at McKinsey & Company, dispelled any thoughts that recycling efforts would make an appreciable impact on resolving current materials shortages. “The only way to get the electric vehicle battery train rolling is to refine more raw materials, such as nickel.”

The sourcing of battery raw materials will only get more critical, as the recent passage of the Inflation Reduction Act will provide financial incentives for consumers only when the final assembly of the vehicles occurs in North America. Hoffman noted according to the Act, by 2029, all EV batteries must be sourced in North America, which means all  battery components, including materials, will need to be sourced onshore.

Given that a bulk of mineral processing now takes place offshore in countries such as China, the U.S. has a long way to go, according to the panelists. But at last there is some potentially significant work underway.

One panelist, Jon Cherry, President and CEO of PolyMet Mining, said his company will be the first to commercially mine copper, nickel, and precious metals in the Duluth Complex, a massive geological formation near the eastern end of the Mesabi Iron Range that contains some of the world’s largest known undeveloped accumulations of copper, nickel and platinum group metals. The company is undertaking this through the NorthMet project, which will comprise acquiring rights to the mine itself as well as infrastructure including rail, roads, utilities and established supplier networks.

Another panelist, Todd Malan, Chief External Affairs Officer and Head of Climate Strategy for Talon Metals, said his firm is developing Tamarack Mine, which is located west of Duluth, MN. The project which would provide a source of nickel-copper-cobalt for vehicle batteries. “We have signed an agreement to supply Tesla with nickel concentrate by 2026,” Malan said.

While the panelists acknowledge progress is being made, getting to this stage has not been easy. Acquiring the rights to a mine is a long, arduous process, lasting years, negotiating with agencies on various governmental levels. And, there is sometimes the need to steer through litigation, as special interests such as environmental groups more than likely than not will contest mining activities because of potential environmental impacts on land and wildlife in the affected regions.

Cherry said PolyMet had to settle a number of lawsuits, which worked out in their favor, before getting approval for the NorthMet project. And Malon added that the Eagle Mine project took over five years to develop and cost hundreds of millions of dollars.

Government initiatives to bring the mining of nickel and other minerals for batteries will help materials companies, the panelists acknowledged. So does the fact that offshore minerals sources are not necessarily ideal for batteries.

“Many new nickel mines come out of Indonesia,” noted McKinsey’s Ken Hoffman. “But these minerals have high iron content which must be leeched out, which is very expensive and troublesome to do.”

“You have to adopt a partnership mentality,” said Talon Metals’ Malon. “It (nickel) is not a commodity product where you can bargain relentlessly on price.”