Up Next, Electric Aviation: NASA's Solution Is a Solid-State Lithium Battery 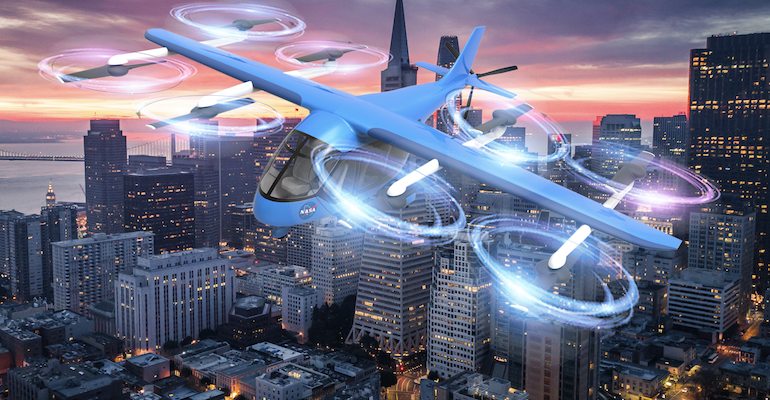 NASA gets involved in the development of a solid-state lithium metal battery for aviation.

Lithium-ion batteries have become ubiquitous in everything from cell phones and personal electronics to renewable energy power storage. It is electric vehicles (EVs) however that has become their defining application. The performance, cost, manufacturability, and safety of a present-day commercial lithium-ion battery, while not perfect, can meet the needs of ground-based electrified transportation quite well. But what about aviation?

There is growing interest in using batteries to partially or fully power electric propulsion systems on aircraft of almost every configuration—from package delivery drones to full-scale passenger aviation.  It’s a question that NASA is asking with an activity called SABERS, or “Solid-state Architecture Batteries for Enhanced Rechargeability and Safety,” to research how to create a safer battery by using brand-new materials and novel construction methods.

“Instead of taking a battery off the shelf, we determined we needed to develop a battery from scratch that would be tailored to the unique performance requirements of an electric aircraft,” said Rocco Viggiano, lead SABERS researcher at NASA’s Glenn Research Center in Cleveland, in a NASA news release.

Not surprisingly, the NASA team has turned to a solid-state battery design that uses lithium metal as its anode. Solid-state batteries have become a sort of holy grail of the battery industry as replacing the traditional carbon graphite anode (negative electrode) with a thin foil of metallic lithium can increase the battery cell’s energy density by three to five times.

A problem occurs however when typical liquid electrolytes are employed. During charging, as lithium ions travel from the cathode (positive electrode) through the electrolyte, they can deposit non-uniformly onto the lithium metal anode, forming needle-like crystals called dendrites. These dendrites can grow large enough to short out the battery cell and potentially causing a fire. To suppress the growth of dendrites, the liquid electrolyte can be replaced with a solid made from either a polymer or ceramic material.

Beyond a lithium metal anode and solid-state electrolyte, NASA is looking at a unique combination of the elements sulfur and selenium to hold an electric charge. “A solid-state sulfur-selenium battery is cool to the touch and doesn’t catch fire. It has a slimmer profile than lithium-ion batteries and has better energy storage. It can take a beating and still operate, often in less than ideal conditions,” Viggiano said.

Sulfur is an Earth-abundant material and is a byproduct of oil refining, so there are stockpiles of the element worldwide that are easily and cheaply accessible. The project seeks to use elements that have never been combined before to form a battery. A NASA-developed component called “holey graphene” (named for the holes in its surface to allow air to pass through), has a very high level of electrical conductivity. It is ultra-lightweight and environmentally friendly. “This material has never been used in battery systems, and we are combining it with other materials that have never been used,” Viggiano said.

One limiting factor with solid-state batteries is their low discharge rate, which can limit the amount of power available over short periods of time, when taking off, for example. The SABERS researchers have almost doubled the discharge rate with their sulfur-selenium cathode, meaning that solid-state batteries could feasibly power larger electronics. “We exceeded our goal. With more development, we can improve that rate even further,” Viggiano said.

The next step will include testing how it works in practical situations, making sure it’s safe, and gathering data on its performance. If successful, the design could be optimized even further, based on SABERS focus on the five considerations needed for electrified aviation: safety, energy density, discharge rate, package design, and scalability.

To get off the ground, batteries need to be safe above all else. In addition, they need to hold an enormous amount of power and return that power efficiently. To be packaged effectively within an airframe they should also have a slim and compact shape and relatively low weight.

Almost all lithium-ion and solid-state lithium battery research is presently oriented toward the auto industry—an industry whose safety standards, while commendably high, are generally less restrictive than those required for aviation applications where the batteries encounter environments that are more stressful and the consequences of failure more catastrophic. SABERS has the goal of setting new, higher standards for battery use in aviation by proving that making safer batteries is both technically feasible and economically lucrative.