The Next Lithium Metal Batteries Work Better With Liquid Electrolyte 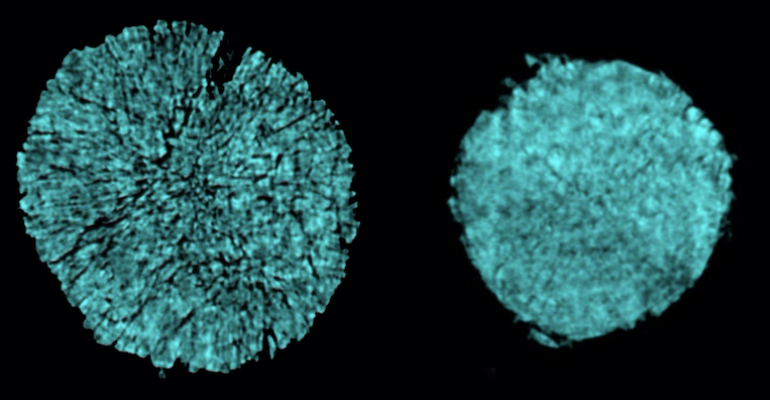 X-ray tomography images were taken at Brookhaven National Lab show cracking of a particle in one electrode of a battery cell that used a conventional electrolyte (as seen on the left). The researchers found that using a novel electrolyte prevented most of this cracking (right).
Researchers at MIT are working with new liquid electrolytes that may allow lithium metal batteries to be made without using solid-state electrolytes.

Conventional graphite anodes (negative electrodes) used in lithium-ion batteries are a limiting factor in energy density. During charging, lithium ions are placed into the layers of the graphite in a process called intercalation. When the battery is discharged, the lithium ions travel out of the graphite anode, through the electrolyte, and into the cathode material, which is often made from a combination of nickel, manganese, and cobalt.

Graphite can only store a limited amount of lithium ions, which in turn limits the amount of charge that can be stored. One solution is to replace the graphite with a strip of lithium metal, which can hold and produce vastly larger numbers of lithium ions when the battery is discharged.

The problem comes during charging, however, as lithium metal plates in an uneven manner onto the surface of the lithium metal anode. This can create spikey, needle-like crystals of lithium called dendrites. The dendrites can grow large enough to reach that cathode and short out the battery, potentially causing a fire.

Researchers are trying to find ways to suppress the formation of dendrites when lithium metal is used as an anode. One way is to replace the liquid electrolyte of a lithium-ion battery with a solid material made from either a polymer or a ceramic. These so-called solid-state batteries are showing promise, delivering 3-5 times the energy density of a commercial lithium-ion battery while also not forming harmful dendrites. Manufacturing solid-state batteries may present problems, as specialized equipment can be required to handle both the lithium metal anode and the solid electrolyte materials.

Try to solve this problem has lead researchers at MIT to examine new types of liquid electrolytes for use with lithium metal anodes—electrolytes that were developed several years ago during MIT research into lithium-air batteries. “There’s still really nothing that allows a good rechargeable lithium-air battery,” said Jeremiah Johnson, Professor of Chemistry in an MIT news release. “We designed these organic molecules that we hoped might confer stability, compared to the existing liquid electrolytes that are used,” he added.

Three different sulfonamide-based formulations which were quite resistant to oxidation and other degradation effects had been developed. Recently, an MIT team led by Professor Ju Li decided to try these novel electrolytes in batteries with standard nickel-based lithium-ion cathodes and lithium metal anodes.

“The electrolyte is chemically resistant against oxidation of high-energy nickel-rich materials, preventing particle fracture and stabilizing the positive electrode during cycling,” said Shao-Horn, a professor of mechanical engineering and materials science and engineering. The nickel cathode material expands and contracts anisotropically as it charges and discharges, leading to cracking and a breakdown in performance when used with conventional electrolytes. Li said it was, “…sort of shocking to see that, if you just change the electrolyte, then all these cracks are gone.”

The electrolyte also allows lithium ions to pass through it — an essential mechanism by which batteries get charged and discharged — while at the same time blocking the other cations, known as transition metals, from entering the electrolyte.

The next step is to find ways to make the new electrolyte affordable. “We make it in one very easy reaction from readily available commercial starting materials,” Johnson says. At present the precursor compound used to synthesize the electrolyte is expensive, but he says,  “I think if we can show the world that this is a great electrolyte for consumer electronics, the motivation to further scale up will help to drive the price down.”

Because this new liquid electrolyte is a “drop-in” replacement for an existing lithium-ion electrolyte and essentially only needs a new lithium metal anode, it doesn’t require a redesign of the entire battery system, according to Li, and it could be implemented quickly and could be commercialized within a couple of years. “There’s no expensive elements, it’s just carbon and fluorine. So, it’s not limited by resources, it’s just the process,” he said.