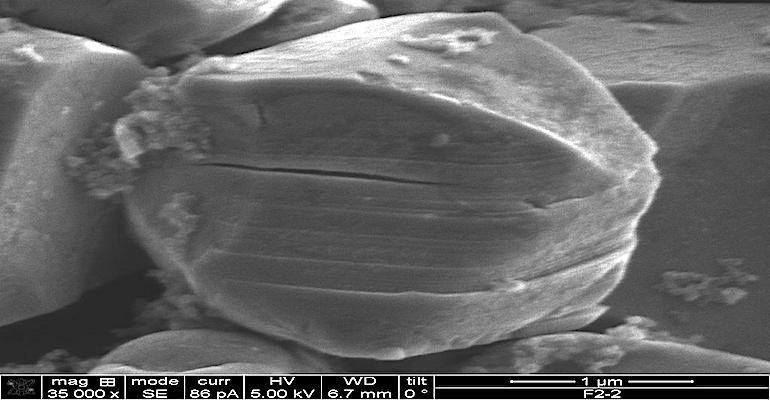 The goals for lithium-ion battery researchers around the world are fairly clear. To make batteries that can safely deliver more energy, that last longer, and that is less expensive to produce. Recall, that while a lithium-ion cell is discharging, lithium ions are extracted from the anode, travel through the electrolyte, and are inserted into the structure of the cathode in a process called intercalation. When the cell is recharged, lithium ions are extracted from the cathode and inserted back into the anode. The anode is typically made up of sheets of a carbon graphite material, while the cathode is made up of a metal oxide material.

The constant insertion and extraction of the lithium-ion into the cathode strains the structure and eventually takes its toll, limiting how long a battery lasts and requires materials considerations that affect its size and cost.

The make-up of the cathode is under intense scrutiny in an effort to reduce both cost and increase storage capacity. The highest energy commercially available lithium-ion batteries use a nickel-based cathode that also includes elements like cobalt and aluminum (NCA) or manganese (NCM) to help maintain the structural integrity of the mostly nickel cathode during discharging and charging. Cobalt is particularly effective at stabilizing a nickel oxide cathode structure but has three strikes against it: It is expensive, it is relatively scarce, and it is primarily mined in the Democratic Republic of the Congo in a region of the world that is politically unstable. The push, therefore, is to find a way to reduce or eliminate cobalt from lithium-ion battery cathodes.

Nickel in a cathode of commercial lithium-ion batteries is found in the form of polycrystals, which are aggregates of many nanocrystals combined into one larger particle. Although polycrystals have a large surface area and have advantages for storing and discharging lithium ions quickly, they sometimes break down during repeated cycling. This can allow a large amount of the cathode surface area to be exposed to the electrolyte, which accelerates undesirable chemical reactions and generating potentially harmful amounts of oxygen gas. This damage that results is irreversible and a battery with a nickel-rich cathode fails faster and has safety concerns.

Because the aggregate of nano-crystals is vulnerable to this damage, scientists at the U.S. Department of Energy’s Pacific Northwest National Laboratory (PNNL) are working on cathodes made up of a single-crystal, nickel-rich cathode.

Single crystals historically have a problem with the formation of microcracks that are created as the battery charges and discharges and the lithium ions depart and return to the cathode, straining the crystal ever so slightly each time. Over many cycles, this results in microcracks in the structure and a breakdown of the cathode. The PNNL team calls this process “crystal gliding”, which occurs as a crystal begins to break apart, leading to microcracks. The PNNL team found however that the gliding damage is partially reversible under certain conditions and have found ways that it can be avoided altogether.

According to a release from PNNL, the research team has learned that the process can be partially reversed through the actions of the lithium atoms, which “create stresses in one direction when the ions enter the crystal lattice and in the opposite direction when they leave.” But the team found that the two actions don’t completely cancel each other out, and over time, microcracks will occur, causing single crystals to ultimately fail.

“With the new fundamental understanding, we will be able to prevent the gliding and microcracks in the single crystal. This is unlike the damage in the polycrystalline form, where the particles are pulverized in a process that is not reversible,” said Jie Xiao, the group leader of PNNL’s battery research program.

There are several strategies that the PNNL team is pursuing to prevent crystal gliding. Operating the battery at a common voltage of around 4.2 volts, for example, minimizes damage. This voltage is within the normal range of usage and is safe for lithium-ion batteries used in electric vehicles. According to the release, “The team also predicts that keeping the size of a single crystal below 3.5 microns may avoid damage even at higher voltages. And the team is exploring ways to stabilize the crystal lattice to better accommodate the arrival and departure of lithium ions.”

When it’s all said and done, the PNNL team estimates that a single-crystal, nickel cathode will be able to deliver at least 25 percent more energy compared to the cobalt-containing lithium-ion batteries used in today’s electric vehicles. To get there PNNL researchers are working with leading lithium materials producers Albemarle Corporation, in a collaboration funded by DOE, to “research the impacts of advanced lithium salts on the performance of single-crystal nickel-rich cathode materials by demonstrating the process at kilogram scale.”