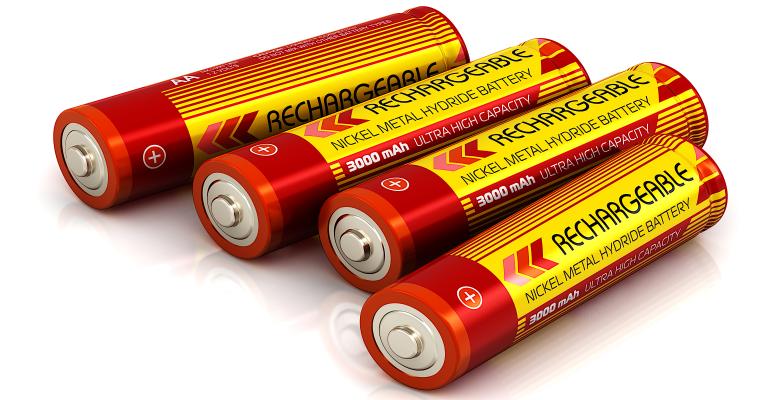 Rechargeable nickel-metal hydride batteries are available in a variety of configurations that can be used to power portable electronic devices.
Before lithium, Nickel Metal Hydride (NiMH) was the EV and hybrid vehicle battery of choice.

Observers in the battery space can be excused for obsessing over lithium-ion battery chemistries. The technology has proven itself in everything from hand-held electronic devices, to electric vehicles (EVs), to large-scale grid storage. But before lithium-ion batteries became so ubiquitous, there was another chemistry, called nickel metal hydride (NiMH) that dominated the battery scene.

The development of rechargeable NiMH batteries began after their discovery in 1967 and was largely sponsored by Daimler-Benz and Volkswagen AG. In the early 1970s, a nickel battery using high-pressure hydrogen was developed to power spacecraft and was used successfully on a number of satellites, including the Hubble Space Telescope.

The NiMH battery grew from a desire to replace the rechargeable nickel cadmium (NiCd) battery that had been developed in 1899. By the 1960s and 1970s, NiCds had become the power source of choice for handheld radios, portable electronics, cordless power tools, and particularly photography. NiCds have particularly low internal resistance, allowing them to supply high surge currents for short periods of time. By 2000, more than 1.5 billion NiCd batteries were produced each year.

It wasn’t all rosy, however. Cadmium is a heavy metal, and environmental hazard that is highly toxic to most life forms, particularly when the batteries were accumulating in landfills. NiCd batteries also exhibited a memory effect—their performance was dependent upon the previous charge and discharge cycles, reducing the ability of the battery to return the full amount of electrical energy stored within it.

Enter the NiMH battery. Compared to the NiCds, NiMH batteries have a higher capacity, are less toxic, and are less expensive. The negative electrode (anode) of a NiMH cell contains an intermetallic compound that can accept an electron during charging and return it during discharging. The intermetallic compound is typically a mixture of a rare earth element, such as lanthanum, cerium, neodymium, or praseodymium, with nickel, cobalt, manganese, or aluminum. NiMH batteries produce 40% higher specific energy than NiCd batteries but can exhibit 20% self-discharge in the first 24 hours, and a subsequent 10% self-discharge per month. This limits their usefulness where they need to sit for long periods before use.

NiMH batteries are much lighter than lead-acid batteries, and in the early 2000s, when EVs and hybrid vehicles were of sudden interest to automakers, larger format cells were developed. The NiMH chemistry wasn’t particularly good at storing large amounts of energy, as would be needed for a battery EV, but because of their low internal resistance they were very good at providing bursts of energy during acceleration, and taking in electrical energy during regenerative braking—characteristics needed for a hybrid.  Every hybrid vehicle produced during that time used NiMH batteries, most notably the Toyota Prius. From 2000, onward more than 7 million Prius models have been built using NiMH battery packs, although the plug-in version of the Prius, which came available in 2012, uses a lithium-ion battery pack.

Because of the intensive development taking place with lithium-ion EV batteries, they are also becoming significantly cheaper than most other solutions, including NiMH. One area where NiMH does provide an advantage is safety. Lithium-ion batteries use a flammable liquid electrolyte and can exhibit thermal runaway under certain conditions. NiMH batteries are considered safer in that regard and can also be fully discharged without damage—unlike lithium-ion batteries that must retain a state of charge above about 20% to prevent damage.

Although lithium-ion has advantages, NiMH batteries are still viable for a variety of portable electronic devices and continue to be used in some hybrid vehicles. Because lithium-ion batteries operate at higher cell voltages than NiMH cells, they are not a simple drop-in replacement, and devices need to be redesigned to accept lithium-ion cells, and that takes time. The battery chemistry also remains the subject of battery researchers and in 2018, Researchers at Stockholm University reported they have developed a thin protective layer on the metal hydride surface structures to extend cycle life.

Another application that is under development is the use of NiMH batteries for grid-scale storage of renewable energy and backup power. As with a hybrid vehicle, the advantage of the NiMH battery is its ability to bring take in and put out electrical energy quickly, which could react to electricity grid needs quickly. It is also claimed that their production is less energy-intensive than lithium-ion.

As with all battery chemistries, NiMH won’t be going away any time soon. Even NiCd batteries have a niche and are still manufactured in small numbers, and the financial incentives of maintaining a product that still provides some advantages over its competitors mean NiMH will be around for a long time to come.