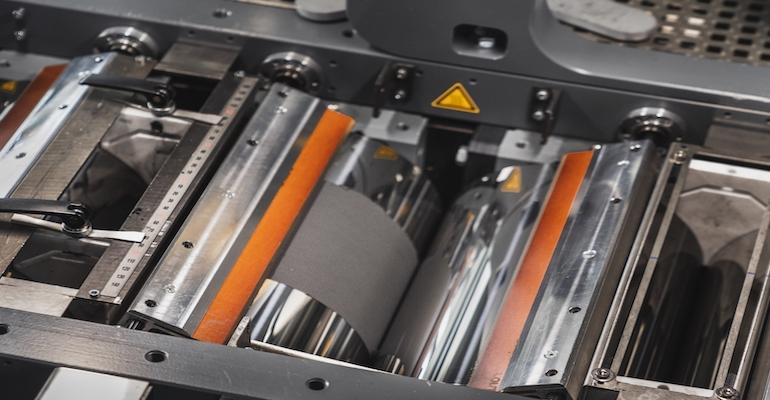 A fine coating film forms on the faster-rotating roller
Lithium-ion batteries can be made using a novel dry-processed anode technique that saves cost and reduces energy needs.

The process used to apply the coating to the metal foil is energy-intensive. “The conventional coating process uses a wet chemical method that applies what is known as slurry,” said Dr. Benjamin Schumm, Group Manager for Chemical Coating Technologies at Fraunhofer IWS in a company news release. The active material, conductive carbon and binders are dispersed in a solvent to make a kind of paste, which is initially applied to the metal foil to form a wet coating. “Extremely large machines with very long drying tracks are needed to ensure that the solvent will evaporate afterward,” said Schumm. But Fraunhofer has devised a process that uses much less energy.

The new coating process essentially uses similar raw materials as in the slurry process. According to the company, the dry coating technology works without solvents but instead uses a special binder. The materials form a dry mixture that is fed into a calender gap — a gap between two rollers rotating in opposite directions. Fraunhofer determined that the crucial detail is that one of the rollers must be turning faster than the other, inducing a shear force, which ensures that the binder forms thread-like networks known as fibrils.

“Imagine it as a spider’s web that mechanically embeds the particles,” said Schumm. The pressure and motion form a fine film on the faster-rotating roller. This film is then transferred in a second calender gap onto a current collector foil allowing both sides to be coated simultaneously without significant additional work. The resulting coil is then cut to the required size and the parts are stacked as appropriate to produce the finished battery cell.

The technology, that Fraunhofer is calling DRYtraec is environmentally friendly and cost-effective and can be used on a large scale, giving it the potential to revolutionize the manufacturing of battery electrodes. Removing toxic solvents and long, energy-intensive drying machines from the process also provides significant benefits to the environment and reduces the carbon emissions associated with the process. Fraunhofer also claims that the new process also accelerates production and requires only one-third of the equipment space of a conventional solution, resulting in significant cost savings.

The prototype DRYtraec systems were part of a demonstration project that showed it is possible to manufacture electrodes continuously, regardless of the type of battery: “The range of possible uses for the technology is not limited to a particular cell chemistry,” Schumm said. “It could equally be used on lithium-ion cells as on lithium-sulfur or sodium-ion cells. We are even looking at solid-state batteries. These will be increasingly important in the future, but the materials cannot tolerate wet chemical processing. Thus, DRYtraec allows us to offer a very promising solution to this problem.”