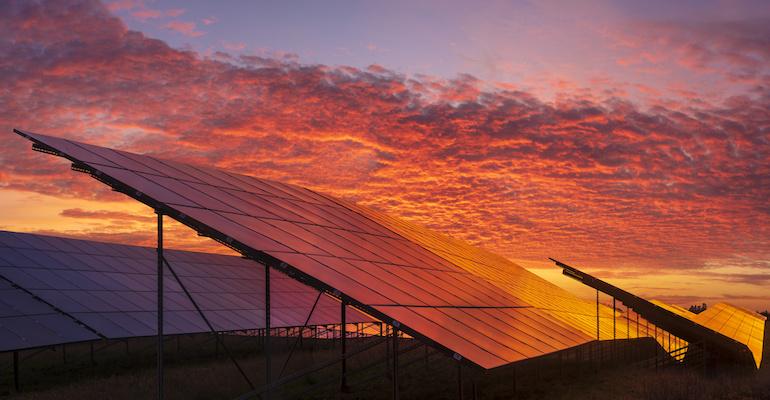 Researchers use a combination of gold film and chromium to boost efficiency in a device that can be paired with traditional silicon-based technology for novel uses.

A team of researchers at Penn State University developed the ultrathin metal electrode for semi-transparent perovskite solar cells, which then can be coupled with traditional silicon cells to boost the performance of both devices, they said.

The invention is a key advancement toward the broad-scale installation of tandem solar cells not only in traditional applications but also in windows in residential homes and offices to create more sustainable forms of energy delivery, something researchers have been working toward for years.

“This is a big step--we finally succeeded in making efficient, semitransparent solar cells,” observed Kai Wang, assistant research professor of materials science and engineering at Penn State and a collaborator on the research.

Related: Will Solar Panels and Electric Yachts and Tankers Rule the Waves?

Key to the invention is a new way to make an ultrathin gold film—which historically has shown promise as a transparent electrode in perovskite solar cells—more conductive, researchers explained. In previous research, scientists struggled to create a uniform later of the material for the electrode, resulting in poor conductivity, they said.

“Normally, if you grow a thin layer of something like gold, the nanoparticles will couple together and gather like small islands,” explained Dong Yang, assistant research professor of materials science and engineering at Penn State, in a press statement.

To solve this problem, researchers used chromium as a base layer, which enabled the gold to form on top in a continuous, ultrathin layer without previous conductive deficiencies, he said.

“Chromium has a large surface energy that provides a good place for the gold to grow on top of, and it actually allows the gold to form a continuous thin film,” Yang explained.

Though most solar cells currently used are made from silicon, scientists have been exploring the use of perovskite materials—a broad class of crystalline materials

—as a way to push the limits of current technology by pairing them with traditional cells to create more efficient tandem devices.

A 5 percent improvement in efficiency is significant, representing about 50 watts more sunlight for every square meter of solar cell material, researchers said. In solar farms with thousands of modules, this can add up to a substantial amount of electricity, they said.

Researchers said their technology demonstrates that tandem perovskite-silicon cells can be used not only in traditional solar-farm arrays but that the introduction of a new transparent component furthers their application for uses in sustainable buildings and other applications.

“This breakthrough in the design of tandem cell architecture based on a transparent electrode offers an efficient route toward the transition to perovskite and tandem solar cells,” Yang said in a press statement

Might it be Viable to Make Lithium-Free Batteries Using Organic Redox Polymers?
May 18, 2021