Images courtesy of Nano One 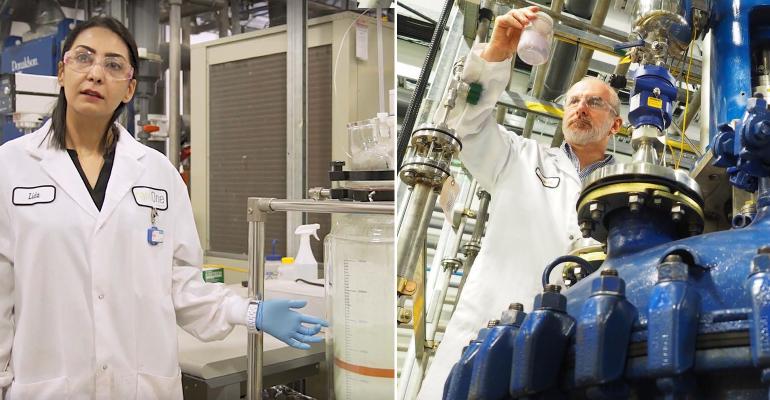 Leaders around the world are promoting the adoption of electric vehicles to thwart climate change. However, the manufacturing of batteries that power EVs use materials and manufacturing processes that have a significant impact on the environment, which has led scientists to try to find and adopt new technologies to create more sustainable solutions.

Nano One has been part of the search. The Canada-based company’s aim is to improve the cost and performance of more sustainable cathodes—or negatively charged battery electrodes—for use in lithium-ion batteries.

Nano One’s core mission is to establish its technology as a leading platform for the global production of a new generation of battery materials, according to the company’s website. The company’s platform (exhibited last week at The Battery Show North America) is a manufacturing technology called the One-Pot Process. This process streamlines the production of novel cathode materials to reduce cost while enabling higher-performance batteries.

In lithium-ion battery technology that’s used ubiquitously today, lithium cycles in and out of the cathode through large clusters of crystals. However, cathodes are prone to other reactions inside the battery that threaten the health and longevity of the device.

Scientists have solved this problem by coating the clustered crystals in cathodes to prevent unwanted reactions. However, this process has added complexity and cost to the overall manufacturing of batteries. Moreover, charging damages coatings over time and then exposes the battery to the side reactions that the coating is meant to prevent.

Cathodes that use single-crystal materials are less prone to this damage, but manufacturing them adds to the cost and complexity of fabrication. Nano One says it solves both issues by forming cathodes with single, nano-sized crystals that are already coated with niobium, combining two processes into one—hence the “one-pot” moniker.

Image courtesy of Nano One 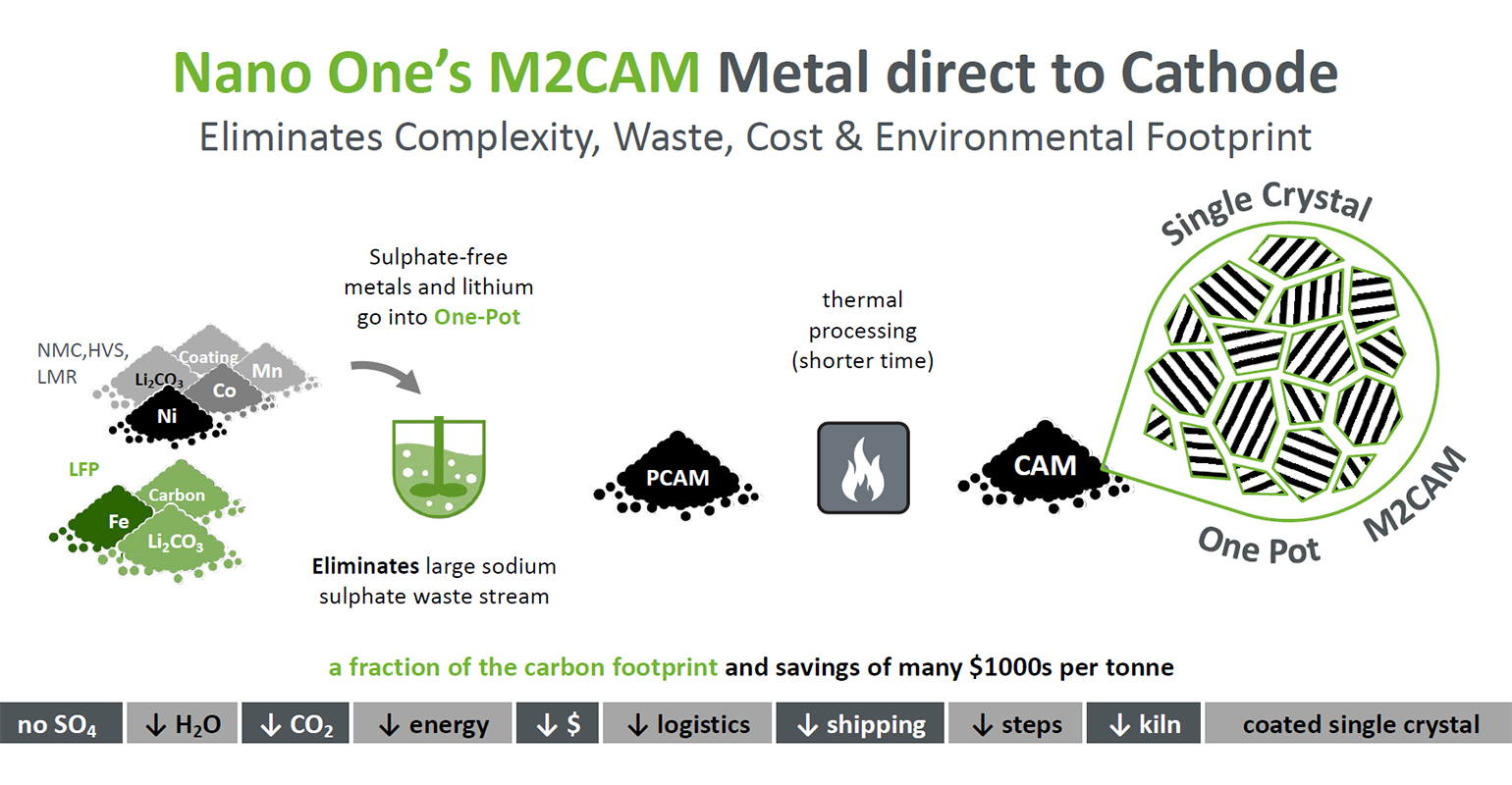 Nano One graphic illustrates how its processes simplify cathode production while reducing waste.

The process mixes lithium with coatings and other metals into a precursor powder. This is then heated in a kiln to transform into coated single nanocrystals without the need for extra steps typical in current cathode-fabrication processes, the company said.

The niobium coating protects the cathode from deleterious side reactions than can otherwise cause rapid performance degradation, according to Nano One. Overall, the One-Pot Process reduces the number of steps and eliminates wasteful byproducts, as well as enables longer-lasting cathodes for better-performing batteries.

Currently there are two types of cathode active materials used in lithium-ion batteries. The most common are lithiated transition metal oxides containing lithium, nickel, manganese, and cobalt, which are known as NMC.

The other active materials, used less widely, are lithium iron phosphate, which contains lithium, iron, and phosphorous, known as LFP. This active material will likely become more widely used because iron has a less costly and less constrained supply chain than the metals used in NMC, and the cathodes that use the material are safe and durable, researchers said.

However, one drawback with LFP-based cathodes is that it they are not as conductive as oxides like NMC—a characteristic that is critical for its function inside a battery. However, scientists solved this issue by coating it with conductive carbon, which has become the standard for this type of cathode, they said.

Researchers believe that NMC cathodes will continue to be the standard for long-range EV applications, while those that use LFP will be better suited to heavier duty, cost-sensitive applications in industry, renewable energy storage, and mass-market low- and mid-range urban vehicles. Nano One asserts that its One-Pot Process is applicable to both types of cathodes.

Nano One is currently in the process of scaling up its platform for commercialization in North America, Europe, and other emerging regions. The company is acquiring Johnson Matthey Battery Materials Canada and announced partnerships with Rio Tinto and BASF. Most recently, the company secured C$1.8 million funding from Sustainable Development Technology Canada (SDTC) and the British Columbia Innovative Clean Energy (BC-ICE) fund toward the fourth and final milestone of the development of the technology.