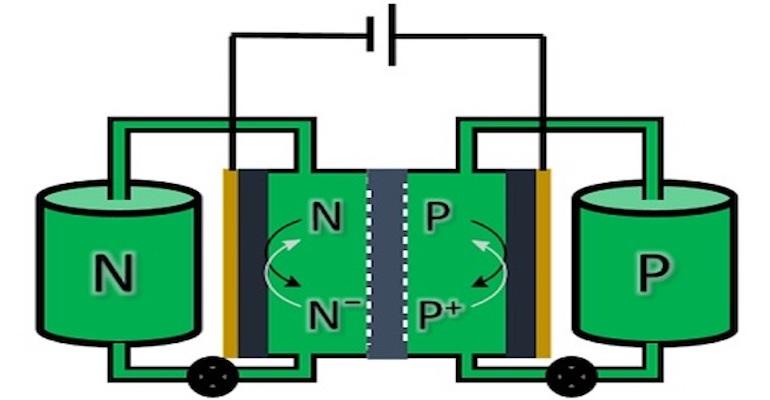 Schematic representation of a redox flow battery. The electrolyte solutions are pumped from storage tanks through an electrochemical cell where charge/discharge takes place
Researchers have developed a new flow battery that stores power in a simple organic compound.

The variability of renewable energy sources like solar and wind requires large-scale storage options to maintain power grid stability. Although large banks of lithium-ion batteries are becoming more popular for such applications, they aren’t the only game in town. Flow batteries, which electrochemically store electricity in a fluid are an increasingly attractive solution.

In a flow battery, electrical energy is stored in two separate fluids with dissolved chemicals for charge storage. Electricity is stored (and later released) by pumping these fluids through an electrochemical cell that contains a membrane through which ions can be exchanged. The energy content of such a battery is scalable by simply using larger storage tanks for the fluids.

The metal that is used for present commercial flow batteries, vanadium, is both relatively rare and expensive. Scientists at the University of Groningen, the Netherlands, have designed a flow battery electrolyte that is based upon a much less expensive organic molecule.

“We wanted a symmetrical battery where both tanks contain the same fluid,” said Edwin Otten, Associate Professor of Molecular Inorganic Chemistry in a university news release. “Also, we wanted it to be based on an organic molecule rather than on a metal.” Both sides of the flow battery generally hold fluids with a different composition. Symmetrical batteries have been designed by linking the molecules that are used on both sides together and filling both tanks with the resulting hybrid molecule. “The drawback of this approach is that only one part of the molecule is used on either side. And, during use, reactive radicals appear that degrade over time. This makes stability a problem.”

According to the news release, Otten and his team used a different approach. They looked for a single molecule that was both stable and that could also accept or donate electrons allowing it to be used on both sides of the battery. The most promising compound was a Blatter radical, a bipolar organic compound that can either accept or donate an electron in a redox reaction.

They tested the compound in a small electrochemical cell. It worked well and remained stable over 275 charge/discharge cycles. “We need to bring this up to thousands of cycles; however, our experiments are a proof of concept. It is possible to make a symmetrical flow battery that has good stability,” said Otten. The team noted that the organic Blatter radical is relatively easy to make and although it is currently not produced in industry, scale-up should be possible.

“Another advantage of our symmetrical design is that it is not a big problem if some of our compound crosses the membrane during use,” said Otten. “This could result in a slightly higher volume in one of the tanks but any imbalance is easily restored by simply reversing the polarity.” During their tests, they have shown that this indeed works as predicted and have noted that other experimental designs of symmetrical batteries were not stable enough to get the number of cycles needed to prove this.

Because most flow cells are designed for water-based fluids, and since water is cheap and not flammable, the team’s next step is to create a water-soluble version of the Blatter radicals. “Ph.D. students in my group are already working on this,” said Otten.  “The crucial test is to see whether our compounds will be stable enough for commercial applications.”

Kevin Clemens is a Senior Editor with Battery Technology

Novel Flow Battery Technology may have Potential to Store Energy for 16 Years
Sep 15, 2021