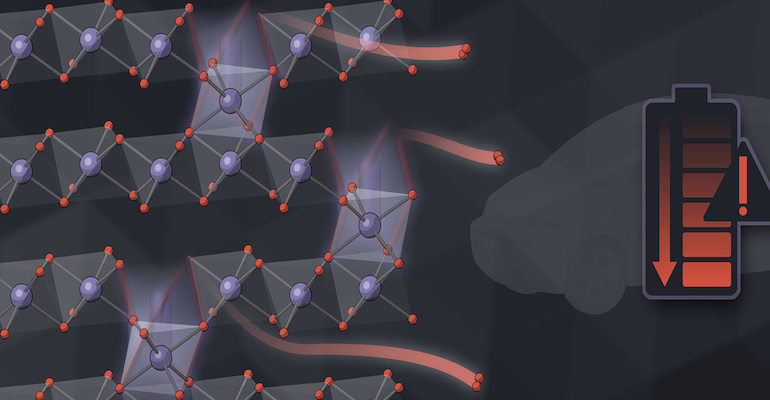 The loss of tiny amounts of oxygen from lithium-ion electrodes results in reduced battery performance over time.

Research into increasing the performance of lithium-ion batteries often requires careful and extremely precise measurements of changes in materials properties. It is well-known for example that when lithium ions flow in and out of a battery electrode during charging and discharging the battery’s voltage fades a small amount— over time these losses accumulate and can eventually decrease the battery’s energy storage capacity by 10-15%.

It has been observed that a tiny bit of oxygen also seeps out during charging and discharging cycles. Researchers at SLAC National Accelerator Laboratory, operated by Stanford University and the US Department of Energy (DOE) have measured this super-slow process in extraordinary detail, showing “how the holes, or vacancies, left by escaping oxygen atoms change the electrode’s structure and chemistry and gradually reduce how much energy it can store.”

The research is described in a SLAC news release. “We were able to measure a very tiny degree of oxygen trickling out, ever so slowly, over hundreds of cycles,” said Peter Csernica, a Stanford Ph.D. student who worked on the experiments with Associate Professor Will Chueh. “The fact that it’s so slow is also what made it hard to detect.”

Lithium-ion batteries work by moving lithium ions back and forth between the cathode (positive electrode) and anode (negative electrode) to temporarily store the electrical charge. Researchers have known for some time that oxygen atoms leak out of the billions of particles that make up each electrode as lithium moves back and forth. Measuring the amount of oxygen lost is difficult. “The total amount of oxygen leakage, over 500 cycles of battery charging and discharging, is 6%,” Csernica said. “That’s not such a small number, but if you try to measure the amount of oxygen that comes out during each cycle, it’s about one one-hundredth of a percent.”

Because it’s so difficult for oxygen atoms to move around in solid materials at the temperatures where batteries operate, the conventional wisdom has been that the oxygen leaks come only from the surfaces of nanoparticles, Chueh said in the news release. The SLAC researchers at how oxygen loss modifies the chemistry and structure of the particles rather than try to measure the oxygen loss directly. They examined the oxygen motion at several length scales – “from the tiniest nanoparticles to clumps of nanoparticles to the full thickness of an electrode.”

In their investigations, the research team “cycled batteries for different amounts of time, took them apart, and sliced the electrode nanoparticles for detailed examination at Lawrence Berkeley National Laboratory’s Advanced Light Source.” A specialized X-ray microscope was used to scan across the samples, making high-resolution images and “probing the chemical makeup of each tiny spot” to reveal nanoscale details, measured in billionths of a meter.

Comparing the experimental results with computer models of how oxygen loss might occur, the team concluded that “an initial burst of oxygen escapes from the surfaces of particles, followed by a very slow trickle from the interior. Where nanoparticles glommed together to form larger clumps, those near the center of the clump lost less oxygen than those near the surface.”

Another important question, Chueh said, is how the loss of oxygen atoms affects the material they left behind. “That’s actually a big mystery,” he said. “Imagine the atoms in the nanoparticles are like close-packed spheres. If you keep taking oxygen atoms out, the whole thing could crash down and densify, because the structure likes to stay closely packed.”

According to the team, “Since this aspect of the electrode’s structure could not be directly imaged, the scientists again compared other types of experimental observations against computer models of various oxygen loss scenarios. The results indicated that the vacancies do persist – the material does not crash down and densify – and suggest how they contribute to the battery’s gradual decline.”

“When oxygen leaves, surrounding manganese, nickel, and cobalt atoms migrate. All the atoms are dancing out of their ideal positions,” Chueh said. “This rearrangement of metal ions, along with chemical changes caused by the missing oxygen, degrades the voltage and efficiency of the battery over time. People have known aspects of this phenomenon for a long time, but the mechanism was unclear.”

Now, he said, “we have this scientific, bottom-up understanding” of this important source of battery degradation, which could lead to new ways of mitigating oxygen loss and its damaging effects.

In the Illustration: Scientists at SLAC and Stanford have made detailed measurements of how oxygen seeps out of the billions of nanoparticles that make up lithium-ion battery electrodes, degrading the battery's voltage and energy efficiency over time. In the illustration, the pairs of red spheres are escaping oxygen atoms and purple spheres are metal ions. This new understanding could lead to new ways to minimize the problem and improve battery performance.