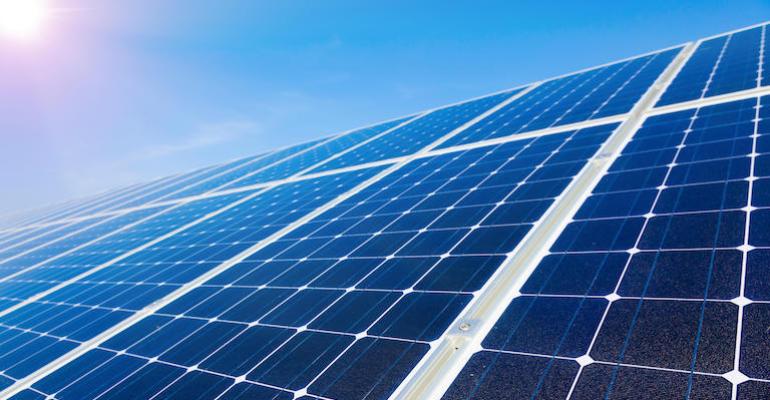 Researchers used the materials in the electron transport layer of photovoltaic devices to improve their performance.

Researchers have found a way to use quantum dots to help promising materials for next-generation solar cells scale up so they maintain their efficiency for the development of novel photovoltaic technologies.

Scientists at EPFL in Switzerland and the Korea Institute of Energy Research worked with perovskites, or hybrid compound materials with a crystal structure that long have been viewed as a leading next-generation material in solar cells to supplement or replace silicon. The material has several advantages over silicon, including higher efficiency and less cost in cell production.

However, one challenge with these materials—which also can be used in LED lights, lasers, and photodetectors--is that their power-conversion efficiency and operational stability drop as they scale up. This has made it challenging to develop complete solar cells using perovskites that maintain high performance.

Now a team led by Professor Michael Grätzel at EPFL and Dr. Dong Suk Kim at the Korea Institute of Energy Research have found a way to solve an issue with the electron-transport layer of perovskite cells using quantum dots, or nanometer-sized particles that act as semiconductors and emit light of specific wavelengths, or colors, when they illuminated.  A photovoltaic device’s electron-transport layer ensures that the electrons produced when the cell absorbs light will transfer efficiently to the device’s electrode.

Related: Technique Sheds Light on Optimization of Perovskites for Solar-Cell Use

In perovskite cells, the electron-transport layer is made with mesoporous titanium dioxide, which demonstrates low electron mobility and also is susceptible to adverse, photocatalytic events under ultraviolet light, researchers said.

To try to solve this problem, the team replaced the titanium dioxide electron-transport layer of their perovskite cells with a thin layer of polyacrylic acid–stabilized tin(IV) oxide quantum dots, which are known to have unique optical properties that make them well-suited to photovoltaic applications.

What researchers found is that this switching of materials had a two-fold benefit, they wrote in an abstract for a paper on their work published in the journal Science.

Nonradiative recombination is a phenomenon that sometimes occurs at the interface between the electron-transport layer and the actual perovskite layer that drains efficiency, researchers explained. By suppressing this and also allowing the devices to capture more light, the use of quantum dots enabled the solar cells to achieve significant performance benefits, researchers found.

Specifically, researchers reported that perovskite solar cells of 0.08 square centimeters that used quantum dots as the electron-transport layer attained a record power-conversion efficiency of 25.7 percent (certified 25.4 percent) in the devices. When increasing the surface area of the solar cells to 1, 20, and 64 square centimeters, power-conversion efficiency measured at 23.3 percent, 21.7 percent, and 20.6 percent respectively, they said.

The devices also featured high operational stability even when they scaled up, proving promising for the development of perovskite photovoltaic devices for commercial use on par with current silicon-based devices, researchers added.