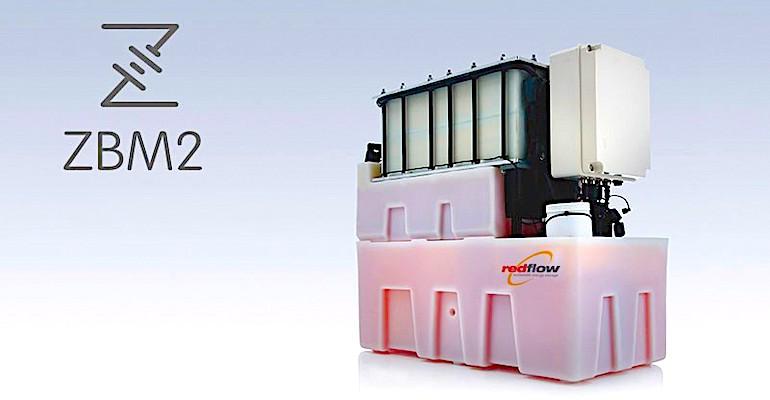 Australian company Redflow is building zinc-bromine flow batteries that are finding applications around the world.
As an alternative to lithium-ion batteries, various types of redox flow batteries are emerging as both safe and cost-effective.

It’s never a good idea to put all of your eggs into one basket. That time-worn advice is especially true for the energy storage industry. Lithium-ion batteries have a high energy density and relatively lightweight, making them presently the best commercial choice for devices that move—portable electronic devices and electric vehicles (EVs), for example. Batteries based upon lithium aren’t the only game in town, however, and if you need to store huge amounts of power, at a single stationary location, at a relatively low price, you probably are looking at flow batteries.

The structure of a lithium-ion battery is the key to its operation. It consists of a cathode (positive) electrode usually made up of nickel oxide along with some other elements like cobalt, manganese, and aluminum to help promote stability. The anode (or negative) electrode is typically layers of carbon graphite. In between the anode and cathode is an electrolyte (usually an organic solvent) that allows the transfer of lithium ions from one electrode to the other. When a lithium-ion battery is charged, lithium ions move from the metal oxide cathode, through the electrolyte, and imbed themselves between the layers of carbon graphite in the anode. This is called intercalation. During discharge, the ions move from the anode to the cathode where they intercalate within the structure of the metal oxide and in the process give up electrons that are used to power a device. The materials involved in all of this—primarily the cobalt, nickel, and lithium—are expensive, and the organic solvent used for the electrolyte is flammable and can cause safety issues.

A flow battery uses a fundamentally different principle. Instead of placing all of the reactive parts of the battery in one container, a flow battery stores reactive electrolyte liquids in separate containers and pumps them through a reactor tank containing a stack of inert electrodes that strip electrons out to produce electric power. An ion exchange membrane keeps the two electrolyte solutions separate from one another in the reactor. The capacity of a flow battery is simply related to the size of the containers holding the reactive liquids. Because energy is stored in the electrolyte, the amount of storage capacity can be sized independently from the power level.

The key, of course, is what materials to use for the two electrolytic solutions. They must form what is called a reduction-oxidation (redox) couple, where reduction is the gain of electrons and oxidation is the loss of electrons. Popular choices for commercially available flow batteries are made from either zinc and bromine or a combination of various oxidation and reduction states of vanadium.

In the zinc-bromine flow battery, an aqueous solution of zinc bromide electrolyte is stored in two tanks. During charging or discharging, the electrolytes are pumped through a reactor and back into the tanks. One tank stores the electrolyte for the positive electrode reactions, and the other for the negative.

During charging, metallic zinc is plated from the electrolyte solution onto the negative electrode surface in the reactor. At the same time, bromide is converted to bromine at the positive electrode surface and is stored in the electrolyte tank. Bromine is a chemical element in the periodic table and exists without a charge, bromide is the anion that forms when bromine abstracts an electron from another element, in this case, zinc. On discharge, the reverse process occurs as the metallic zinc plated on the negative electrode dissolves in the electrolyte, and bromine is converted back to bromide.

The Australian company Redflow builds a zinc-bromine flow battery that has found applications for time-shifting energy for power grids, providing storage for renewable energy sources, and providing emergency power. The company claims, “Redflow batteries can charge and discharge 100 percent of their energy capacity each day, avoiding the damage such performance causes traditional battery chemistries.”  The Redflow flow batteries, “can also maintain their nominal 10 kilowatt-hour (kWh) storage capacity throughout their operating life operate at ambient temperatures as warm as 50 degrees Celsius (122 degrees Fahrenheit) without any external active cooling.” They can be left in any state of charge for long periods and because the zinc bromide electrolyte is a non-flammable solution, they are considered very safe. Redflow batteries are made from materials that are easy to recycle or reuse.

Another type of commercially available flow battery is called a vanadium flow battery (VFB). These were first developed in the 1980s. Vanadium is unusual in that it can exist in four different oxidation states (V2+, V3+, V4+, and V5+), each of which holds a different electrical charge. A VFB uses two separate tanks of vanadium electrolyte that hold different charges and that are connected to a central fuel cell stack.  Electrolyte from the tanks is pumped through the fuel cell stack, where an ion exchange occurs across a membrane. When this exchange occurs, a reversible electrochemical reaction takes place, allowing electrical energy to be stored and subsequently returned. Because the vanadium is dissolved in an aqueous solution, there is little fire risk.

A major supplier of VFBs is Invinity Energy Systems, which was formed by a merger last year between US-headquartered flow battery provider Avalon Battery and UK counterpart redT. Avalon was the supplier of a battery system to a microgrid project for a solar installation company in California which allowed Sandbar Solar’s headquarters to run on solar energy full-time. To date, Invinity has installed VFBs at more than 40 sites across Europe, North America, Africa, Asia, and Australasia.

Invinity has pushed vanadium flow battery technology into commercialization and is specializing in utility-scale applications.

Other materials can be used to create flow batteries, Oregon-based ESS, for example, is commercializing a flow battery that uses inexpensive iron chloride at different oxidation states to develop its voltage potential, creating a battery that is a less expensive alternative to zinc-bromine or VFBs. Organic compounds that can change their charge states are also under study for use in safe, low-cost flow batteries.

Because of their size and bulk, flow batteries have been primarily considered for stationary applications. But the idea that the electrolytes could be rapidly exchanged for freshly charged solutions is appealing, especially for EVs. General Electric has been looking into flow batteries for EVs since 2013 but as yet the promise of an EV that can be refueled as quickly as a gasoline-engine car has not been realized. Other even smaller flow batteries have been proposed but have not reached commercialization.

Meanwhile, companies like Tesla continue to push lithium-ion technologies for utility-scale storage. In some ways, because lithium-ion is the battery technology of choice for laptops and EVs, it has a foothold in the storage market that flow batteries can’t match, even at their lower cost and longer service life. That will eventually begin to change—the energy market is primarily driven by cost and safety—both of which are areas that flow batteries can demonstrate advantages. As the cost of lithium-ion battery raw materials continues to increase, the flow battery will begin to take over in utility-scale applications.