The Role of Submarine Batteries in Undersea Warfare Technology 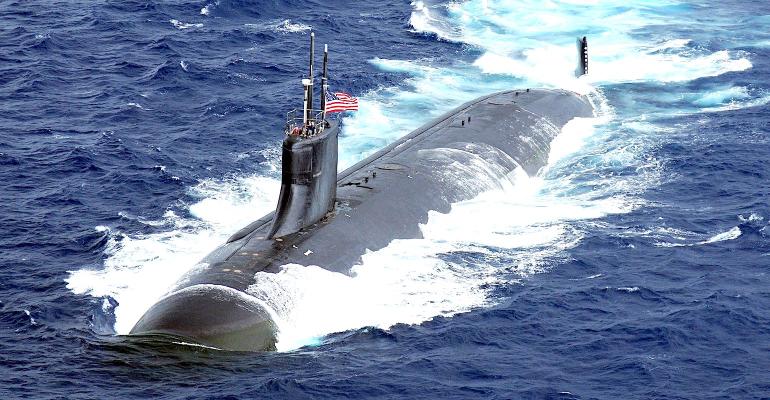 Even modern nuclear-powered submarines still use lead-acid batteries as a backup electrical power source.
Batteries have been and will remain an important part of undersea warfare technology.

If you have watched any movies about World War II submarines, you’ll know that batteries played an important role. Beyond a Hollywood plot point, the ability of a submarine to operate underwater and return to the surface was largely due to a large bank of lead-acid batteries that required nearly constant attention by the boat’s crew.

The very first submarines used human power to turn a crankshaft connected to an outside propellor. It didn’t take long for the limitations of human strength to bring about a realization that, to be effective, submarines would need more than muscle power. In the 1800s, steam power was tried, as was the earliest form of gasoline engines, but the combustion required to provide underwater locomotion quickly used up all of the breathable oxygen within the submarine’s confines. Another solution was needed, and rudimentary batteries and electric motors provided a solution.

Polish engineer Stefan Drzewiecki in Russia created the first electric submarine in 1884. By 1888, the French-built Gymnote was launched.  Equipped with an early periscope and an electric gyrocompass for navigation, it completed over 2,000 successful dives using a 204-cell battery.

Irish inventor John Philip Holland designed the Holland Type VI submarine in 1897. It made use of a 45-horsepower internal combustion gasoline engine for power on the surface and a 50-horsepower electric motor and a 66-cell Exide battery for propulsion when submerged.  The batteries gave a 35-mile range at 6.3 mph while submerged.  Launched in Elizabeth, New Jersey, the Holland VI was purchased by the United States Navy on 11 April 1900, renamed the USS Holland, and became the United States Navy's first commissioned submarine. The Navy eventually purchased 7 more submarines from Holland to help create its first submarine fleet.

The first U.S. Navy submarine was the USS Holland.

For safety and to achieve a longer range, diesel replaced gasoline for surface propulsion in the Swedish-built HMS Hajen in 1902, and the combination of diesel and electric power became the standard for submarines until the nuclear age began in 1954.

Germany’s U-Boats were effective during World War I, especially against merchant shipping in the later parts of the conflict. Although not as fast on the surface as other warships, at least initially the German submarines were nearly undetectable when submerged. They were vulnerable to attack by enemy ships when using their diesel engines to charge their batteries on the surface. U-boats used lead-acid storage battery cells, located under the boat’s living spaces. Hydrogen gas, generated on both charging and discharging of the batteries, was an explosion risk and had to be vented through the hull. Failure of the ventilation systems could be catastrophic—the fate of several U-boats. Filled with acid and distilled water, the battery cells would generate poisonous chlorine gas if seawater leaked into them.

The navies of the victorious Allies-Britain, France, Italy, Japan, and the United States all received examples of the latest German U-boats under the terms of the Armistice and the Treaty of Versailles. These were examined and analyzed for the incorporation of new ideas into their own submarine designs. Although the German Navy was prohibited from building submarines by the Versailles Treaty design and construction work by German firms was undertaken for foreign navies. When the Versailles Treaty was repudiated by German in 1935, it only took a few weeks before the first new German U-boat, the U-1, was completed. In all, 1,150 U-boats were commissioned between 1935 and 1945.

The US submarine fleet really grew and came into prominence during World War II, with 263 submarines undertaking war patrols. American fleet submarines had two batteries, each of which was composed of 126 lead-acid cells. Each cell in a submarine battery produced from 1.06 volts when fully discharged, to 2.75 volts at the optimum output. The cells could be connected in series to give a usable output of from about 210 to 350 volts, and in parallel for a power output of as much as 15,000 amps.

Each battery cell was about 54 inches high, 15 inches deep, and 21 inches wide, and weighed about 1,650 pounds. The primary manufacturers of the batteries were the Exide Corporation (now Exide Technologies) and the Gould Storage Battery Company (absorbed by JX Nippon Mining in 1988). As a precaution against leakage, each battery cell was maintained in a separate acid-proof tank. The sulfuric acid electrolyte was highly corrosive and could seriously weaken the pressure hull if a leak went undetected.

The S-class submarine from the 1920s shows the space taken up by lead-acid batteries.

As with World War I U-boats, when the cells were charged and discharged, hydrogen gas was produced. To avoid an explosion hazard the hydrogen was expelled through the hull via an elaborate ventilation system. The problem of the generation of poisonous chlorine gas was also present if seawater accidentally got mixed with the sulfuric acid electrolyte.

Charging could be accomplished while running on the surface, or while submerged and running on the diesel engine that breathed through a snorkel system.

The battery cells a required daily service that consisted of topping up the cells with distilled water, from large tanks that were adjacent to the battery compartments. As with earlier submarines, the batteries were placed low in the hull to help with the boat’s stability. Above the batteries were officers’ staterooms, wardroom, and chief petty officers’ quarters above the forward battery and the main crew berthing area above the after battery.

Everything about submarines changed in 1954 with the launch of the USS Nautilus nuclear-powered submarine. With steam turbines and vast amounts of electrical power to purify water and air, she could remain submerged for months at a time and travel vast distances at high speeds. Interestingly, nuclear submarines still carry lead-acid battery packs to be able to operate and surface in the event of a problem with the nuclear reactor and generator.

The use of heavy lead-acid batteries not only provides backup power in nuclear submarines but can also provide ballast. Because the air within a submarine provides buoyancy, the large mass of the lead in lead-acid batteries helps pull the vessel underwater when it is time to submerge. It is possible to use lighter weight batteries, but likely the submarine would then still need lead ballast to help maintain its neutral buoyancy when submerged.

There is interest however in using more modern lithium-ion batteries to power submarines. Two Soryu-class submarines have been outfitted with diesel-electric power that uses lithium-ion batteries in place of lead-acid cells. Lithium-ion batteries, particularly in non-nuclear powered submarines provide an advantage in both speeds, due to their high power output, and range, because of their high energy density. Lithium-ion batteries also require little or no maintenance and promise a much longer useful life, as long as they are carefully monitored to avoid thermal issues. Dr. Rolf Wirtz, CEO of Thyssen Krupp's naval business said in a company news release, “The use of the new battery technology has enormous tactical advantages. We are entering a new era of submarine construction.”