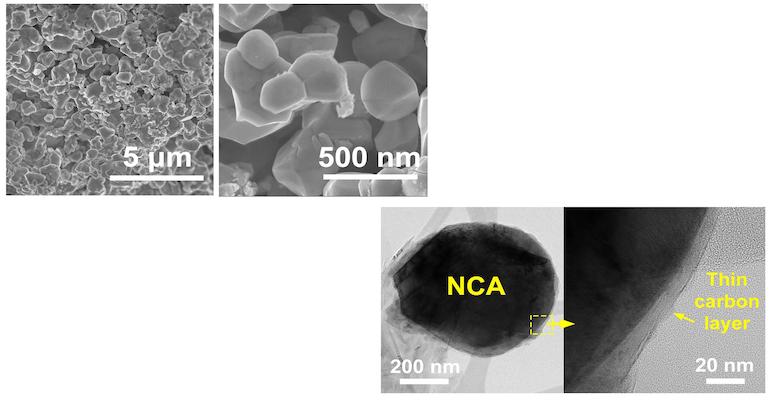 Pictured is a scanning electron microscope image of a deformation in the jelly roll of a cycled lithium-ion cell. Arrows show delamination and cracking in the coating, which researchers from the University of Warwick mitigated by convection cooling of the center of the cell.
Research shows how devices can be pushed safely past manufacturer limitations for cycling.

Researchers have made a key discovery about how lithium-ion battery cells age that can inform the design of more resilient, high-rate devices for future use in electric vehicles (EVs) and other applications that require heavy lifting.

A team at the University of Warwick led by Lead Engineer Justin Holloway investigated the impacts of high-current operation on how commercial batteries age to see how many times they can be cycled safely beyond the manufacturer’s recommendations.

What they found was a window of opportunity for operating batteries above the manufacturer’s stated limits, though thermal fatigue is a key driver for degradation factors that affect battery performance and can even create potentially dangerous scenarios.

“We need to ensure that batteries operate in as the safest manner possible, and for an appropriate practical lifetime, which is why the manufacturers have these limits,” Holloway said in a press statement.

During testing, researchers boosted current fluxes up to 100 C cycling conditions. They found that charge and discharge current capabilities were possible at magnitudes of 1.38 and 4.4 times, respectively, which was more than the manufacturers of the cells recommended. The increased current was applied for 500 charge-discharge.

“We tested a commercial lithium battery above the recommended manufacturers currents and found that the cell could tolerate high-rate cycling, however for a short and impractical lifetime,” Holloway explained to Battery Technology. However, he added that researchers don’t recommend the use of the batteries above these limits, as manufacturers specify them for a reason.

Indeed, researchers found some drawbacks to pushing batteries beyond recommended charging. The application of currents caused a rapid decrease in capacity in the first 60 cycles, as well as an increase in resistance.

Further, they resulted in the increase of cell temperature, during both charge and discharge with natural convection during the rest step cooling the cell. Pushing batteries past their optimum temperature range can cause components and chemicals to start decomposing inside them, researchers said.

Perhaps most importantly, the tests the researchers conducted discovered deformation of the  “jelly roll,” or coiled electrodes and separator, that included the formation of lithium plating from testing and aging. These deformations radiate out from the center of the cell in an axial direction towards the outside of the cell, which suggests that the cell’s core was the hottest, researchers said.

“We found that the jelly roll deformed with cycling – the charging and discharging caused thermal gradients (and stresses) which led to deformation,” Holloway explained to Battery Technology. “We identified this as the failure mechanism ‘thermal fatigue’ -- where the jelly roll deformations grew progressively with cycling while it was constrained mechanically by the rigid outer can and center pin.”

Identifying this failure mechanism can thus allow for remedial action, he said.

“In this case, the deformations (thermal gradients) could be mitigated and controlled if convection cooling was applied to the center of the cell where the cell was the hottest,” Holloway told Battery Technology. “This would, in turn, allow the cell to maintain capacity and resistance (lifetime) criteria for longer.”

This would allow for batteries to be pushed by limits in a way that does not pose a threat nor does it affect performance, Holloway said.

“We are, however, saying that these cells are quite safe given they could sustain higher than specified currents without undergoing thermal runaway (catastrophic failure),” he told Battery Technology.

Researchers published a paper on their work online.

The team plans to continue its work to analyze how batteries and battery systems fail by determining the mechanisms of failure, Holloway said.  “By identifying these mechanisms will allow remedial action or actions so as to improve the safety and the lifetime of these devices,” he told Battery Technology.

Lifting the Limits of Battery Cathodes with Lithium
Mar 25, 2021