Seismic Shift! Tesla Will Move to LFP Batteries For Some Model Y and Model 3 EVs 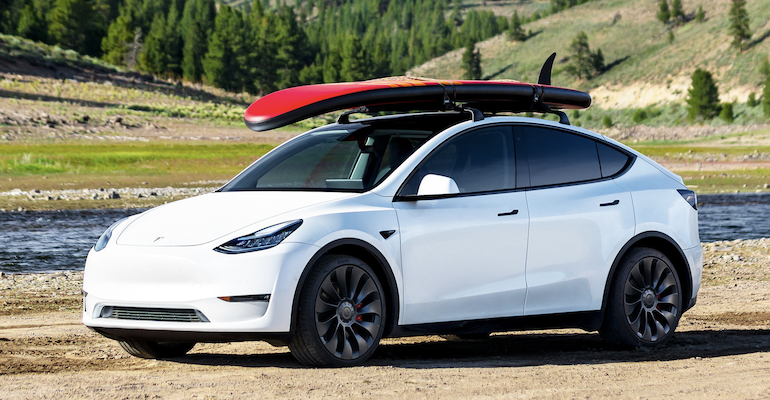 Tesla Model Y
Not only a change in chemistry but also a move away from cylindrical cells is in store for its standard range models.

Last year, Tesla began using lithium-iron-phosphate (LFP) battery cells in the Model 3s that it manufactures in China. These specific-types of lithium-ion cells are manufactured by China’s Contemporary Amperex Technology Co. (CATL) which is considered to be the world’s largest battery maker. Now, Tesla says it intends to bring LFP battery production to the same locations where it manufactures its vehicles and to switch to LFP batteries for all of its standard range Model Y and Model 3 vehicles. This news was contained in the company’s 2021  third-quarter earnings report released on October 20.

To understand the implications of this switch it is important to know what kind of lithium-ion battery chemistry Tesla has been using to this point. Tesla’s battery technology, developed with Panasonic, has used a nickel-based cathode material called NCA. This cathode contains a mixture of nickel, cobalt, and aluminum and allows high energy density for the long-range between charges for which Tesla vehicles are known. But nickel and cobalt are expensive and Tesla CFO Zach Kirkhorn said during the earnings call that recent increases in prices have created impacts with both nickel and aluminum. Because nickel-based cathodes have a high energy density, they also must be managed carefully to maintain safe operation.

Related: The 8 Most Important Materials That Will Drive the Battery Market

Instead of using a nickel-based cathode, cells made from lithium, iron, and phosphate (LFP) can be used in electric vehicles (EVs). In Tesla’s case, the change from NCA to LFP has meant moving away from the 18650 cylindrical shape battery cells to a different format called prismatic cells inside the battery pack.

Because the LFP raw materials cost less, these batteries are cheaper, and with a lower energy density, they are generally considered safer than those with nickel-based cathodes. The lower energy density does result in less stored energy in a battery pack, reducing the vehicle’s range. In EPA testing the Model 3 Standard Range with NCA chemistry can go 263 miles on a charge. According to information sent by Tesla to its US customers the estimated EPA range of the Tesla Model 3 SR+ with LFP battery drops to 253 miles.

Related: How Much Are the 14 EV Makers That Come After Tesla Worth?

“Our goal is to localize all key parts of the vehicles on the continent — at least the continent, if not closer, to where the vehicles are produced,” Drew Baglino, senior vice president of powertrain and energy engineering at Tesla, said during the earnings call. “That is our goal. We’re working internally with our suppliers to accomplish that goal, and not just at the end assembly level but as far upstream as possible.”

Here is a video of Tesla’s 3rd Quarter meeting:

These are the 9 Best Electric Vehicles for Efficiency Available in the US
Aug 31, 2021

15 Examples of How EV Variety is Defining a New and Wonderful World of Wheels
Sep 21, 2021